A surprising entry has just been spotted by TUM_APISAK, showcasing Intel's Core i7-10700K 8 core and 16 thread desktop CPU with a clock speed of up to 5.3 GHz. The Intel 10th Generation Comet Lake-S CPU lineup has got many changes over the last couple of months but it looks like the chips would end up featuring the fastest clocks we have ever seen on mainstream consumer processors.

The Intel Core i7-10700K would be part of the 10th Generation Comet Lake-S desktop family. The family would reuse the 14nm architecture and process node, but bring faster clock speeds and a more competitive core configuration to tackle AMD's Ryzen 3000 series processors. We have seen the specifications for the entire lineup leak previously but the latest entry shows surprisingly higher clock speeds than what was reported earlier.

Before we get into details, originally, the Core i7-10700K has been reported to feature 8 cores and 16 threads. The chip comes with a base clock of 3.8 GHz, a boost clock of 5.1 GHz on a single and a 4.7 GHz boost clock across all cores. The chip carries 16 MB of cache, a TDP of 125W, and should be priced close to the existing Core i7-9700K with the chances of Intel cutting the prices even more to stay competitive.

However, while the previously reported information has hinted at a boost clock of up to 5.1 GHz on a single core, the latest entry for the chip reports a boost clock as high as 5.3 GHz which is seriously impressive. It is possible that Intel is using the highest binned dies for the K series parts this time around, similar to what they did with the Core i9-9900KS. Opening up multi-threading support also helps the chip a lot to tackle AMD's Ryzen 7 3000 series processors. This might explain the delay in the launch of the 10th Generation desktop parts and why we have seen different specifications for the chips in the past. 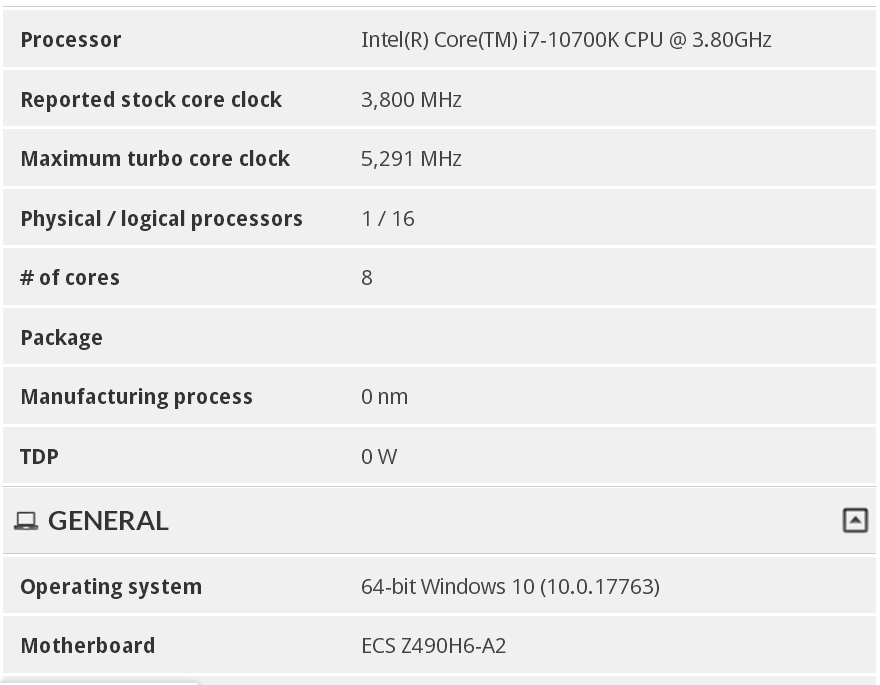 What remains to be seen now is whether this change is just exclusive to the Core i7 parts or the rest of the lineup will also get a similar clock speed bump. Since we are looking at binned dies, it's possible that power consumption would not be entirely out of proportions and we might even get some (even if little) overclocking headroom out of these chips. The main thing that we should be concerned with is whether these higher clock speeds are just short bursts (as Turbo Boost 3.0 is supposed to work) or would be a more sustainable clock speed for the chip (under a suitable AIO / Air cooling setup).

In addition to the details, some performance benchmarks for various chips have also been spotted with the Core i9-10900K making an appearance in both 3DMark Firestrike and 3DMark Time Spy. It shows decent performance results, showcasing a 5% performance lead over AMD's 12 core and 24 thread Ryzen 9 3900X CPU which costs $500 US. The Intel Core i9-10900K is also expected to end up being priced at the same range.

With that said, the power consumption is still likely to be much higher than AMD Ryzen 3000 parts, which are based on the 7nm process node which has been made apparent in recent details by AIB and board manufacturers. One other main issue with the lineup is that it would be pitted close to AMD's Zen 3 based Ryzen 4000 lineup which is expected to debut in the second half of 2020.

AMD may not even consider offering a price cut as their Ryzen 3000 are competitive enough to compete against Intel's 10th Gen parts unless Intel brings Core i9 down to $350-$400 US which seems unlikely, but then again, they have the financial horsepower to do so to remain competitive in the desktop segment. Intel's 10th Gen lineup may offer multi-threading on all parts along with higher clock speeds, but they would require more power and beefier cooling which is a trade-off for going with a high-end Intel setup these days.

What will be the best choice for Intel's 10th Gen Comet Lake-S Desktop lineup to compete against AMD's Ryzen 3000 CPUs?
Share Tweet Submit