So full disclosure, I am not even sure why I am covering this. Intel has accidentally confirmed something we already knew for a very long time: Sapphire Rapids will be based on the next-generation Golden Cove architecture. This is something that was caught by Videocardz when Intel's Andi Kleen submitted the following Linux patch.

Intel: Sapphire Rapids X is based on Golden Cove, not Willow Cove

The full patch can be seen on Kernel.org, the official patch site for linux. 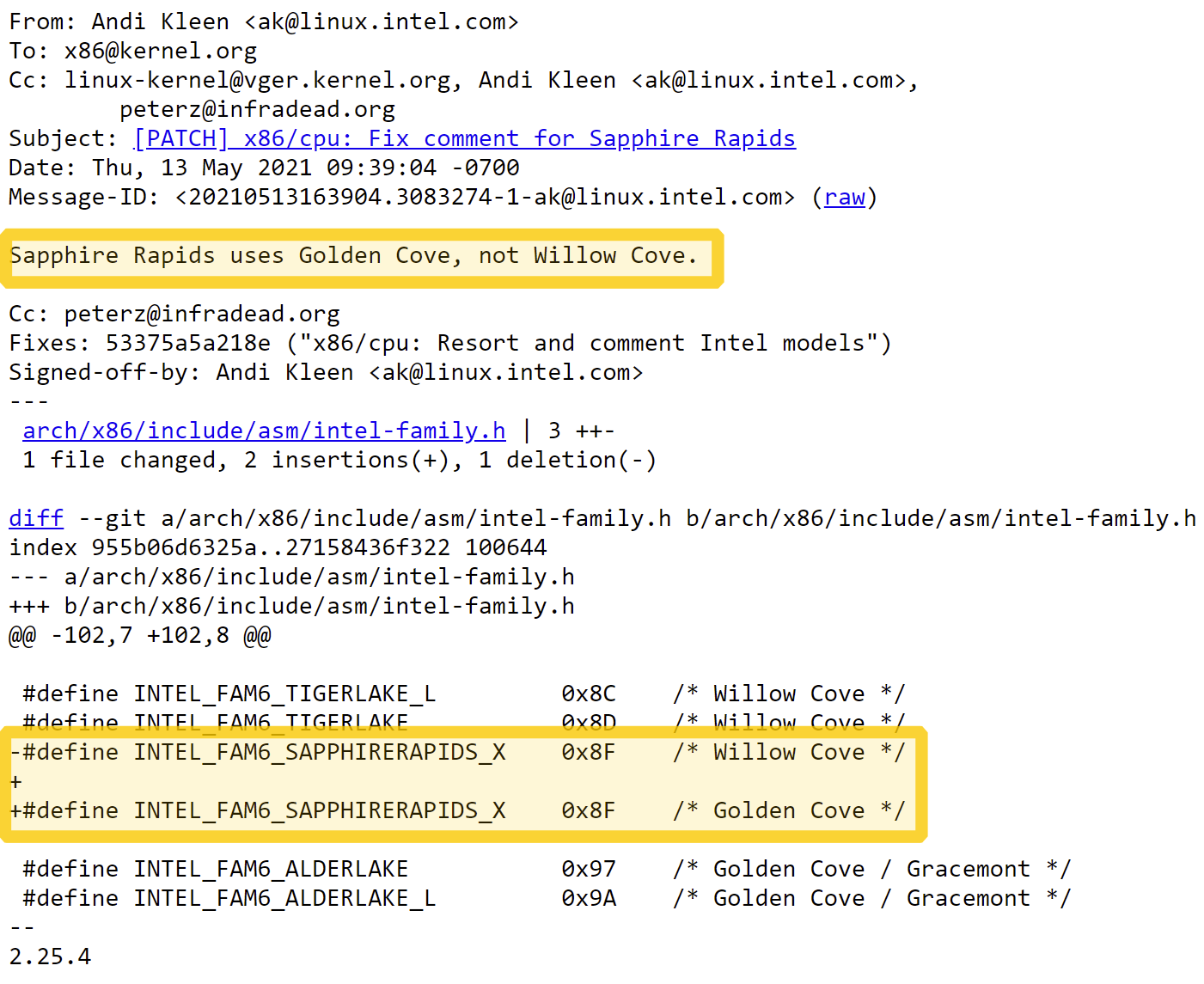 Of course, there are a lot of juicy leaks about Sapphire Rapids floating on the grapevine, the most exciting ones being about a potential MCM design. If you want to read verified, Intel disclosures only, click here, if not, keep reading.

At their Architecture Day 2020, Intel confirmed the launch of its upcoming Sapphire Rapids CPU platform in 2021. Sapphire Rapids will feature support for DDR5 memory and PCIe 5.0 and will truly be a "next-generation" data center chip with the addition of the CXL 1.1 interconnect. The company has also plans to release the OneAPI (going gold) later this year which should tie up their master plan of a unified datacenter ecosystem quite nicely.

While the company did not reveal the exact process Saphire Rapids is based on, we can infer that it will likely be based on the company's 10nm SuperFin Enhanced process because it succeeds Ice Lake processors (which are based on vanilla 10nm) and because it uses TME (Total Memory Encryption is an architectural design that encrypts the memory completely so even if someone dumps the RAM - they would just get garbage data). This feature is also present in Tiger Lake - which is based on 10nm SuperFin - which lends credence to Sapphire Rapids being based on the same (or more advanced) process as well.

AMD has already promised new memory along with new capabilities for the Genoa lineup which would include support for DDR5, PCIe 5.0, and more. Intel plans to tackle AMD in two key departments with Sapphire Rapids, one being increased per core output (performance) and decreased TCO($) per core. With CXL and a complimentary Intel ecosystem in place, single-threaded performance alone is not enough to justify a transition to AMD parts - or at least that is what Intel is rationalizing. 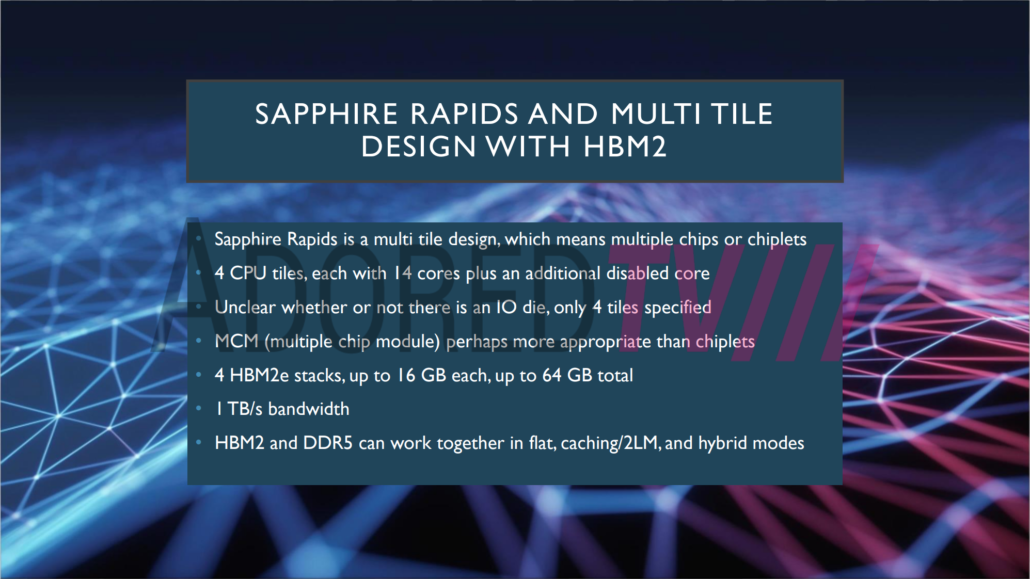 According to the slides prepared by AdoredTV, the Sapphire Rapids constructions will consist of 4 CPU tiles with 14 cores each. There will apparently be a disabled core present in each tile as well (likely due to yield issues) which means that the overall core count could extend to 60 cores if yields improve significantly. It also does not appear that Intel's design will use an IO die - considering their past philosophy with mesh architectures.

The Saphhire Rapids CPUs will contain 4 HBM2 stacks with a maximum memory of 64 GB (16GB each). The total bandwidth from these stacks will be 1 TB/s. According to Matthew's source, HBM2 and GDDR5 will be able to work together in flat, caching/2LM and hybrid modes. The presence of memory so near to the die would do absolute wonders for certain workloads that require huge data sets and will basically act as an L4 cache.

Moving on, we learn that Sapphire Rapids will ship with 80 PCIe 5.0 lanes on the flagship parts and up to 64 lanes on the rest. CXL is supported and DDR5 memory up to 4800 MHz will be present as well. The channels remain at 8 channels per CPU. Optane memory is supported as well, naturally. The source also confirms the use of Golden Cove architecture (which is also present in Alder Lake) and will significantly increase IPC over ICL (which is not based on SuperFin by the way). Bfloat 16 will be supported as well for AI-related workloads and initially, we will only get the 56 core versions.

The source also mentioned some caveats associated with Sapphire Rapids. The TDP of the processors are going to be a whopping 400 watts for the higher-end parts. To be clear, however, the wattage of a datacenter processor doesn't matter. It has to be offset by performance gains and only the TCO (or Total Cost of Ownership) really matters in this environment. 300 Watts for the lower end parts is still, however, significantly higher than AMD's Genoa CPU which is going to ship sometime in late 2021. According to the report, Intel will launch Sapphire Rapids just before AMD's Genoa launch.

Sapphire Rapids is shaping up to be an absolute beast of a platform on paper. We can all hope that real life performance is up to par with all these specifications because lately the company hasn't been able to provide much competition to AMD. One thing is for sure though, 2021 is going to be an absolutely spectacular year for technology enthusiasts as the semiconductor wars heat up to new heights.