Intel to Commence Production of 14nm Broadwell Processors in Q4 2013

Intel announced that it would start mass production of its 14nm node at three of its fabs would begin by Q4 2013, these include the D1X  (Oregon Fab), Fab 42 (Arizona Fab) and Fab 24 (Ireland). The D1X Fab would be expanded to make room for processing industry's first 450nm wafers using 14nm technology process. This would eventually lead to the mass production of Intel's upcoming 14nm Broadwell Processors. The Broadwell processors currently are scheduled for launch in 2014.

We will spend roughly $2 billion to start building our first 450mm [D1X module 2] development facility [in 2013]. […] When we look at 2015 as the time when we can have [450mm] equipment available, we want to start […] construction of a big development facility [now]. [Construction] is typically a couple of year’s cycle,” said Stacy Smith, the chief financial officer of Intel. Xbitlabs 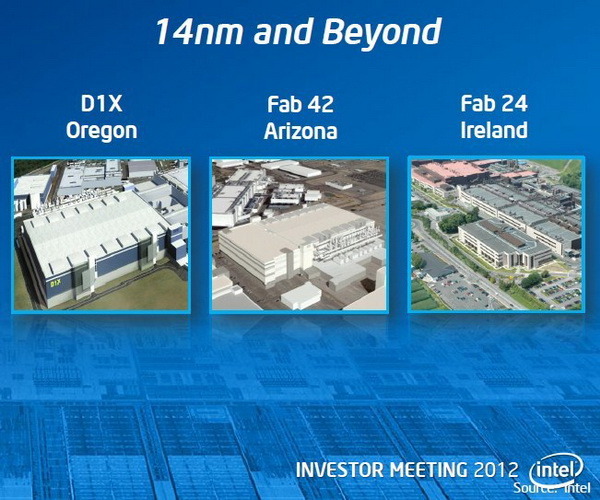 It is to be known that by Broadwell Processor generation, Intel would slowly start making a transition to BGA styled packages and the process would be complete in 2016 with the launch of 10nm Skymont CPUs. The BGA package compared to LGA cannot support interchangable processors which limits the users from upgrading their PCs. We would have to wait till 2014 with Broadwell generation to see if Intel wants to bring BGA to the PC market. Currently, BGA packages do exist on Intel's NUC platform (Next Unit of Computing).