Intel was previously rumored to start mass production of their Broadwell-E processors in Q1 2016 but now a report from BenchLife seems to point out that Intel will also launch their flagship processors during the same quarter. The Broadwell-E platform which comprises of X99 based motherboards and Broadwell architecture based 8 to 6 core processors will be the latest addition to Intel's HEDT (High-End Desktop) lineup.

The schedule for Broadwell-E reveals that ES sampling of the processors will commence in Q4 2015 followed by QS sampling that will mark the transition to final software optimization in late December 2015 - Early January 2016. The mass production of these processors will start in February-March 2016 which indicates that we might see an announcement from Intel at CeBIT 2016 in March '16. It is not known whether Intel will actually launch these processors at the same day but the source indicates that the chips are indeed heading for a Q1 2016 time frame as far as launch is concerned. The news seems to hold some credibility since Intel has already confirmed to launch their Broadwell-EP Xeon E5-2600 V4 processors in Q4 2015. These new processors will feature up to 22 cores, 44 threads and have compatibility on the existing Brickland platform that is based around the C610 series chipset.

The Broadwell-E will be the main HEDT platform for 2016 while Skylake-E will be pushed to 2017 and the main stream platform will see Kaby Lake family around Q3 2016. Intel has already announced the delay of their new 10nm node to 2017, hence Cannonlake has been repositioned for a future launch. The Broadwell-E processors will have full support on the existing X99 platform that consists of LGA 2011-3 socket based motherboards and DDR4 memory compatibility. 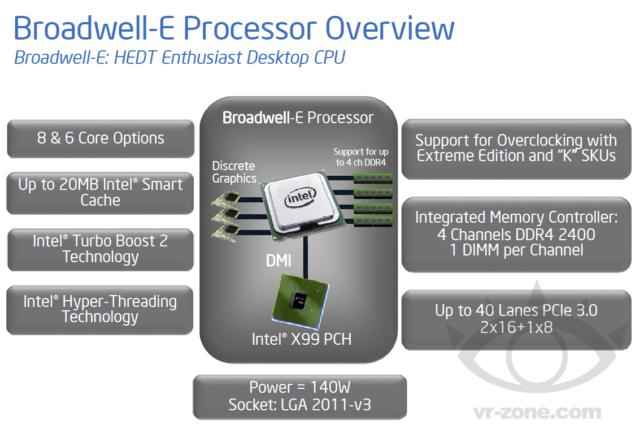 There are no confirmed SKU names at the moment but details from previous reports confirm that Intel will have 8 and 6 core SKUs. This means that we will see a similar launch lineup as Haswell-E with a single X SKU featuring 8 Cores and two K SKUs featuring 6 cores. The Extreme Edition processor will have 20 MB L3 cache, full support of the latest overclocking features found on Intel processors and support for DDR4-2400 memory. These processors will have up to 40 PCI-Express lanes and capable of two full x16 and a single x8 PCI-Express slot. The maximum TDP of these chips will be 140W which is same as the Core i7-5960X and we will see small bumps in the clock frequencies along with IPC improvements that Broadwell received. Since Broadwell-E still packs an older architecture to Skylake, we will see FIVR (Fully Integrated Voltage Regulator) on these chips. Prices will remain at $999 US for the flagship, around $500 US for the mid-tier chip and around $400 US for the entry level chip.