Haswell-E was released less than two months ago and news of Broadwell-E has already begun to trickle through. Unfortunately it's not particularly good news this time around. According to Chinese.VR-Zone Broadwell-E will not go into mass production until Q1 2016. 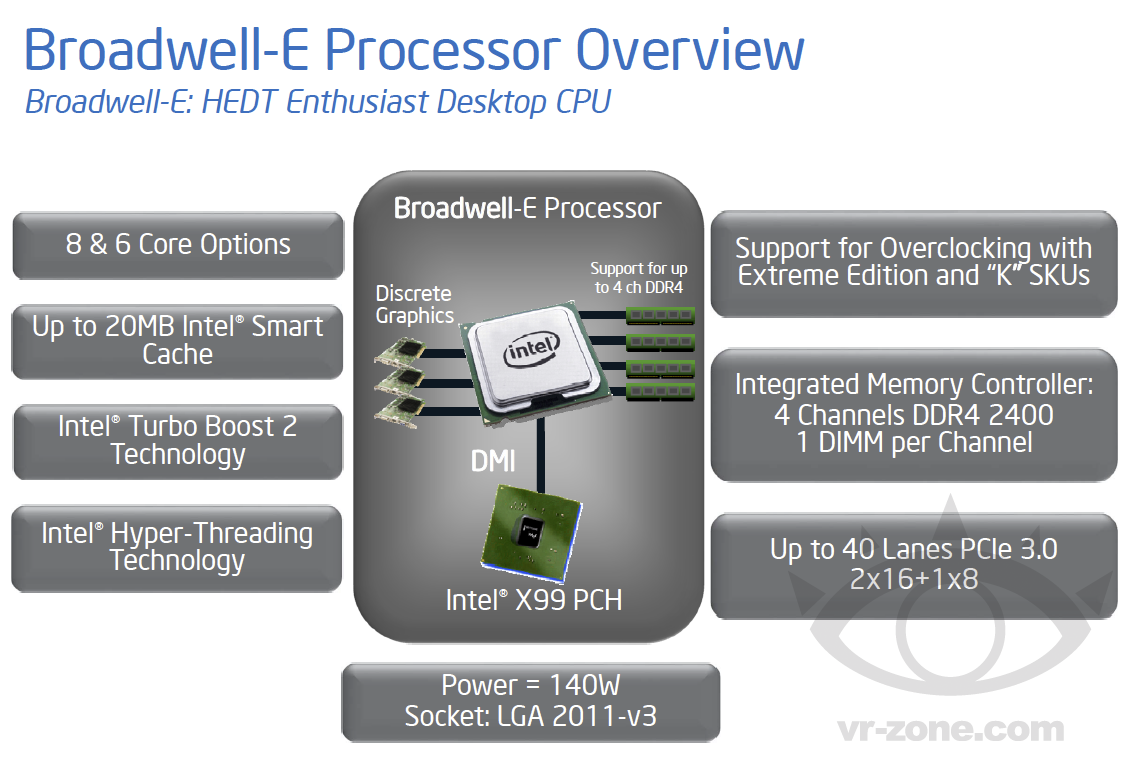 Even though this is not particularly good news it's not that surprising either. Considering Haswell-E did not show up until more than a year after mainstream desktop Haswell parts arrived. Intel will announce various Broadwell mobility parts in CES 2015. With desktop Broadwell-K chips supposedly coming in the second half of 2015 along with locked mainstream Skylake desktop CPUs. This puts the launch Schedule of Broadwell-E about a year behind mainstream desktop parts. Which coincides with the typical cadence that Intel has adopted in recent years.

Intel Will Begin Mass Production of Broadwell-E in Q1 2016

The leak indicates that Broadwell-E CPUs will maintain six and eight core configurations. With both unlocked K parts and a flagship extreme part. The processors will maintain LGA 2011-3 socket compatibility. TDP is also maintained at 140W which is unusual. Considering Broadwell-E chips will be built on Intel's more efficient 14nm process. I would've expected to see considerably lower power with Broadwell-E. Unless Intel clocks these chips considerably higher than Haswell-E parts. I don't see how this TDP can be justified.

Perhaps what's more exciting is the fact that Broadwell-E will likely not go uncontested. With news of AMD's Zen core telling of an early 2016 launch. We should see Zen competing with both mainstream Skylake and enthusiast Broadwell CPUs. And after confirmation from AMD's CEO that next generation products based on Zen will be built on FinFet. We might see AMD come out with a truly competitive product. Both in terms of performance and manufacturing process for the first time in almost a decade.

The company has had a roller coaster ride on the CPU front for many years. Thanks to Intel's manufacturing process lead in the semiconductor industry. AMD always had to manage to compete with a less advanced process node. Often leading to lower power efficiency and lower profit margins compared to the Intel offerings. So the prospect of AMD finally being able to deliver a product on a comparable process node to Intel is very exciting indeed. Combined with a brand new CPU uArchitecture "Zen" 2016 is shaping up to be a fascinating year on the CPU front.