VR-Zone has revealed interesting details regarding the upcoming Intel Broadwell and Haswell Refresh platforms which show that the new processors would only be compatible with the revised 9-Series chipset motherboards.

The Intel Broadwell platform would be compatible only with the 9-Series (Z97 and H97) chipset motherboards which is pretty weird since Broadwell is nothing more than a 14nm die shrink of 22nm Haswell processors. Sure it does comes with its small amount of updated features such as faster graphics and lower power consumption but moving it over to just a single PCH compatible is not a good decision by Intel when the Haswell refresh platform is backwards compatible with 8-Series and 9-Series chipsets. It has been detailed that the reason behind this could probably be the new power supply ratings implemented by Intel for their Intel Broadwell processors.

When Haswell was launched, users were required to get a power supply with 0.05 amps on the 12V2 line. With Intel Broadwell, you won't require to purchase a new power supply but your motherboard should be compatible with the new power supply ratings, ones which would only be available on the new 9-Series chipset boards. For Intel Broadwell, users require V_PROC_IO connection with a 1.05V power source, VCCST Power supply and a new THRMTRIP output buffer that requires the platform change.

While 9-Series chipset brings nothing new except SATA Express that may become a major role player when Intel implements SSD overclocking in their upcoming platforms and the ability to support Broadwell processors with the new power supply rating, VR-Zone also reveals that the leaked information has two batch of details regarding the memory bus. One slide mentions DDR3 while the other mentions DDR4, which one to see? More details are expected regarding Intel's future platforms at IDF13 San Francisco. If Intel goes this early on DDR4, it would mean that AMD would be left out of the game until 2015 when they will release their excavator powered Carrizo APU. Intel's own Haswell-E and Skylake processors are expected in 2014-2015. 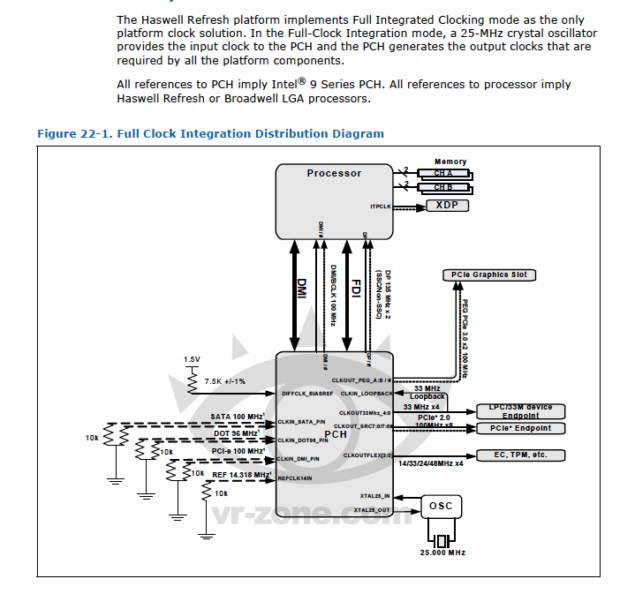