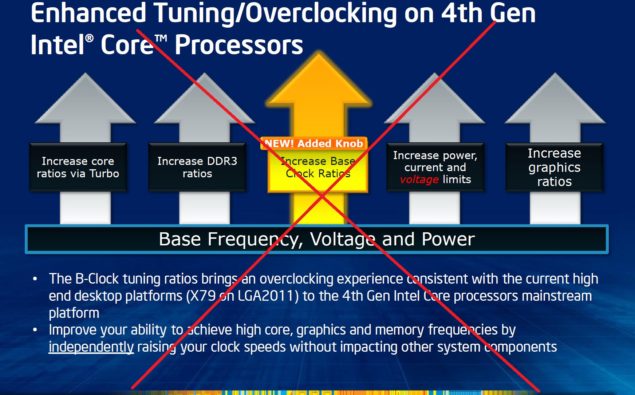 It has just been over a month since Haswell's introduction and manufacturers have already found a way to get past the overclocking restrictions imposed by Intel on their H87 and B75 chipset based offerings. ASRock was the first to introduce the so called Non-Z OC feature for Haswell processors and was later offered by Gigabyte, ASUS, Biostar, MSI, ECS. What the Non-Z OC feature specifically does is allow users with a K-Series Haswell processor to overclock their chip on a H87 and B75 chipset motherboard which otherwise isn't possible. All you need to do is grab the latest BIOS firmware from the manufacturers support list and you're ready for overclocking on budgeted motherboards.

However these budget boards still fall a bit short on features compared to the Z87 chipset based lineups from the respective manufacturers. While this is good for consumers, Intel may not seem too happy about it and as per the report by hardware.fr, the chip giant is soon releasing a new firmware update for their B75/H87 chipsets boards which would actively block the Non-Z OC feature from various manufacturers. Now this is not known whether or not is the firmware update mandatory for every Haswell owner or would it be shipped by manufacturers to block the OC feature they released a little over few weeks ago.

"Intel Plans to release a firmware update That limits processor core overclocking to Intel Z87 WW30'13 based platforms." via hardware.fr

It was already seen how Non-K series Haswell chips offer no overclocking at all and the Non-Z OC feature was a good addon by motherboard makers but i guess Intel still has a tight leash on them to get things done their way.