Intel would be unveiling their Bay Trail Atom Z3000 series at IDF13 starting next week showcasing the new SOC lineup that would be powering the next generation tablet devices. We recently detailed the entire architectural aspects of the Atom Z3000 chips and also detailed the flagship Z3770 SOC. 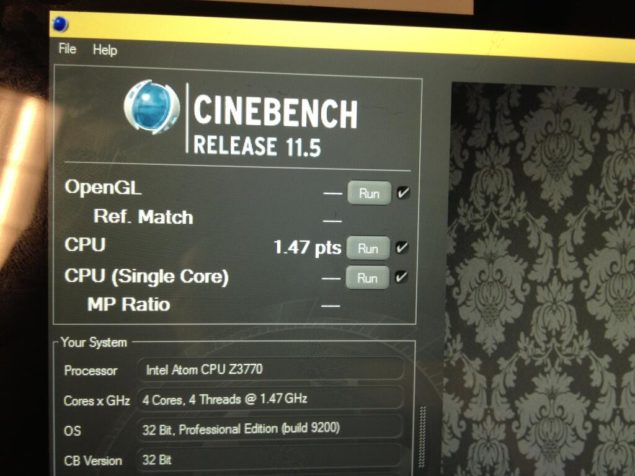 Today, we have an update regarding the performance of Intel's next generation Z3770 SOC based on the latest Silvermont core architecture that is built upon a 22nm process featuring improve power efficiency. According to the results displayed by Intel's Principal Engineer / Performance Architect 'Francois Piednoel', it looks like the next iteration of tablets from Intel would pack a mean punch against their competitors.

The chip was tested in CineBench R11.5 which is a common benchmark tool to evaluate CPU performance. Intel's Atom Z3770 which was clocked at a surprisingly low speed of 1.47 GHz scored 1.47 Points. Compared to the AMD Jaguar based A4-5000 APU, the score is almost on par. Compared to Intel's last generation Clover Trail Atom SOCs At just 7.5W, this is amazing for a mobility processor since the A4-5000 has a TDP of 15W.

The Atom Z3000 Series ‘Bay Trail’ SOCs would be officially launched on 11th September at IDF13 San Francisco. Moving into the future, Intel would release Cherry Trail powered by the Broadwell GPU architecture which means that in a year’s time, we would get around 50-70% performance improvement over Intel’s current Bay trail HD graphics while CPU side would be powered by the 14nm Airmont cores on both Cherry Trail and its successor Willow Trail. More details regarding next generation Atom chips can be found here.