Inner Chains Is An FPS/Horror Set in a Surreal, Dark & Deadly Biomechanical World 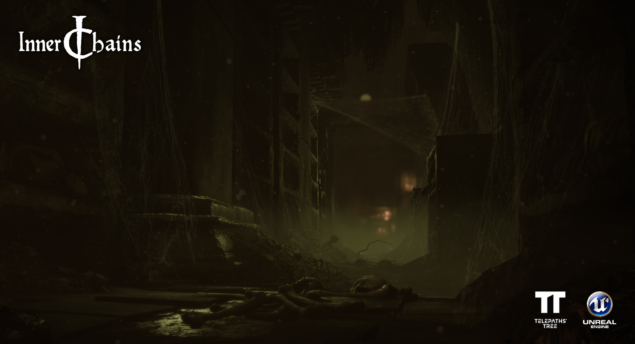 Some of the older readers among you may recall the Heretic/Hexen franchise, developed by Raven Software. Those were among the first successful dark fantasy first person shooters (FPS), a subgenre that did not spawn as many works as one could have hoped.

Inner Chains certainly follows in those footsteps. Developed with Unreal Engine 4 by Polish studio Telepaths' Tree, it is set on a distant planet which hosts a very hostile and peculiar environment.

A rock floating in space, no longer resembling what it had once been. Without human interference, nature has begun to adapt to the new conditions, reclaiming what was once taken by humans. In its everlasting pursuit of perfection, it has begun to assimilate with the abandoned technology, giving life to biomechanical beings.

Left to its own devices, man-made technology has also changed as it tried to adapt to the new environment. Evolution cannot be stopped, so a strong symbiosis soon developed between technology and nature, making it difficult to determine what is alive and what is mechanical in the world of Inner Chains.

The game, currently trying to achieve some of the planned stretch goals on Kickstarter, will debut on Steam in the second quarter of 2016. PlayStation 4 and Xbox One ports are on the roadmap, too, though they will happen after the full release on PC; Inner Chains also features VR support, just in case you want to increase the immersion factor.

We talked about all this and more with Tomasz Strzałkowski, Creative / Art Director and Co-Founder of Telepaths' Tree. Enjoy our exclusive interview!