A Most Impressive Star Wars Battlefront Bundle Appears on Amazon, Get a Lightsaber with your Order

While scouring through Amazon looking for the best deals that are available for those in Europe, I came across a most interesting Star Wars Battlefront bundle that seems to be available only in Europe. The physical PS4 version of Star Wars Battlefront can come bundled with a ForceFX replica of either Darth Vader's Luke Skywalker's (ANH/ESB) or Yoda's lightsaber. All for a cool €239,99. 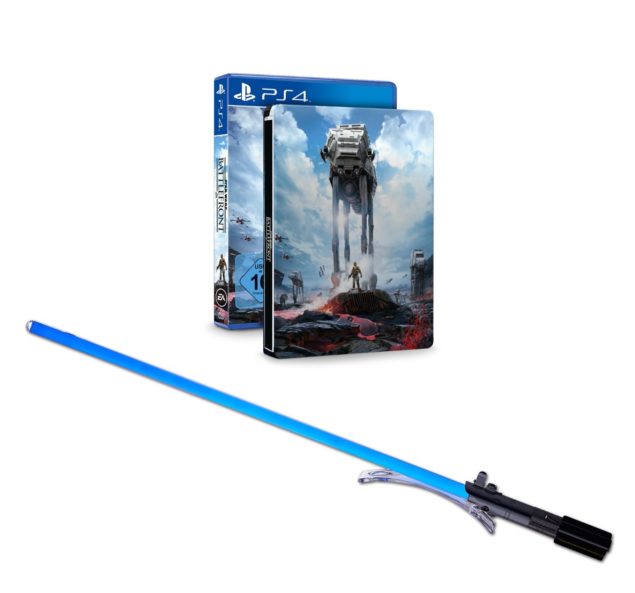 Fancy a lightsaber with your Battlefront? PS4 only bundle in Europe.

The peculiar thing is that this is only for the PS4 version, and doesn't seem to be applicable for the Xbox One or the PC. And while this is the inclusion of a gimmick, it's a different sort of gimmick that has a collectible place in many peoples hearts that's more valuable than a simple metal case, poster or some other items. Also it's a lightsaber, and really, it can be used as a bokken if you're really feeling like getting into the Star Wars spirit.

The ForceFX lightsabers authorized, light-up and are tough enough to actually withstand blows should you feel like filming your own Star Wars fan film, or parody like the one found below. But would the promise of a lightsaber be enough to entice you to buy such a bundle? The price is indeed steep, though the included item is in itself somewhat expensive.