Apple's annual product release cycles come with their own ritualistic song and dance. Whenever the fruit company is close to announcing a new device, he hear a plethora of rumors from a wide variety of sources. Furthermore images of allegedly leaked parts surface every other week. One does not know what or who to believe unless and until Apple officially makes the announcement.

Apple is about to launch the next generation iPhone in approximately one month, which means that the aforementioned song and dance has already been well under way. Even today, images of what are thought to be leaked new iPhone parts have surfaced online and they do tell quite a story. 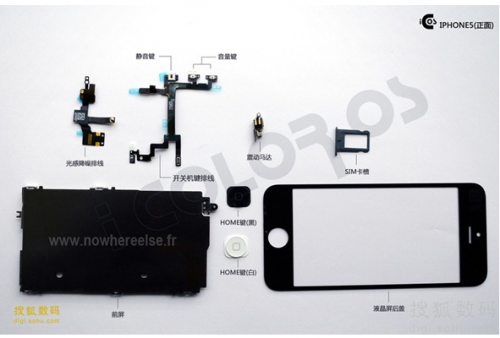 The leaked parts displayed in these pictures are supposed to form the face, so to speak, of the next generation iPhone. These parts include the front panel, black and white Home buttons, nano SIM tray, circuitry and a mysterious piece of, never before seen, what seems to be a metal plate.

From the looks of it the front panel tells a story we all want to hear. It seems to be large enough to accommodate the larger display we have been expecting on the next generation iPhone. Nano SIM try also confirms a previous rumor that the upcoming iPhone will support nano SIMs. The function of this mysterious black plate, thought to be of metal, is still unknown. Though it is likely that this plate will be used for protecting the innards of this device as well as providing overall structural integrity.

The legitimacy of the source which first published these images can obviously be questioned. For all we know, these components may never materialize on the next generation iPhone. Though almost all the components we see here solidify most of the rumors we have heard up till now. The announcement of this upcoming iPhone is expected next month and only then will we have final answers.