iCleaner increases your iDevice’s space by cleaning up useless data

Being an owner of an iPad, iPod Touch or an iPhone, one must know how fast the memory gets gobbled up. And with no expandable memory cards for these devices, you probably end up deleting your important data(and frustrated on your choice).

A large amount of space is often consumed by Safari cache files, history and cookies and for the jailbroken devices, half-downloaded Cydia packages and apps and games. Deleting them, not only recovers your lost memory but also gives you more space for some awesome HD games. However, not everyone knows which files to delete and which not to and even those who know how too. It is still a tiresome process and can not be done without wasting precious time of our busy schedules.

Recently, a Cydia tweak was revealed by the name 'iCleaner' to adress this issue. It gives two options to clean your iPad, iPhone or iPod Touch: By simply pressing its icon on the springboard or by opening the app through the terminal. It so recommended that inexperienced users should use the icon on the home screen rather than accessing it through the terminal to avoid messing something up; although the second of the two gives more informations, functions and settings as mentioned briefly on the main screen of 'iCleaner'. 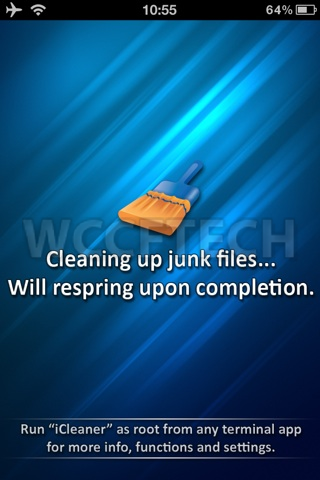 The UI of 'iCleaner' (if launched through the home screen) is simple and easy to use for beginners. A striped blue image with the tweak's logo and some text adorn the background. As it is opened, some dialogs show up with a 'Yes' or 'No' option referring to whether you want the cache files cleaned or not etc. After giving your respective response, a final dialog box appears revealing how much space was cleaned and if you want to respring now.

The tweak is currently free in the BigBoss repository and supports up to iOS 5.0.1.