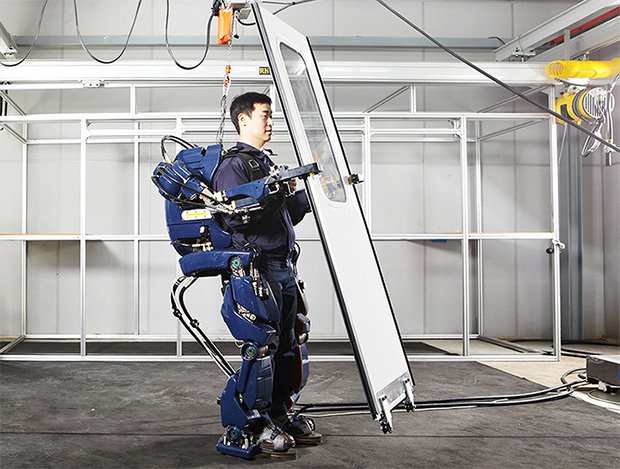 Exoskeletons are not going to be limited to Call of Duty: Advanced Warfare because Hyundai is already working on something that will make you feel like you’re inside a Hulk Buster armor.

Digging deep into electronics, Hyundai has showcased a wearable robot suit that will make you feel like Tony Stark. The Exoskeleton was possible thanks to the joint effort of companies like Hyundai Motor Group, Hyundai Rotem and Kia Motors. We believe that the Exoskeleton could be used to aid factory workers in completing tasks that involve a severe amount of lifting, but it is possible that the venture also opens up new possibilities, such as branching out to military applications.

However, as you can see in the image, the robotic armor is far too large to be used in warfare, but we are sure that a miniaturized version will be released in the foreseeable future in order to aid soldiers to gain the upper hand in combat related situations. As you have widely seen in video games and television shows, putting on an exoskeleton greatly augments the strength of the wearer, allowing him or her to lift far more than their body’s recommended limits.

Not only this, but such machines can also be used as a type of prosthetic to aid wearers to gain the ability to walk again. According to the company, the exoskeleton can used in a variety of different applications:

“This wearable robot that we are developing for commercial purposes will be used in diverse areas. Such a robot development is in line with Hyundai Motor Group's vision for free mobility of people and things.”

Hyundai has not pointed the cost incurred to produce such a machine, but you can rest assured that it will be out of reach for the average factory worker, unless of course the company introduces an effective monthly-payment scheme for daily wage workers to pay off the cost with relative ease.