Sometimes, and it seems it becomes more often than not at some times, the hype generated before a game is released, whether that’s fan or publisher generated, can absolutely ruin a game. The mystique is shattered and every facet of the game is analyzed and scrutinized to the point of absurdity.

The Grand Finale of Geralt in The Witcher 3: Wild Hunt

And that hype is precisely the issue that plagues The Witcher 3: Wild Hunt. It ruins it and destroys the sanctity of what could possibly be a fantastic game. That is, if you only look at the graphical fidelity. And quite frankly, those graphics hardly matter in a game that has a story of this magnitude.

The world has changed drastically since we last saw our friend Geralt. Conflict between the Nilfgaard and the kingdoms of the north has left the world devastated and in turmoil. The Wild Hunt is far more dangerous, however, than the petty worries of man.

The opening cinematic is nothing short of stunning. The transition between battle and Geralt is a work of art. That and the violence depicted is animalistic, and perhaps not for the weary. No, no animals were harmed in the making of that scene.And that is but a small prelude to what’s to come. The story is just that massive, and the way in which it’s told is very stimulating and engaging. Most importantly, and this is something that a lot of open-world games seem to fall short with, is that your actions really seem to matter. They have a weight behind them due to how the other aspects are affected that is substantial enough to really enjoy it. It’s satisfying.

The main story itself seems to have a coherency that it maintains throughout the majority, transitioning slowly and (mostly) smoothly from the vast open world into a more controlled and directed environment that introduces us to the inevitable endpoint. And the finale? It’s good, quite good indeed. Though the battles leading up to the grand exit are a bit pedantic, the actual storytelling imparts a sense of finality that is, once again, difficult for large open-world type games.

If you enjoy RPG’s for the story and character development, then that’s obviously covered, but if you also play them because of the massive amounts of other stuff you can do in-game, then you will not be disappointed. It’s difficult to not get lost in the bustling living world around you. Not only is it majestic in its beauty, but the sheer number of side quests and different tasks you can perform not directly relating to the main story is almost overwhelming. Step outside of yourself and see that the world has its own problems that aren’t connected to you, and then realize that you can help.

Sometimes, though, secondary quests are harmoniously connected, a simple dialogue choice sets you after another objective. Though mostly what Geralt says, is a natural segue. It works, and it works well.

And the graphics are nothing short of spectacular, as we already know. That has already been discussed to great length, and I can report that with everything turned on Ultra (and High in the postprocessing tab), it runs well. The framerate doesn’t remain a constant 60FPS even with dual Titan X’s at 1440P. It suffers some slowdowns, but it’s easy to see why. The way in which the world was modeled is incredible. Even how Geralt rides his horse is realistic, and smooth. The Witcher 3: Wild Hunt clearly requires some good hardware to enjoy it at its highest settings. 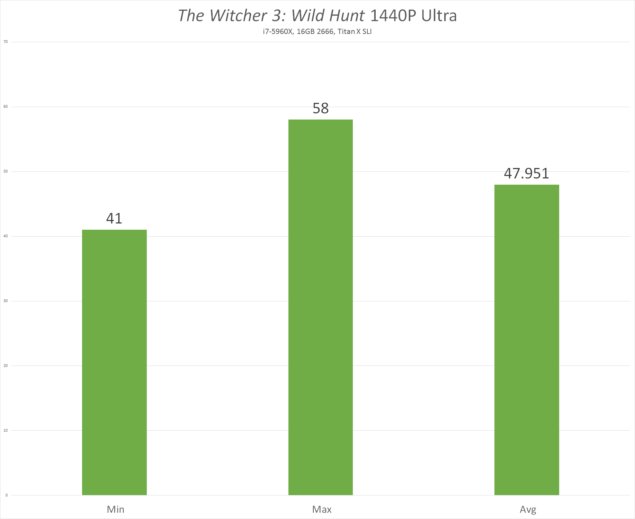 Combat is surprisingly satisfying, so much so that it needs a small section of its own here. It can be challenging, but in a good way. Instead of the half-hearted clicking of buttons to try to kill the enemy, if you pay attention you can time your movements to make for some spectacular combat sequences.

There are always negatives…

Yes, even for such a spectacularly amazing game, there are some negatives to be mindful of. Nothing can truly be perfect, now can it?

As soon as you start you’re immediately bombarded with in-universe jargon. In literature that’s usually a sign of poor writing and poor literary techniques. It’s annoying and can alienate a lot of potential audiences. A lot of good science fiction and fantasy suffer from this, but fortunately if the franchise is known to a large enough fan base, then it has the ability to succeed despite that. It’s still off-putting though, very much so.

And of course the hype. The hype that broke the games back. The general attitude towards a game before hand is affected greatly by how the media portrays the various leaked elements of a game, including the story. It can make or break a game by helping create pre-conceived notions about what a particular game is or isn’t. Even if the final product happens to be marvelous. The Witcher 3: Wild Hunt suffers from concentrated hype syndrome. It’s great, but getting into it took a lot longer than I thought it would. It took a long time to get into it, regardless of how open and fantastic the game actually is. The hype didn’t exactly kill the game, per se, but it delayed the enjoyment.

The Witcher 3 is quite possibly one of the most fascinating video games of this decade, and perhaps even of the next. And it's not due to the graphical fidelity, which certainly raises the bar, but instead for how it presents to us a magnificent story held within. It was such that it truly engages us in a way that is perhaps distinct and very rare. I think that The Witcher 3: Wild Hunt will become a benchmark for how stories are are told. The significance of which, might not be immediately apparent, but The Witcher 3 is a very significant video game that will continue to influence the gaming industry far beyond its initial release. This game, without a doubt, is recommended.  Even if you don't like RPG's this will wow and amaze you.