CW - I always have to ask an awkward question [laughs]. So with you moving between cultures, do you have aspects of the cultures? So if you're the Egyptians, you'll have certain rules, you'll want to build and expand certain ways, then moving into another culture. I imagine you'll have some disparity between different cultural types?

JS - Sure. Part of it is we want to get that purely abstract gameplay mechanic, possibility for the player to say "Gosh, I need to be more military now. So I will choose x". You want to let the player be able to do that. What happens when you choose your new culture is that it's not a delete-replace sort of thing. You keep the traits and you keep the buildings you've built into the cities. You're adding a new type of quarter a new type of emblematic building. It's additive, it's not something that replaces the past.

If you look at a city like Paris. There are Roman ruins, there are ruins from the Gallic tribes. There's this whole architectural history from the 17th, 18th, 19th and the 20th centuries. Realistically cities are that, this confused map of everything they've been beforehand. Me, as a creator of games, I want to see that. I want to be able to show that to the player, I want them to look at the city, this great megalopolis and say "Yeah, that's where I was and that's what I did". If it's just like, boom, your city is Roman now, you lose that anchor with the past, you lose that sense of having chosen different cultures for a reason.

So yeah, it's all of this. I mean, there's a lot of different ideas coming into that.

CW - So this might be a little out of your wheelhouse. You mention the whole megalopolis side of things. So, what I was shown seems to say the cities can get like insanely huge. I don't know if that'll mean they look too big, in that case, you'd only have so many so much space for cities on a map in that situation.

JS - I think that was done for demo purposes. It's possible in gameplay, but not reflective of all gameplay. I think it was also sort of a mid-sized map and you can do large and very large maps. So it'd look the same but there'd be more hexagons, right. So your city won't be quite as... megalopolithic? [laughs]. Which is clearly not the word. But anyway.

JS - Yeah. Quick - bring me a thesaurus! [laughs] So yeah, that's true. So you're looking at the demo it's like you have a city that goes almost from the Baltic to the Mediterranean? CW - Yeah, that was it. I was just thinking you've essentially covered the whole Balkans with one city. I understand for demo purposes it's to show the growth of the city from one culture to the next, showing it as a melting pot.

JS - Exactly. From this nomadic tribe to this huge thing. But you like all 4X Games, you can also build tall more than wide. So you have some options and you see the scope of what is possible. I like it because you really are seeing the mark that you left, seeing very visual, very evocative feedback of what you've done in your strategy and where you've been with your culture.

CW - Certainly. The actual design of everything, it's a beautiful looking game.

CW - It really is. Was that a conscious decision? You've got such a variety in terrain, the height map, terrains types and even the melding of types. One of the first things I noticed was actually a rocky forest. That's something you don't really see in other games. Of course, you get forests on rocky terrain, so I suppose I'm asking how much variety has been put into the game and terrain.

JS - There's a fair amount of variety. I mean, as far as the different elevations, and as far as the terrain types of each elevation. I couldn't tell you how many different terrain tile types there are. I think it's one of the differentiators. As you said, people are going to compare us to Civilization.

The type of terrain, the 3d terrain and the importance of it is something I think is really different. It's going to lead to tactical battles, the elevation, the positioning of armies, their movement and to the settlements themselves. The map is almost like another player. It's almost like something that you have to take into account every time you're moving, settling and doing anything like that. It's a living thing. 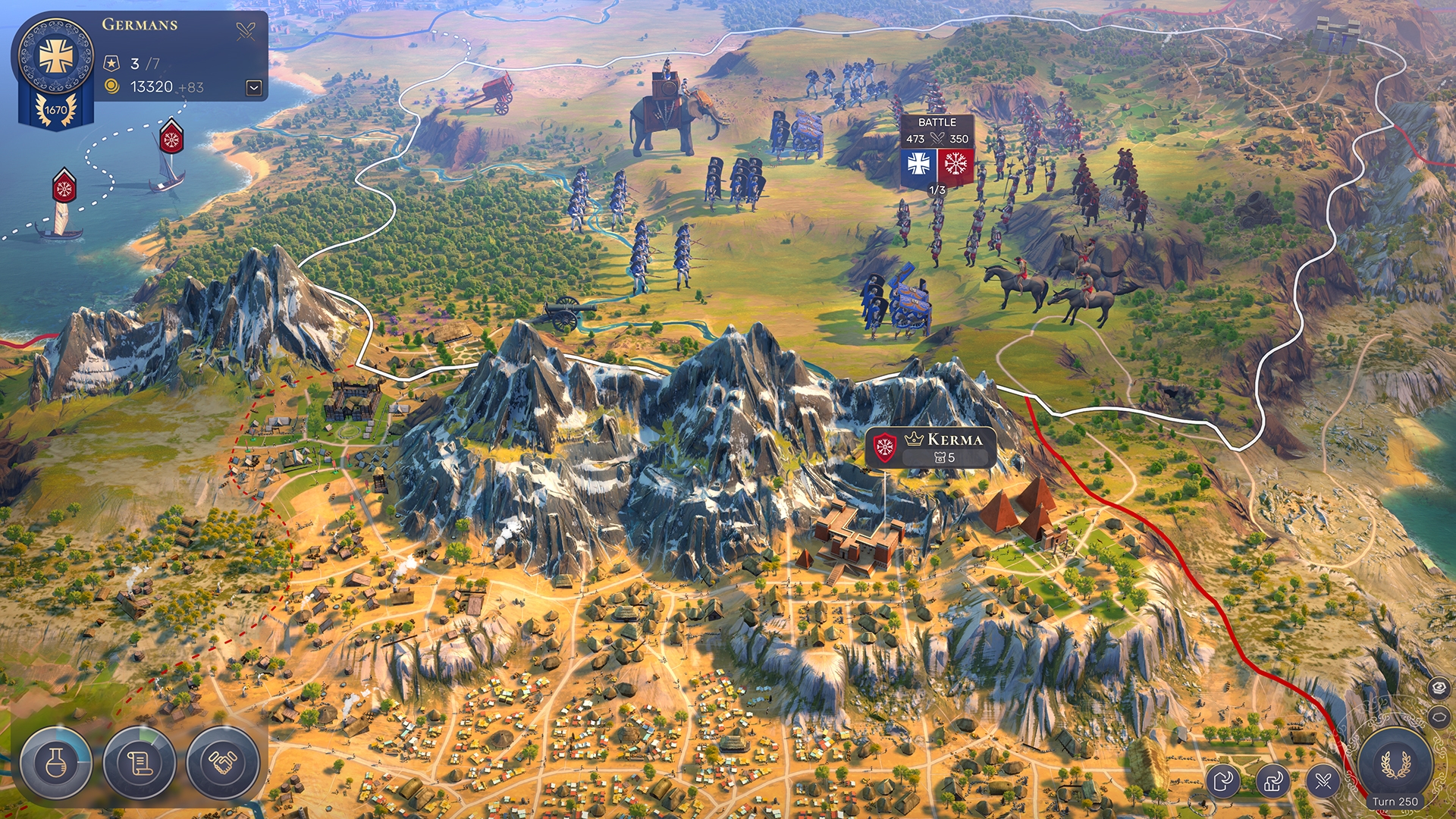 CW - Terrain can tell a story in itself. The expansion from a hill to a river, or from a river expanding outwards. That's how civilization started, looking at the ancient Mesopotamians. Is that the sort of things you're going for?

JS - Exactly. Yeah. If you start with like, the Euphrates and the Fertile Crescent. Yeah, you know exactly, exactly that.

CW - So, the question I do have is how did you choose the cultures you wanted in the game? You have 60, but, well, there's so many to choose from so why.

CW - [laughs] Well, there are limitations. It's more, how did you go about selecting 60 out of what could be a pool of thousands?

JS - Well, we hired a historian and we work with others. We have a guy who's like full-time Amplitudian now. They've helped us to go through period by period, essentially "Here are your options. Here are the cultures who, at that time, were really doing amazing things and making a mark on history". Whether or not they were militarily powerful, and conquered a whole lot. We tried not to use that as a metric but things like political influence, religious power, economics, that sort of thing.

We tried to find 60 examples over the course of human history that really exemplify cultures that really left their mark was really particularly important or powerful in that particular era. That's tough. One thing is that we'll certainly be releasing more cultures after the release date. We hope people will be modding them in as well. There'll be modding tools. If a culture is missing, or you don't like the bonus, fix it or add something, we're very open to that.

CW - Another thing, linking into your other titles is, will there be a space race in the game? At least to an extent - It's got to be asked!

JS - [laughs] Basically, we're bringing you up to the modern-day, maybe a hair beyond. Let's say maybe 2020, 2030, something like that. We're not going to take that next leap to the stars.

CW - Not so much as colonising the stars, but will you have the technology and possibly your civilization gains fame from launching into stars. Such as a first man on the moon - a Neil Armstrong of sorts.

JS - Right, yeah. It is something you can do, an element, but we're not looking for the next Elon Musk, who's going to settle Mars or something. We're not taking it to that to that next step. But yeah, we want it to be... I mean, realistic has is a very stretchable word and video game. We want each historic element to be very accurate and very realistic. Then the player gets to combine those into the history of the story they want to tell. CW - So, I've actually got a very important question. I want a pet woolly mammoth, but I'm guessing you can't get one sadly. But is it possible to preserve things from history? So, for example, don't allow certain animals like the woolly mammoth go extinct. Can you keep some features throughout history?

JS - I can't give you hope in there. There is a very legitimate question about things like climate change and deforestation and where that goes. I can't say right now when and how that's going to be implemented. But clearly, it's something we're going to look at. Your city centre, buildings and all that is preserved though.

CW - So you're thinking of climate change, rising sea levels and such as that?

JS - Yeah, right. There's a lot of things that, you know, as responsible 21st-century developers were looking at. We're figuring out how to put them in the game and what the mechanics will be. You know, we can't say more about it now. But yeah. It's all stuff that's important to us.

CW - Excellent. Thank you very much.

JS - It's my pleasure. I can talk for hours about this stuff.

CW - To be fair, so could I. I don't think they'll let us though! Thank you very much for your time.