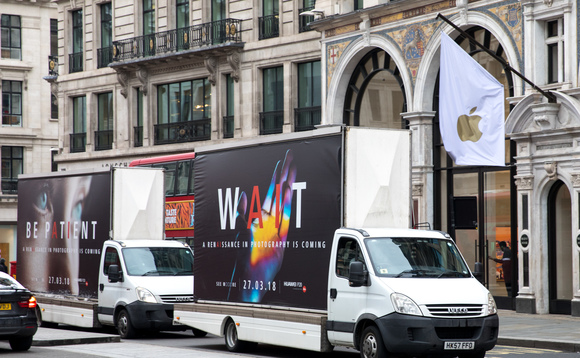 Huawei is the world's third-largest smartphone maker in the world after Apple and Samsung. It seems the company has taken its flagship smartphone, the P20's marketing strides to the next level. The company has parked ad vans in front of Apple and Samsung Stores in the United Kingdom. The ads on vans read "Wait" and "Be Patient". The AI alphabets in 'Wait' are highlighted in a different color. Possibly, it is suggesting the technology that its upcoming devices will be running on. So let's dive in to see some more details on the campaign and what other techniques is the company focusing on in its Huawei P20 marketing ahead of launch.

Apart from the ad vans parked in front of Apple and Samsung stores, Huawei has also sprayed graffiti in front of the stores. It reads "The Renaissance is coming" on March 27. The graffiti mentions the P20 in a hashtag and fortunately, March 27 is only a few days from now. There have been several leaks and rumors surrounding the P20 and what we know at this stage is that the flagship has emphasized greatly on camera.

The camera improvements in the P20 will rival Apple and Samsung. It's a fact the iPhone X and Samsung's latest Galaxy S9 duo packs a killer camera. Huawei seems to be taking a direct hit. It's not clear at this stage if the marketing strategy to park ad vans in front of Apple and Samsung stores will work or not, but it has gauged user interest on social media. 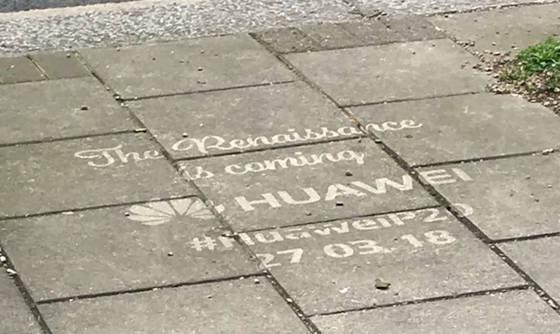 The Huawei P20 will be showcased to the world on Tuesday, March 27 and the company is also expected to launch the P20 Pro. There will be subtle differences between the standard P20 and the Pro version of the flagship. The availability of Huawei P20 on the American soil is a different question altogether. Previously, BestBuy announced it would not be selling Huawei smartphones in the United States.

There will be more to the story, so be sure to stay tuned in for more details. What do you think about Huawei's marketing techniques in the UK? Do you think it will manage to gather enough attraction? Share your views with us in the comments.