With 2014 coming to an end, we're getting to see more and more leaks about the flagships of next year. After we received some rather interesting images of the Samsung Galaxy S6 today, its time for HTC's successor to the One M8, being dubbed as the HTC Hima to appear in the spotlight. HTC is rumored to change the name for its next flagship next year, with the next HTC flagship being dubbed HTC Hima by the manufacturer. The HTC Hima is also expected to get a 5.5 inch screen with a 16 MP rear camera. 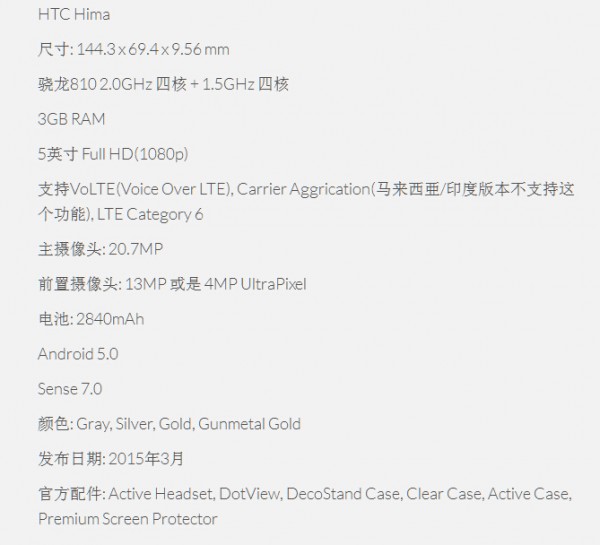 HTC Hima Specifications Leak - Device To Come With 2.0 GHz Snapdragon 810 And Sense 7 On Board.

Leaker upleaks is back today with a detailed specifications list of HTC's upcoming Hima next January. And he seems to have some really good specifications in store for us this time. According to upleaks, the HTC Hima will be coming with Qualcomm's latest upcoming Snapdragon 810 SoC and 3 GB of RAM. A China specific version of the device will be coming with a MediaTek SoC on board. Rear camera for the device will come with 20.7 MP resolution and will undoubtedly feature Sony's latest Exmor camera sensor.

The device will also be coming with four color variations that are Gray, Silver, Gold and an all new Gunmetal Gold. LTE Cat. 6 also seems to have made it on board the HTC Hima, with the device having dimensions of 144.3 x 69.4 x 9.56 mm. Android Lollipop will also make it on board the HTC Hima. An interesting specification leaked however is the presence of an all new HTC Sense UI on the HTC Hima. Allegedly, the device will come running an all new HTC Sense 7, something that has been rumored for quite a while now. According to upleaks, HTC is also going to provide Sense 7's source code to its partners soon. Thats all that we have on the HTC Hima so far. Let us know what you think in the comments section.