Today marks Horizon Zero Dawn’s second birthday, and Aloy has a lot to celebrate! According to Guerrilla Games, the open-world adventure has sold over 10 million copies, a pretty astounding number considering Horizon Zero Dawn is a new IP and only available on one platform. Guerrilla managing director Hermen Hulst shares a handful of interesting stories about the game’s development here.

Sadly, no new content is coming to Horizon Zero Dawn itself on its second birthday, but another game is getting some HZD goodies. PlayerUnknown’s Battlegrounds, which finally came out on PS4 this past December, is getting a collection of Horizon Zero Dawn cosmetics. Specifically, a top, mask, and gun that will let you cosplay as a member of the Eclipse cult. Oh, and there’s also a nice, shiny HZD frying pan, just because. Check out all the goodies, below. 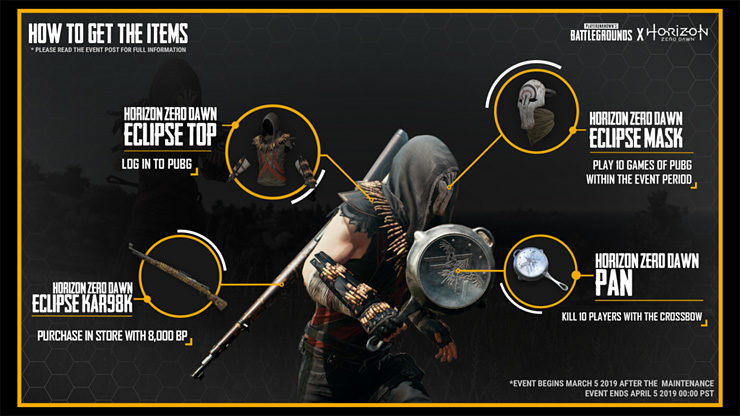 Guerrilla Games art director Roy Postma had this to say about the PUBG team-up:

“When we first spoke with the development team of PlayerUnknown’s Battlegrounds about adding Horizon Zero Dawn themed items, we instantly thought of the Eclipse. This secretive and militaristic cult fits perfectly in the PUBG universe; its members dress in intimidating ceremonial garb, intended to strike fear into the hearts of all who dare oppose them. Their warlike nature is displayed by their use of ejected bullet casings from ancient war machines, which they work into rosaries and other ornamental motifs, as well as their masks, which they use to hide their identities.”

You can grab the Horizon Zero Dawn cosmetics from March 5 until April 5. Here’s how you earn them: