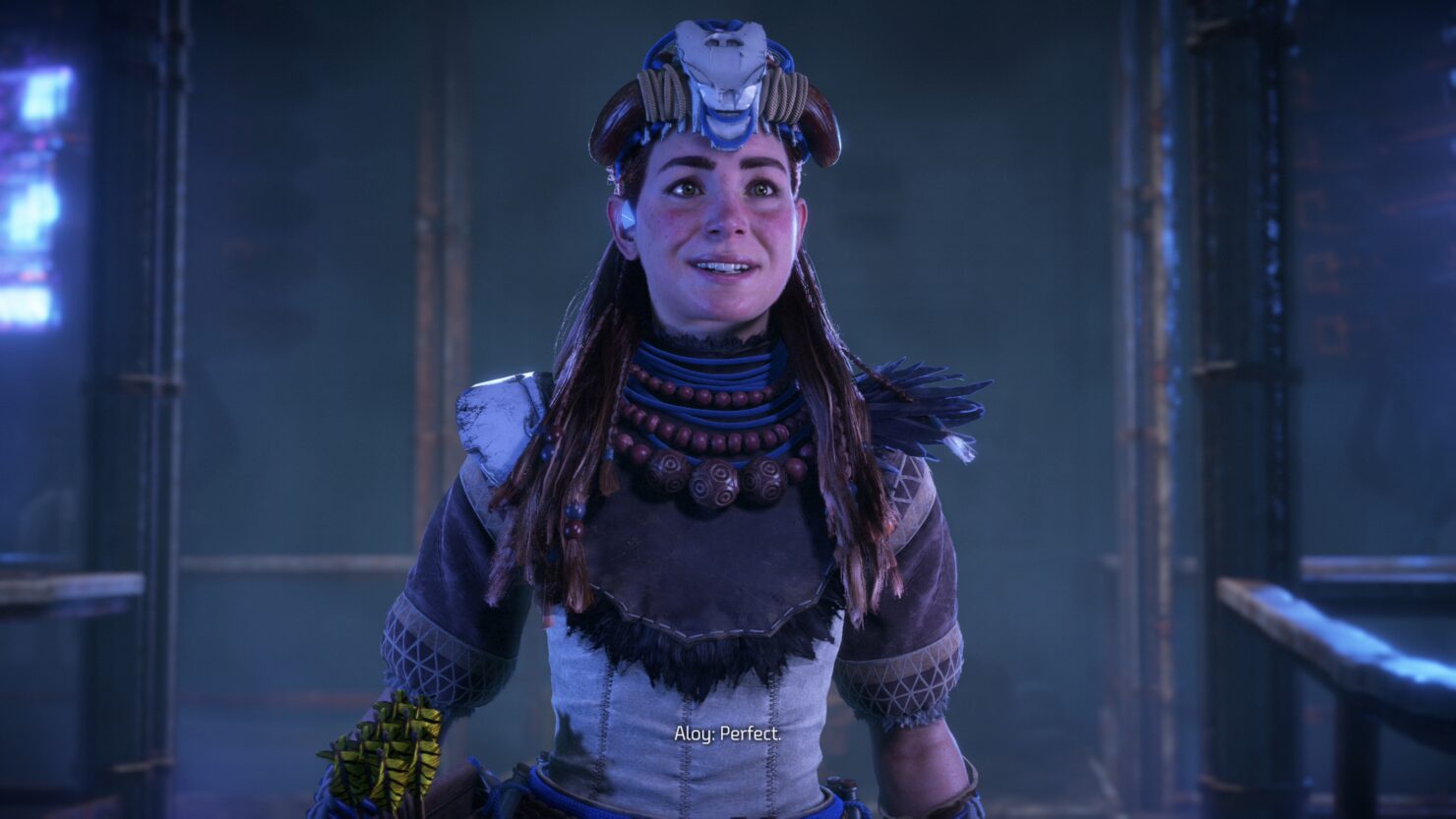 Improving Aloy's potential in Horizon Forbidden West comes primarily from investing skill points to unlock passive and active abilities. With six skill trees at your disposal from the very beginning, we wanted to highlight ten skills that you can pick up before you've finished your first salvage contract in the Forbidden West. You'll have to invest some extra skill points to work down the trees long enough to unlock these, but we can guarantee that they'll be worth your while.

The very first skill in Aloy's Warrior tree also happens to be one that players will frequently use as they engage in melee combat. Resonator Blast first builds up energy on Aloy's spear. Afterward, hitting enemies with a Power Attack (R2) will leave a massive glowing orb on the enemy target. Shooting that energy blast with Aloy's bow causes a massive blast, dealing a substantial amount of both damage and tear to the enemy target. Future skill upgrades can increase how fast this energy builds up and the amount of damage it deals.

Ordinarily, I wouldn't recommend investing points in the Trapper tree until you have enough materials to keep building traps and other combat tools on a regular basis. However, Nimble Crafter applies to more than just tools and traps. When Aloy needs to create herself a health potion after taking some damage, shaving down those precious moments can save her from an early defeat. At the second level, Nimble Crafter can reduce the crafting time by 40%. 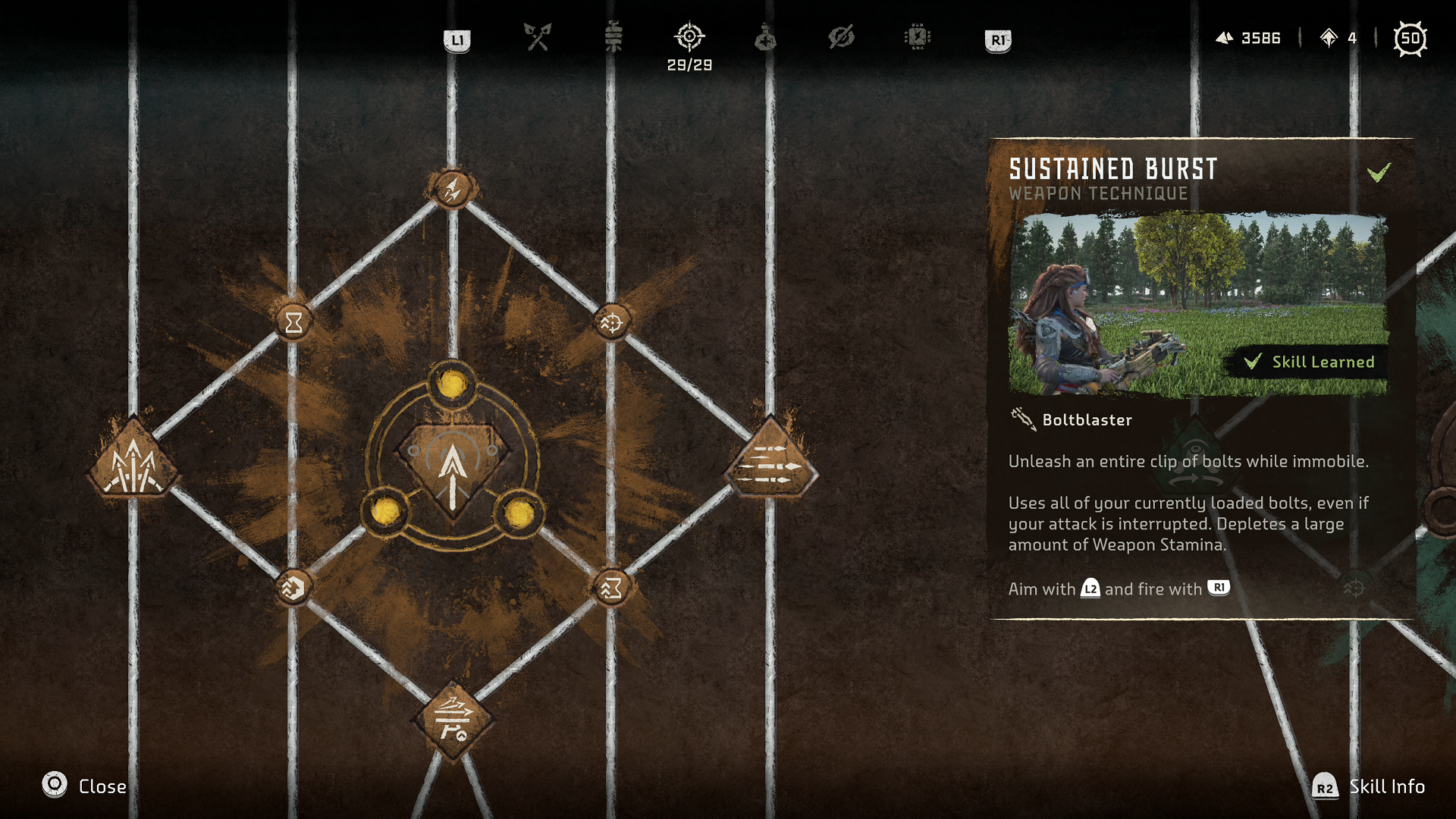 In Horizon Forbidden West, the upside-down diamond shape kills on each of the six skill trees represent Weapon Techniques, special abilities for Aloy's ranged weapons used by pressing R1 while aiming. While Aloy can pick up up to three Weapon Techniques for each class of weapon, you're going to want to decide early on what your primary weapon will be. There's nothing wrong with sticking to Aloy's Hunter Bow and going down the Hunter tree to unlock Triple Notch, allowing Aloy to load up to three arrows and once and fire them all at once at her target. Once you start experimenting with elemental arrows and dealing status effects to enemy machines, overloading the machines with Shock or Frost all at once can be quite effective in battle. Similarly, the Quick Wire for the Tripcaster can instantly put down a Tripwire if you have an enemy machine charging directly at you.

The Hunter skill tree is where Aloy will pick up most of her ranged passive abilities, and given just how much time the player will spend drawing a bow, wouldn't it make sense to have more ammo? Ammo Expert is in the second half of the Hunter tree, so you'll have to invest in a minimum of six other skills to reach it. The reward? Being able to craft more ammunition from the same amount of resources.

Valor is the energy resource used to power Valor Surges (Aloy's ultimate attacks in Horizon Forbidden West) that takes some time to build up. Why not decrease that time if you accidentally take damage? Each time Aloy is struck in combat, she can gain up to +5 Valor at max level and quickly turn the tide of battle if you aren't afraid to take some damage and healing up.

This requires a single point invested in the Infiltration tree to unlock Silent Strike+ first (which boosts damages when sneaking up on enemies for a melee attack). Stealth Tear+ boosts the amount of Tear damage that Aloy dishes out when attacking from stealth. Unless you're jumping in from the heavens or sailing in on a Shieldwing on every encounter, you'll get a lot of mileage out of this skill. Taking out crucial machine components early on can take out an enemy weapon or even open up a bigger weak spot. Similarly, Stealth Ranged+ gives you a flat damage increase on that first arrow shot out of stealth.

This is the first Valor Surge in the Machine Master tree and is part of Aloy's special techniques activated with L1+R1 once a special gauge is filled. While other Valor Surges might provide more direct damage or defensive capabilities, this particular ability is fantastic for tearing machine parts off. Once Aloy unlocks a Sharpshot Bow with Tear Precision Arrows, it isn't uncommon to rip off machine parts with a single shot. At Level 3, this ability adds an extra 85% Tear and Damage to components and weak spots, an additional 50% chance for valuable scrap, and a knockdown effect on the target when removing a component.