HMD Global was one of the first companies (Essential doesn't count) to update their devices with Android Pie after OnePlus. Since then, a lot of their devices are got their slice of the Pie, but at the same time, a lot didn't. Today, the company released a roadmap of their Android Pie update schedule via Twitter.

Revealing our Android Pie update roadmap! We were the fastest in deploying Android Oreo ? 8.0 and 8.1 portfolio wide, with Android Pie ? we are committed to be even faster. You can also take a peek into the kitchen here: https://t.co/NlWbss4q3P #nokiamobile #android #androidone pic.twitter.com/lrJADwJOxO

The Nokia 8 and Nokia 8 Sirocco are in the process of their Android Pie rollout, which should be mostly over save for a few areas. The next devices in line are the Nokia 5.1 and Nokia 3.1 Plus, for which the rollout should start at the end of January. At this point, there is no mention of any open beta that users can participate in, but we'll keep an eye out for it. The Nokia 3.1 Plus is one of the company's newer devices and was released only a few months ago as a successor to the Nokia 3.1. 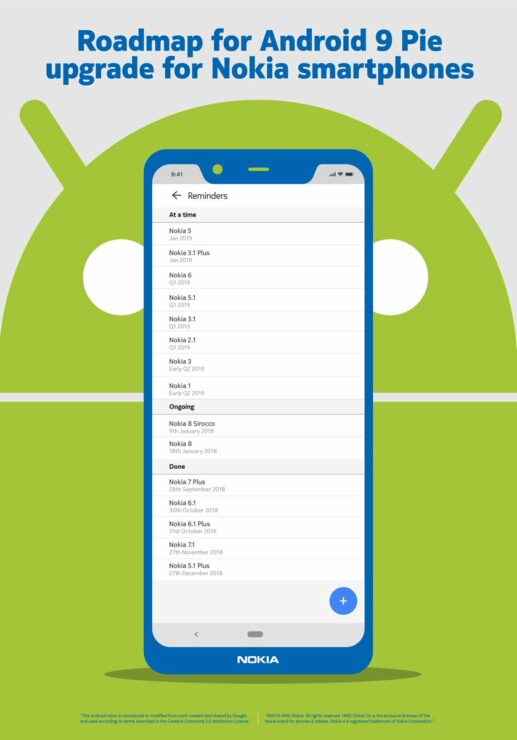 Most of the other entries in the list are HMD Global's budget offerings, which seem to have made quite a splash in the market. Although they're not as impressively specced as some competing devices, the promise of lightning-quick updates coupled with a clean, customisation-free version of Android is enough to lure the Stock Android enthusiasts. Even the near two-year-old Nokia 6 will gets its slice of the Pie alongside the more recent Nokia 5.1, Nokia 3.1, and Nokia 2.1 sometime in Q1 of this year. The Nokia 3 and Nokia 1 will receive the Android Pie update in Q2.

Last year, HMD Global announced that they'd update all of their eligible devices with Android Pie, and the company has kept their word so far. Their Android Pie deployment has been largely hiccup-free, barring the Nokia 8 Sirocco. One would expect a company's flagship offering to receive preferential treatment when it comes to a major software upgrade, but such is life, I suppose.