Gameplay videos from IO Interactive's upcoming Hitman have made their way to the Internet. These videos show off some very early pre-alpha level and gameplay footage, so keep in mind while viewing these that it isn't necessarily representative of the final game in any way. There is a mix of footage we've seen screenshots of and new footage as well.

A couple of things we can note while looking at this is that the controls are almost perfectly lifted from Absolution. That doesn't mean changes won't occur in how to select weapons and in the options available to interact with the environment, however. Also, it's clear that the intent is to provide just as many options for completion as in the older Hitman games. This looks to be a proof of concept to show that some of the mechanics are actually working in-game. So far so good, right?

This is pre-alpha, though, and because of that some pretty funny things happen in the video. Changing weapons and crouching down behind an enemy right in front of them to then kill them is kind of hilarious. Trying to avoid detection by getting behind an oven while the other cook can clearly see your head is also kind of funny. Those small issues will likely be worked out, though. I know that the AI was sometimes very unforgiving in Absolution and Blood Money, not to mention the original Hitman: Codename 47. 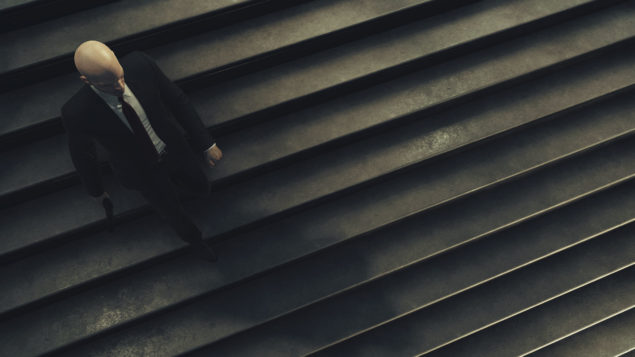 We've recently revealed that IO Interactive is very much committed to bringing a level of distinction with this Hitman, also ensuring that it stays true to the roots from which the franchise was built. The story may not be the focus, but the choice in how to go about missions and need to think abstractly will hopefully remain at the core. They want to avoid the common modern-day development blunders. IO Interactive also told us it'll be episodic in nature, but that all future DLC for Hitman will be free, costing nothing extra.

Hitman is not exclusive to the PS4 and will be released on the Xbox One and PC as well, though there will be quite a few fantastic PS4 exclusive pre-order bonuses that add real value to the game. You’ll get access to a beta test, and six exclusive contracts available only to those that pre-order for the PS4.

Hitman will release on December 8th, 2015. Pre-order for any platform at your favorite retailer for $59.99.