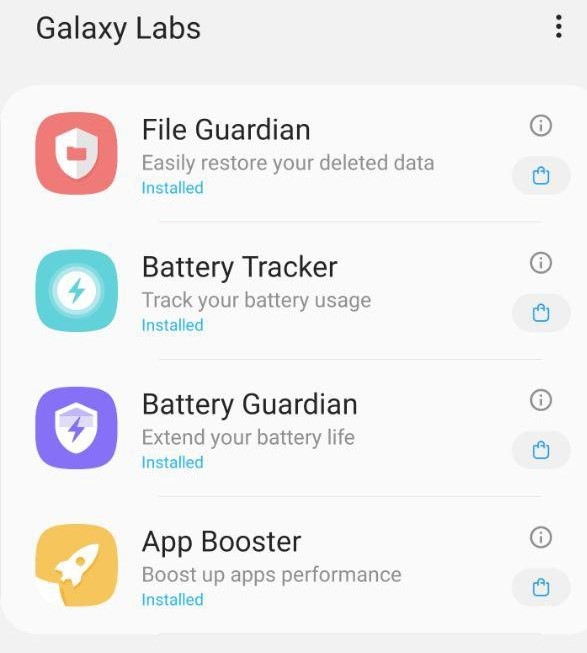 Good Lock was Samsung's first suite of apps that let you tweak your device in a lot of useful ways. At the Samsung Developer Conference this year, Samsung launched some new optimization apps for Galaxy devices under the monicker of Galaxy Labs. It is a container that lets you access the following apps: File Guardian, Battery Tracker, Battery Guardian, and App Booster. Each app has to be downloaded separately and can be launched only from the Galaxy Labs application. Let's take a look at what each app does.

File Guardian lets you restore files permanently deleted from your phone’s internal storage and external storage and is arguably one of the best apps in the Galaxy Labs suite. Recovering deleted files from a PC/Mac is hard enough as one has to rely on third-party software that may or may not work. It is infinitely harder to employ the same techniques for recovering data off a mobile device as Windows doesn't recognize it as a conventional USB drive.

Battery Tracker tracks your phone’s battery usage by giving you a more detailed look at per-app usage. It is a lot better than the on-device battery stats as you can track usage over a greater period. The app lets you track battery usage since the last full charge and also for the entire week.

Battery Guardian is merely an optimization tool, and it works in the background by automatically killing apps that are taking up too many resources. However, it won't play nice with apps that need to run in the background, so its best that you put them in the 'ignore' list.

We're not entirely sure as to what App Booster does. The description states that it optimizes all apps on the device to boost their performance. However, once you click on the Optimize Now button, it'll take at least 15-20 minutes for the process to complete, and I haven't seen any noticeable performance change so far. Perhaps Samsung will tell us more about this one in the future.

How to download and install Galaxy Labs on your device