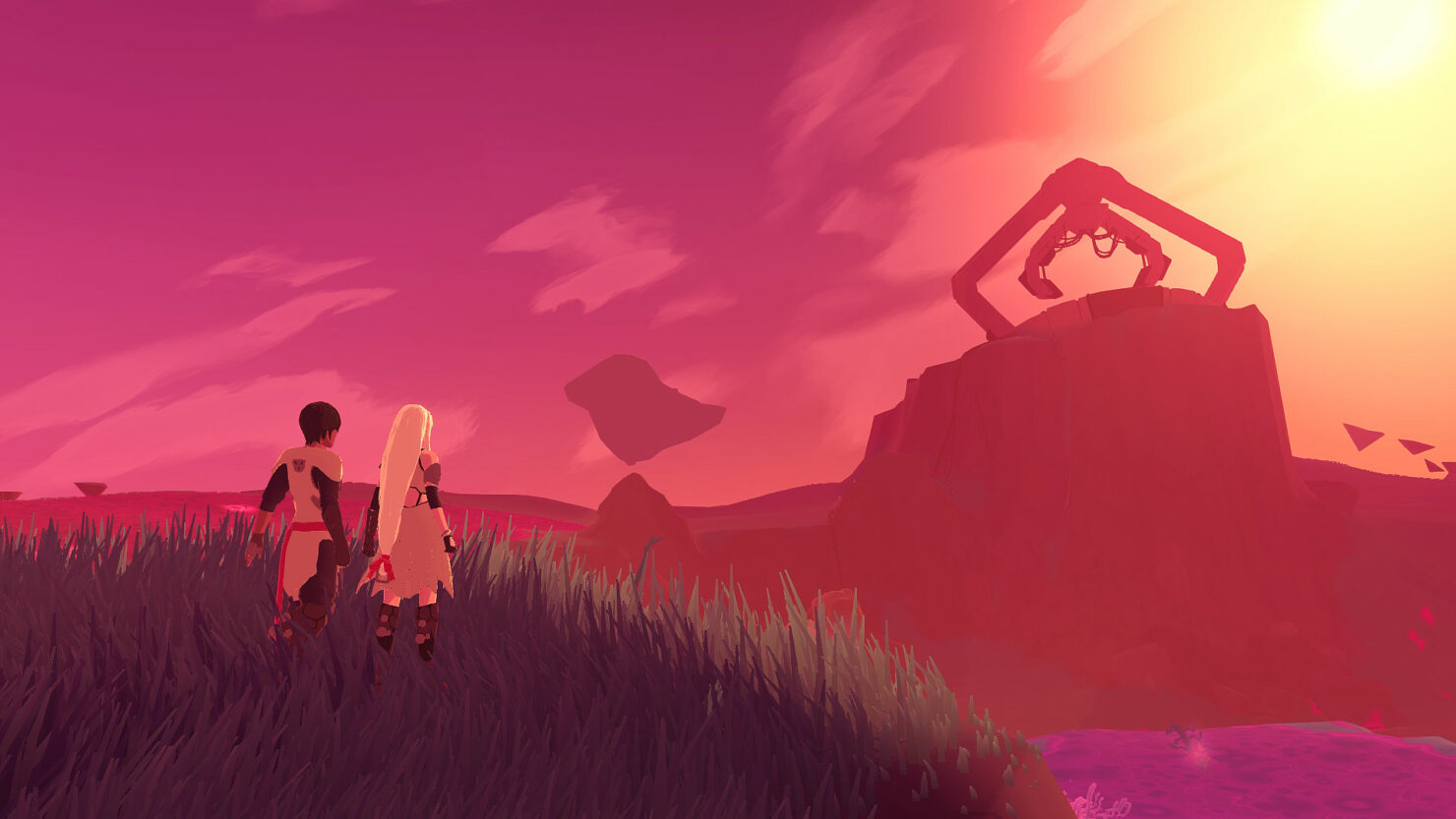 If I am to shed the hyper-masculine façade for a moment and be honest: I really love relationships. Yes, I know, human interaction is slightly gross and disgusting, especially in public, but there's a part of me, deep down, that loves it. Is that sick and wrong? Probably, but that's my cross to bear. So when I found out that the developers of Furi, one of the most electrifying and pulse-pounding indie games from the last few years, were developing a slow-paced RPG about a pair of lovers, my interest was piqued more than I like to admit.

The only thing that Haven shares with Furi is a strong aesthetic style. Other than that? The two are like night and day. Gone is the intensity of Furi's bullet hell action, and in are thoughtful conversations, and typical interactions with a significant other. Yu and Kay are two star crossed lovers that decided being together is more important than anything else in the galaxy, which is why they're all alone on a celestial entity with nothing to eat but weird apples. Every meal consists of these confounded apples, and of course, this causes a little bit of bickering between the two.

What impressed me the most about this Haven demo was that everything felt natural. If you've been in a relationship, you will recognize the motions these conversations go through. Passivity, annoyance, frustration, understanding, affection. All of these emotions are shared between Yu and Kay as the interact, and it feels like a believable relationship, the kind that many AAA games still manage to make feel ham-fisted or awkward. I can believe Yu and Kay are a real couple, in a real relationship, and really care for one another, whether it's because of their pillow talk, or the unbridled affection they show for one another. Oh, and if you haven't been in a relationship: I'm sorry. 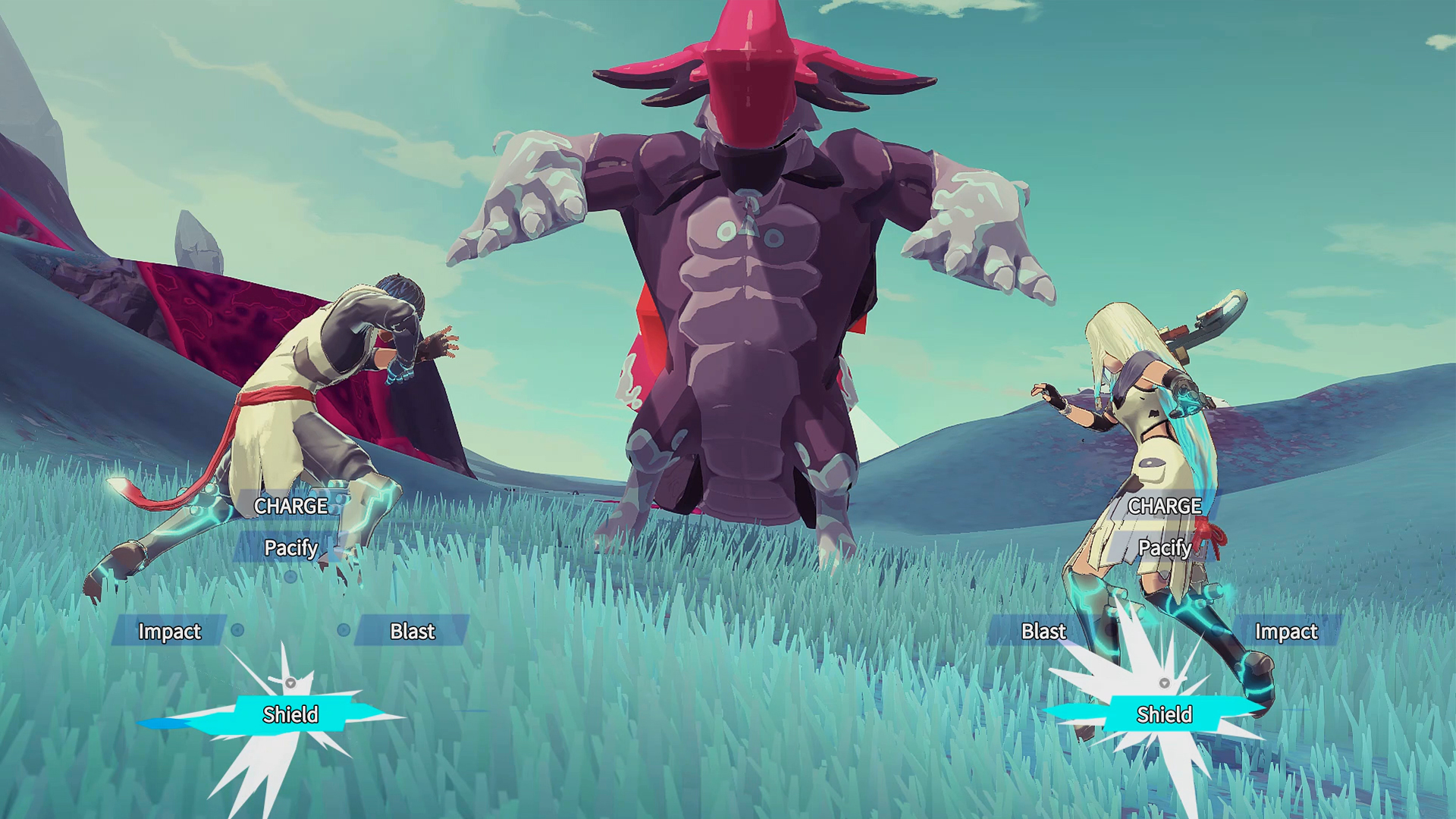 This relationship RPG takes place on some beautiful alien landscapes, with vivid skyboxes, glowing pink crystals, waterfalls, space apple trees, and billowing grass. When you explore the world of Haven as a couple, you can hover and glide across the world, and pick up traces of energy, which you will collect by flying through a line of it. This energy will also be essential to powering your ship, and therefore your life, so make sure to pick up plenty of it.

There are, of course, aliens to defeat too. Yes, this game does actually have combat. You'll be given four options, Blast, Impact, Pacify, and Shield. Admittedly, I didn't get enough time with the game to fully understand the implications of all of the moves, but the couple dynamic doesn't end just because it's time to fight. When in battle, you can use doubled-up attacks by having both characters charge and unleash a blast at the same time, doing much more damage than two separate attacks would. You need to think smart and use strategy to get through some of the harder fights and weigh up what moves and combinations will benefit you most.

But of course, the question is, why are Yu and Kay on this lonely rock? Well, they know that someone, something, is following them, and Yu declares that if necessary, she will kill anyone that attempts to separate the two of them. This is a relationship that has already come at a cost, and in the full game, we'll be discovering exactly how far they will be willing to go to stay together.

After playing Haven, I just want to play more. I want to see things develop further between Yu and Kay, I want to know what dark history they're hiding, and I want to see what happens next. It's a slow-paced, relaxing RPG, and one I can't wait to see more of. It might not be Furi 2, but it's definitely gotten me excited.

The game is due next year on PC (Steam) and consoles.