Furi Review: The Shadow of the Colossus of Character Action Games

As the first title from The Game Bakers to grace the Playstation and PC, Furi is a hearty distillation of the character action genre into the simplest formula imaginable: non-stop boss battles. With character designs composed by Takashi Okazaki of Afro Samurai fame, the story follows a silent protagonist that's let loose by a talkative gentleman wearing a bunny mask (who might remind some of Ninja Ninja, also from Afro Samurai) to escape his jail confinement and return to the free world, slashing apart anyone that stands between them and freedom. 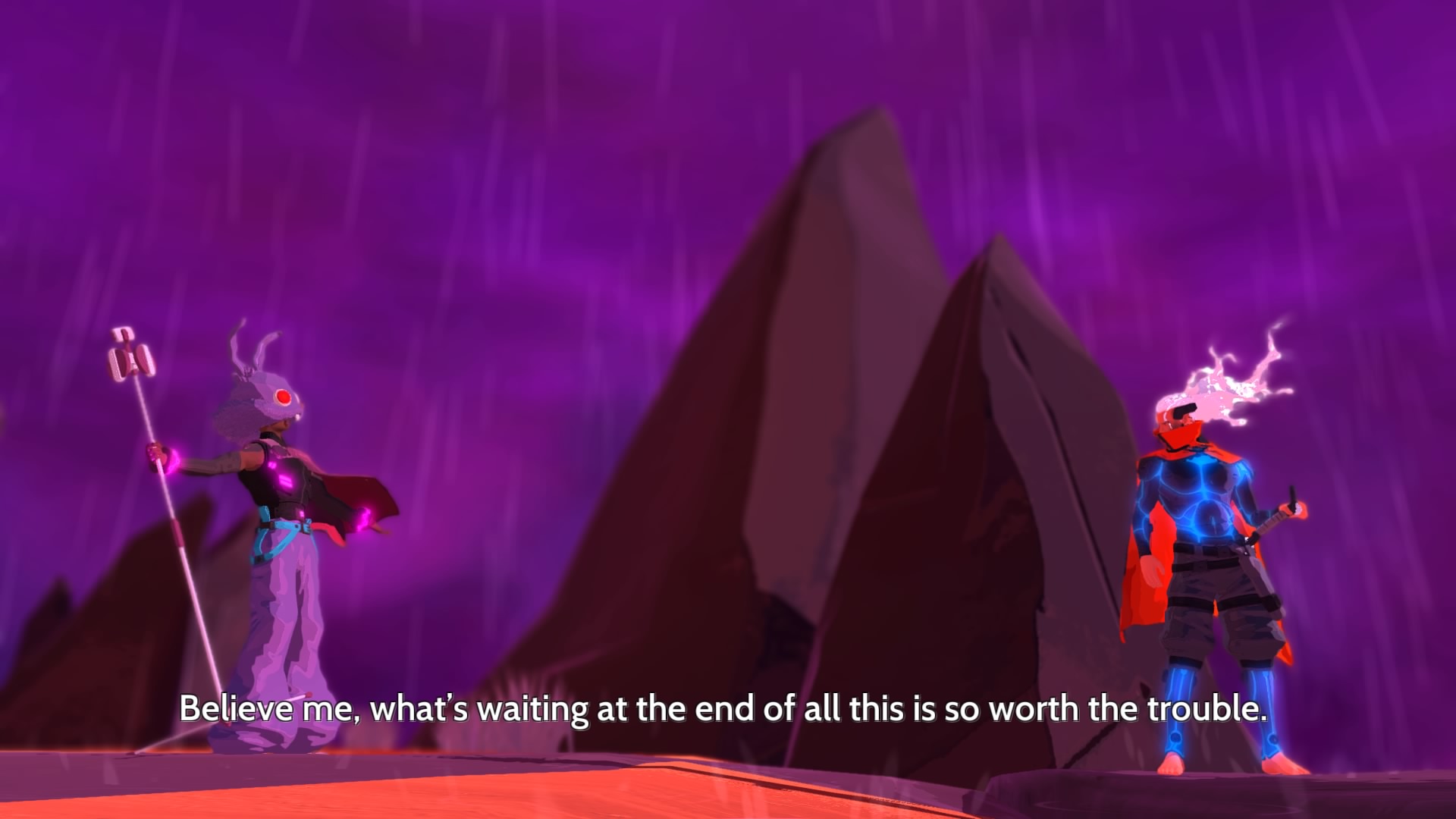 Furi offers a trimmed down action experience that gets rid of the fluff that's been a part of the genre for years. Gone are the plodding sections of enemy fodder to whet your blade on, the experience gains and unlockable weapons. The only tools at the player's disposal are the very ones that the player first escapes his jail bondage with: a sword, a gun, and some fancy moves.

Taking heavy notes from the likes of Platinum Games and Hidetaka Miyazaki, Furi's unique style of character action beautifully splices swordplay with distanced battles fought with firing massive sprays of bullets at either side. While the hero's gun might not be able to put out the same volume as the boss' Danmaku-esque patterns, it certainly does the job for clearing the field to prevent getting struck down by a stray bullet.

The abilities in the hero's arsenal are limited down to four simple disciplines: melee attack, shoot, dodge, and parry. All of these save for the parry can be charged up to increase their efficiency and certain fights might go smoother if you use more charged slashes, while others might rely almost exclusively on gunfire. Swiping the right analog stick and holding it will cause the hero to glow orange and charge up a power attack for the next melee swing they perform. This ability sounds nice and can do a great bit of damage, but more often than not, I would get smacked by the enemy's attacks in the middle of charging if I wasn't careful. 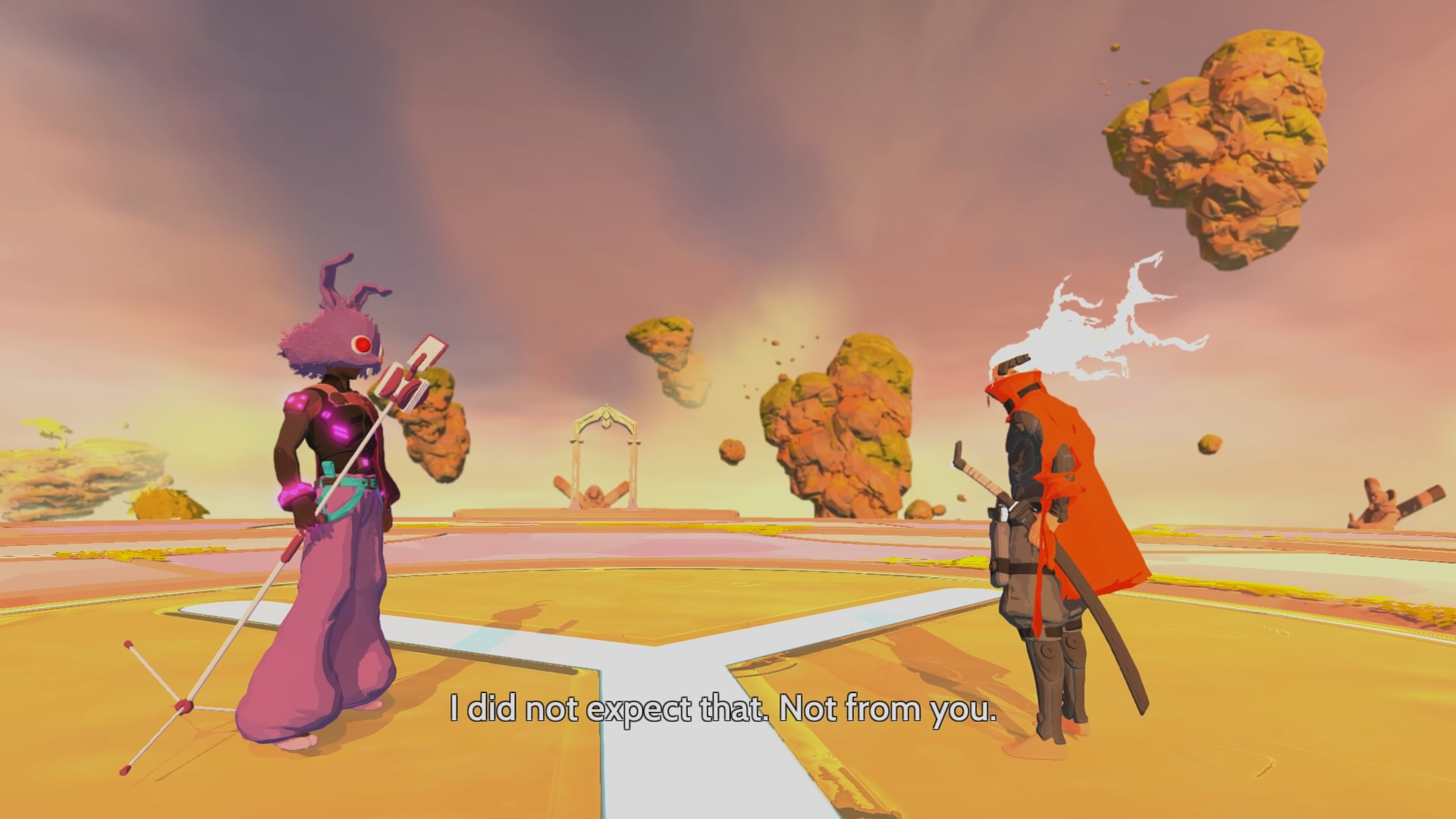 Despite sounding simplistic in terms of not having any sort of progression or upgrade systems, Furi does a great job of enhancing the player's roster of skills and abilities with reinforcing the basic mechanics in various ways throughout the gauntlet of boss battles. Certain boss fights (The Line comes to mind) take mechanics and build an entire encounter around utilizing those skills in specific ways. Some fights have a focus on up close and person sword duels, others might fill the screen with bullets that invoke thoughts of NieR or the Touhou series with their complexity of patterns that need to be dodged through or parried.

Each of Furi's various fights feels so unique amongst one another that I could pick any one scene out from the chapter select screen and my muscle memory would immediately kick back in and remember the gimmicks and style to that particular encounter. Not every boss is memorable in a positive light, however. There were two bosses in particular that I found to be a complete chore to fight against and would rather not have to face them on the battlefield ever again. With each encounter operating as their own isolated puzzle of battle mechanics and dodging bullets, some fights can tend to be more frustrating that others. There's nothing that can sour one's mood more than bashing one's head against a wall trying to beat a particular boss for nearly an hour straight (which happened not once but twice during my seven-hour playthrough of Furi). 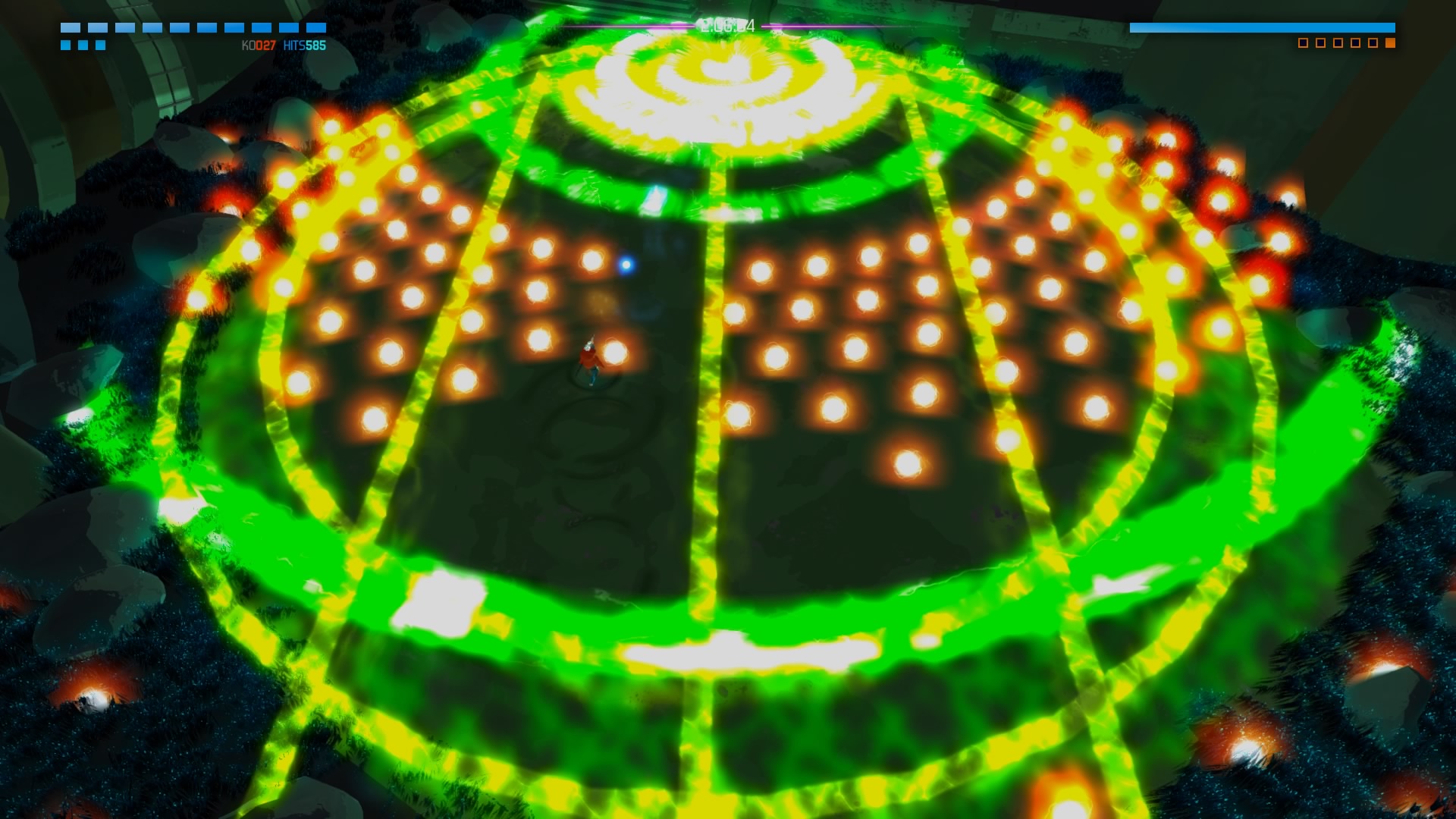 Furi's diverse roster of antagonists that separate the hero from his long-sought freedom each operate under their own ruleset and handle quite uniquely to one another. Each time I stepped into a combat arena, it felt like a new puzzle was being laid at my feet and I would have to undergo a trial by fire in order to solve it. Not only do each boss have their own unique gimmicks and weaknesses, but each of the boss' multiple health bars are their own separate phase and attack patterns. For most fights, the player is given three health bars to take out the enemy completely. Knocking out one health bar from the enemy will recharge the player's life and recover any lost health bars. On the downside, being knocked out by the enemy on a given phase will recover their health back up and reset their attack routine. Any attack patterns that the boss pulls out during the start of the fight will have to be endured once more. For some of the more drawn out fights, this can sometimes be a two or three minute section of dodging and the occasional counterattack before the player can deal any real damage and progress to the next stage. 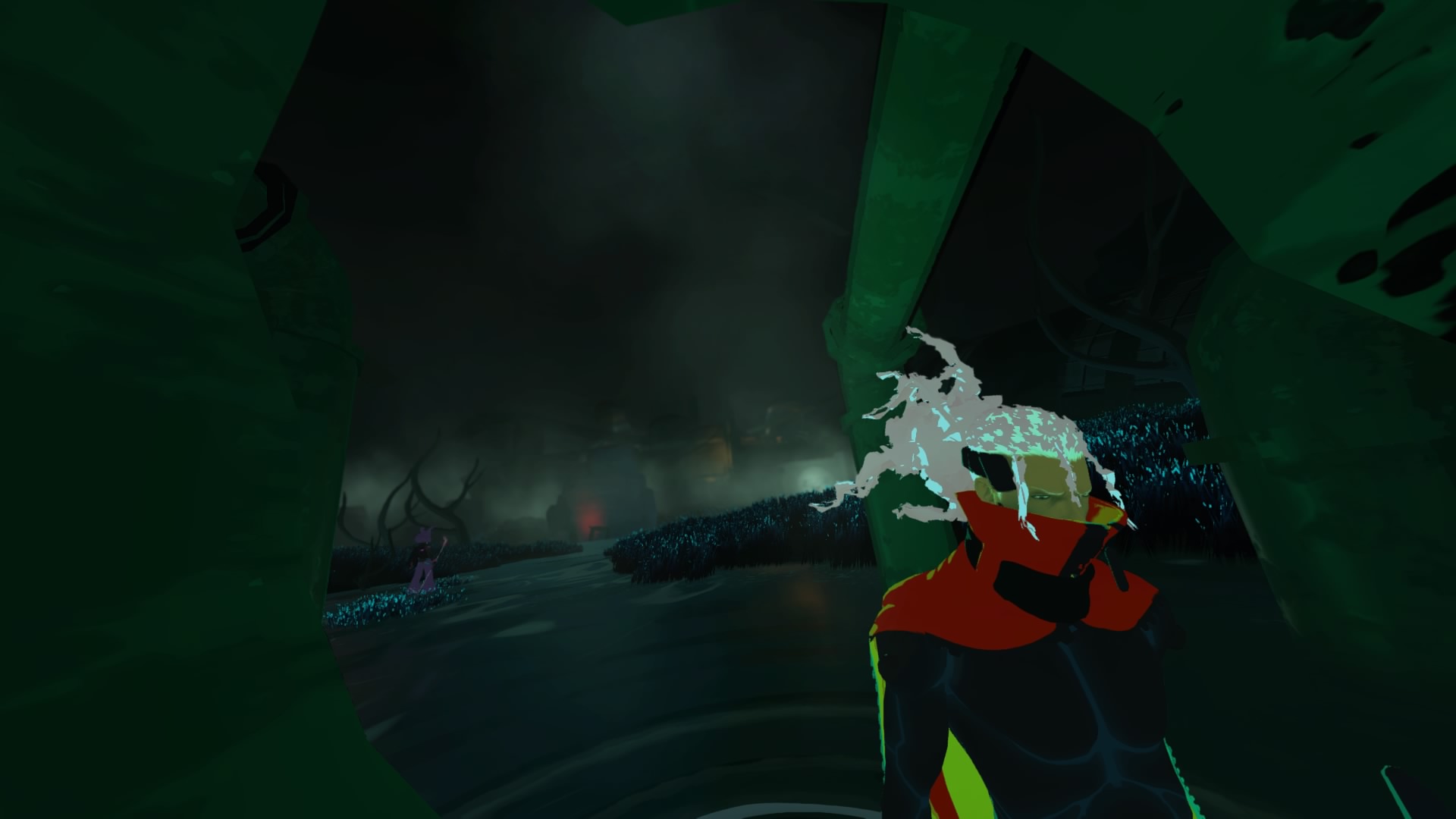 After turning Furi on for the first time, the amount of style put into this boss rush experience is immediately promising. The worlds crafted within each brief encounter of Furi are varied and filled with a vibrant palette that the doesn't do much to distract the player from the on screen action, but rather helps to fill the worlds with their own distinct details between encounters yet is smartly toned down to more muted tones during the actual encounters. The bright colors of the player character and enemies in each fight pop on screen and give the on-screen action more visibility, something keenly necessary for reading the opponent's moves and reacting as quickly as possible. When not in combat, wandering from one encounter to the next is filled with set pieces and camera angles that any journeyman filmmaker would approve of.

It's impossible to talk about Furi without bringing attention to the soundtrack that was compiled together specifically for its release, with all of the tracks composed specifically for the various battles and ambience. Notable acts on the soundtrack include Danger, Kn1ght, and most recognizably, Carpenter Brut. Hands down one of my favorite tracks in Furi was during the sniper battle with The Burst and was one that I never grew tired of, even with repeated retries from not being able to take out her final phase.

Furi is undoubtedly one of the most stylish character action games to join the genre, with catchy electronic beats and stylish sword fighting to delight the senses. While the difficulty is on the higher side, fights can feel punishing yet ultimately rewarding once the final hits are struck. As a fine distillation of the genre, I enjoyed my brief time with Furi, even if it took repeated attempts to 'get good'.