Yesterday during the Xbox & Bethesda E3 Games Showcase, 343 Industries provided a first peek at Halo Infinite’s free-to-play multiplayer, but just minutes ago they provided a much deeper-dive into what to fans can expect. Long story short, 343 is not reinventing the wheel with Halo Infinite – they’re once again focusing on Arena and Big Team Battle, but with a number of small tweaks to the way equipment, vehicles, and other mechanics work.

Since Halo Infinite multiplayer is F2P, customization and cosmetics will also be a big focus, although thankfully, it sounds like 343 are taking a pretty enlightened approach to them. There will be no loot boxes or other randomization system in the game, and once you buy a battle pass, you’re free to continue leveling it up forever. If you buy multiple battle passes, you can choose which one you want to pour your progression into. Check out the full Halo Infinite MP overview video, below.

Itching to jump into a Warthog again? Here’s a bit more detail about Halo Infinite MP:

For nearly twenty years, Halo multiplayer has been defined by sandbox-focused emergent gameplay that offers players a wide array of weapons, vehicles, and toys in the name of competition and good fun. With Halo Infinite, the team at 343 Industries is embracing the franchise’s legacy while imbuing it with new modern twists to lean into the series’ strengths while simultaneously laying a foundation on which to grow and further evolve in the months and years beyond launch.

In addition to returning favorites and brand-new weapons, Halo Infinite’s sandbox is punctuated by the addition of Halo 3-esque equipment – game-changing limited-use abilities that players will scavenge for during a match. The Threat Sensor is an area-of-effect support device that periodically pulses and illuminates enemy players within it’s radius, while the aptly named Repulsor can be used to deflect projectiles and anything else that gets in the way. Whether it’s zipping across a map to gain the high ground using a Grappleshot or digging in your defenses with a Drop Wall, equipment brings new strategic and tactical options to Halo Infinite’s frenetic multiplayer combat.

Vehicles have always been a pivotal part of Halo’s sandbox and Infinite will include an assortment of tried-and-true UNSC classics in addition to Banished-inspired favorites – many of which now support customization. From strafing runs in a Banshee to fireteam incursions in the new Razorback to the satisfying splatter of the Chopper, the UNSC's garage is well equipped. 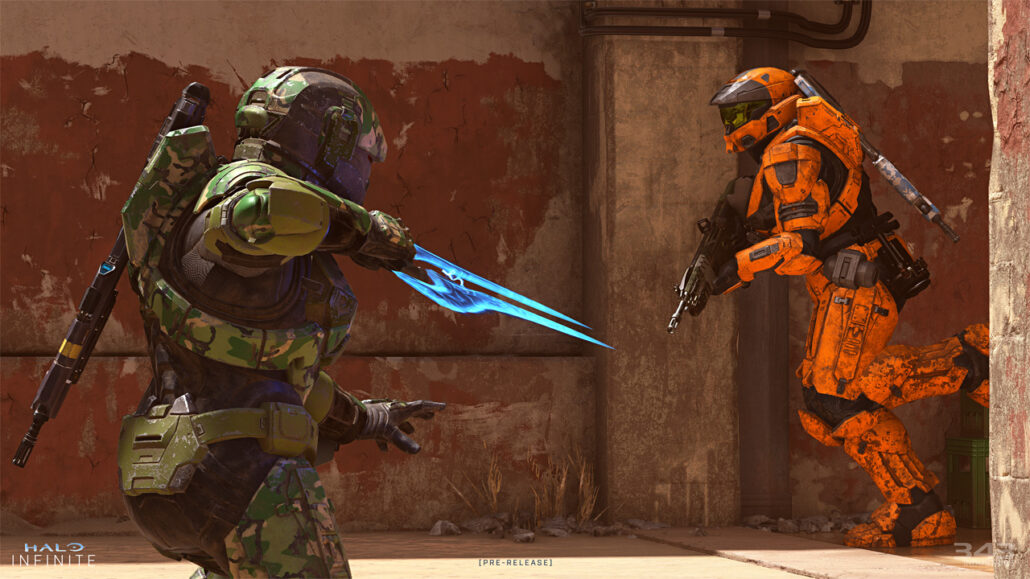 At the core of Halo Infinite’s multiplayer offering is the Arena, which once again pits two teams of four Spartans against each other in a variety of new and returning modes. Halo’s Arena has and continues to be defined by fair starts and teams working closely to control key areas of a map while utilizing the sandbox in the most impactful manner. Scavenging also remains a key component – players will strategically work together to acquire newly spawned weapons off a rack or take down an opponent to loot their equipment and use it against them. Remember your Academy training, jump into battle, and revel in the accolades of legendary multiplayer announcer Jeff Steitzer.

When Halo Infinite releases this holiday, it will also usher in the long-awaited return of Big Team Battle. This classic series stalwart is back, but bigger and better than ever, supporting 24 players on large vehicle-friendly maps tapping into the full extent of the sandbox. BTB is the epitome of the Halo experience and the ultimate Spartan battle fantasy with Pelicans swooping in to deploy fresh vehicles, weapon ordnance dropping from the sky, and tactical updates from Commander Laurette. Big Team Battle is the wild, raucous, fun social experience that cranks everything up to 11 and we’ll be sharing more details later this summer.

In addition to Ranked and Social matchmaking playlists, players will also experience limited-time seasonal events with special rewards on the line. Console and PC players will play together via crossplay while support for cross-progression means you can move freely from one platform to the other and keep working on your Spartan’s journey. Xbox Series X owners will also enjoy up to 120FPS on supported hardware and PC players will have a wide variety of configurable settings spanning framerate to graphics to key binds and more. Of course, online isn’t the only way to enjoy multiplayer – Halo Infinite will also support splitscreen on Xbox and LAN play via a PC local server.

The F2P Halo Infinite MP suite will launch alongside the core single-player game on PC, Xbox One, and Xbox Series X/S sometime this holiday season. What do you think Halo fans? Liking what you're seeing? Or would you prefer a bit more innovation?