Back in August, Microsoft and Monster Energy announced a Halo Infinite promotion that would let players earn Double XP boosts and exclusive in-game items. That promo was supposed to kick off on September 1 ahead of Halo Infinite’s holiday release, but of course, the game has now been delayed to some unspecified date in 2021. Soooo, the promotion’s off, right? Think again! The cans have already been printed, so this thing is going ahead!

Folks who buy cans of Halo-Infinite-themed Monster Energy can bank their Double XP boosts for use whenever the game finally happens to arrive. In total, players will be able to bank up to 60 hours of XP boosts, although I really don’t recommend drinking that much Monster Energy. Here’s a bit more detail about the Halo Infinite x Monster Energy promotion.

Double XP Boosts are for use in multiplayer to double the amount of experience points earned during the time the boost is active, and you get one boost per can. Yes, that means if you purchase a case of 24 cans, you will get a code that will unlock 24 Double XP Boosts from the receipt. Players can earn up to 60 hours of Double XP Boosts with their Monster Energy purchases.

In the U.S. between September 1 and December 31, 2020, fans who purchase limited-edition Monster Energy Halo Infinite cans at select retail stores nationwide can bank 30-minute Double XP Boosts, enter a sweepstakes to win a variety of prizes, and unlock access to the Halo Infinite world through a Snapchat filter encoded on each can.

And here’s a look at the exclusive weapon skins… 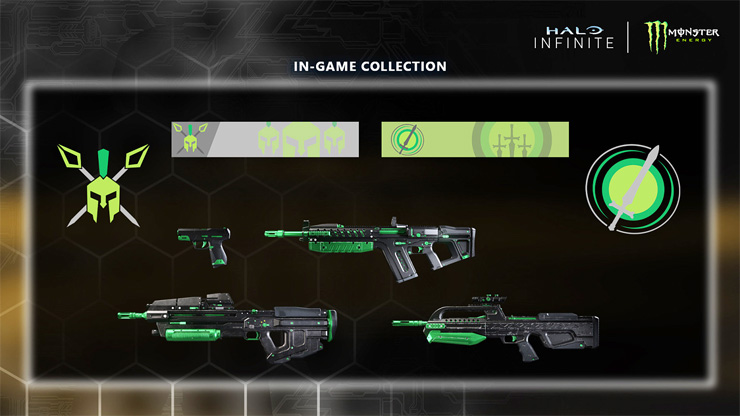 Are you going to be guzzling some Monster anyways? Save your receipts and bank your rewards, right here.

Halo Infinite is coming to PC, Xbox One, and Xbox Series X sometime in 2021.