Halide Mark II – Takes iPhone Photography To The Next Level

If you have professional knowledge of photography and take photos on an iPhone, chances are that you already know about Halide. It is one of the best photography apps in the App Store which provides complete control over manual control like exposure, focus, shutter speed, ISO and white balance. With Halide Mark II, the developers have spent considerable effort on revamping its user interface, introducing helpful gestures, and adding features that both professional and amateur photographers would love.

Halide Mark II has a clean interface which provides easy access to manual controls, but tucks them away when not required. Gestures and simple taps provide quick access to these manual controls. The camera viewfinder and the photo reviewer have been completely redesigned to work well with the new iPhone 12 models, and even the smaller iPhone SE. Specially in the photo reviewer, users can now see more information at a glance, without having to tap through to reveal complete metadata.

Halide has supported RAW image capture before but with Mark II, it has gone a step further. The developers claim that the app is ready for ProRAW, which Apple will introduce in a software update for iPhone 12 Pro. This is how Apple explains ProRaw:

ProRAW gives you all the standard RAW information, along with the Apple image pipeline data. So you can get a head start on editing, with noise reduction and multiframe exposure adjustments already in place — and have more time to tweak color and white balance.

It's unclear how Halide already supports this upcoming feature, which is not out yet, but we will find out more soon.

Coverage is one of the new features in this update which captures computational photos and RAW images in one go. It applies everything that the iPhone offers including Deep Fusion, Smart HDR 3 and more, and captures it in a RAW DNG format so that it can later be edited.

The other new feature is Instant RAW, which is a balancing act between processed JPEGS and unedited RAW files. Instant RAW captures more detail and color than a JPEG, but also grain and noise, which gives it a unique neutral look. Unlike ProRaw, it works with all iPhone models that Halide supports. 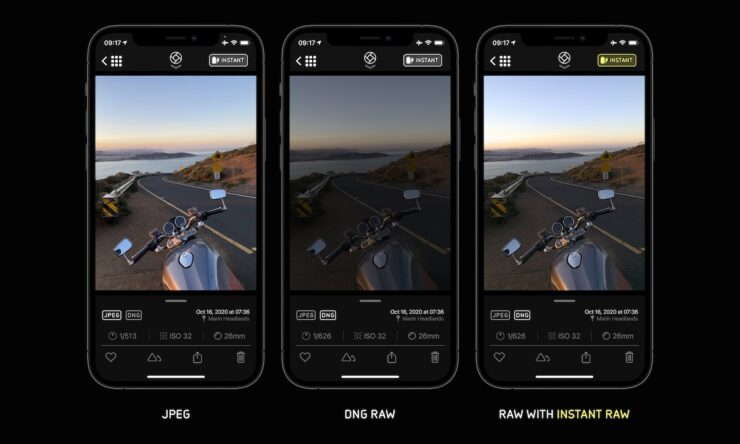 Apart from these updates, the app also brings new features like colored zebras, XDR analysis for data visualization based on 14-bit RAW data, RGB waveform for improved manual exposure, and much more.