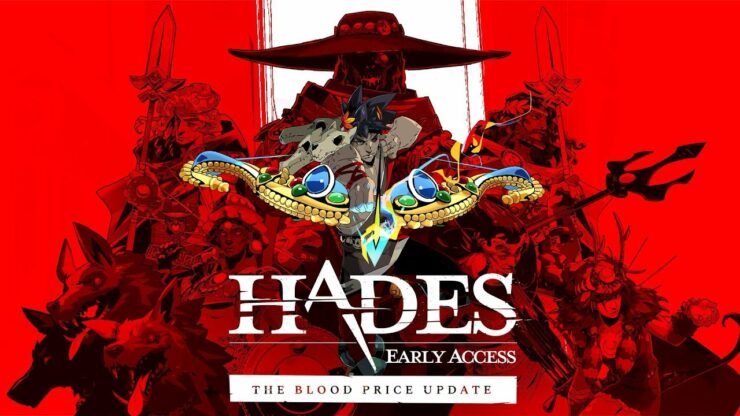 Supergiant Games' latest title, Hades, has been out for over a year and a half since first releasing as an Early Access title on Epic Games Store in December 2018. As the roguelike adventure marches towards a full version 1.0 release, new content updates have been coming to Hades at a fairly regular pace. Now, the final major content update before leaving Early Access is upon us with the release of The Blood Price update.

Below are the full patch notes for The Blood Price update for Hades, still in development in Early Access. This is quite a substantial update, so if you haven't played Hades in a while, there are quite a lot of changes to look forward to during your next run to escape the underworld.

• New Boss Fight: see if you can find this dangerous new encounter, and reap the rewards
• New Legendary Aspects: discover the hidden forms of the Bow, Shield, and Rail
• New Foes and Mini-bosses: face the Wretched Sneak, Dracon, Doomstone, and more
• New Boons & Upgrades: gain dozens of new powers, including Duo Boons for each Olympian pairing
• New Goods in Stock: look for many new items from Charon and the House Contractor
• New Art & Visual Effects: bask in the atmosphere, with newly added character models and animations
• Expanded Story: experience new narrative events for nearly every single character in the game
• Updated Code Base: our newly optimized game engine offers smoother performance for many players

• Updated our code base for improved performance and compatibility. The game should now run on more PCs above the minimum system requirement, and run faster for most players.

• Note: Please make sure to update your graphics drivers to the latest version to take advantage of these improvements! If you cannot start the game, or experience worsened performance relative to past versions, please reach out to us at discord.gg/Supergiant and we will work with you to get it resolved.

• Thanatos: increased rate of attack for his single-target Death Sentence
• 'Trial of the Gods': increased frequency and tracking of Artemis attacks; increased frequency and quantity of Dionysus attacks
• Wringer: new! This Tartarus foe grabs and briefly stuns you
• Wretched Sneak: new! This Tartarus mini-boss is elusive and deadly
• Doomstone: new! This Tartarus mini-boss is what Brimstones want to be when they grow up
• Bloodless Slam-Dancers, Wave-Makers, and Burn-Flingers no longer appear as Tartarus mini-bosses
• Megaera: ground blast attacks detonate slightly faster
• The Fury Sisters: increased health and attack speed under Extreme Measures (Pact)
📢 The Bloodless: improved leaping behavior for all varieties
• Wave-Maker: reduced Elite health and armor
• Bloodless Bone-Raker: new! This Asphodel foe attacks with consecutive swipes
• Dracon: new! This Asphodel foe burrows and uses ranged attacks
• Witches Circle: new! This Asphodel mini-boss encounter pits you against elite Spreaders
• Gorgon: increased Elite armor and firing sequence
• Skull-Crusher: slightly increased the duration the Elite version stays on the ground
• Bone Hydra: reworked; the main head now has 4 new variants you may encounter instead of the original, each with their own attacks (based on what the smaller heads can do)
• Elysian Spear Trap: now link their attacks whenever one is activated
• The Exalted: increased damage for Brightswords, Greatshields, and Strongbows
📢 The Minotaur: slightly reduced turn speed on Bull Rush attack; updated various other attacks
📢 Theseus: reduced damage of explosive attack under Extreme Measures (Pact)
📢 Fixed Styx Poison effects sometimes not clearing after an Encounter

• Family Favorite: slightly reduced effectiveness; you now can see your current bonus from it in Boon Info
• Olympian Legacy: moved to be the counterpart to Gods' Pride; now called Gods' Legacy; reduced the max. benefit this could provide (now that there are many more Duos; invested Darkness will be refunded)
• Dark Regeneration: slightly reduced max. benefit

Well of Charon & Other Items

📢 Routine Inspection: no longer prevents getting Fated Authority charges during an escape attempt
📢 Forced Overtime: added foe-specific limitations in cases where this was particularly unfair...
📢 Benefits Package: reduced how much bonus Armor could be provided by the Bruiser Perk

• Added dozens of new jobs to order with your hard-earned Gemstones and Diamonds, such as...
• Bat Cage, All-Seeing: survey the entire House with these specially-trained reconnaissance bats
• Aquarium, Cubical: since all those river-denizens you're procuring out there do need a place to live...
• Sundial, Imported: surely this will settle the mystery of whether it is day or night at any given point...
• Gallery Paintings, Landscapes, and Portraits: revamped gallery space with bigger, bolder images
• Darker Thirst: speaking of hard-earned Gemstones, this new upgrade lets you hard-earn them faster
• Downgraded the poor House Contractor's work desk, even after all that (though you can upgrade it)

• Added new chambers to Tartarus, Asphodel, Elysium, and the Temple of Styx
• Updated the layout of Charon's shops to make room for a certain item that appears from time to time...
• Other minor fixes and improvements to various chambers

📢 Improved messaging and feedback in the Pause menu when choosing between Quit and Give Up
• Updated some formatting on the Keepsake Screen
📢 Some powers with range-specific bonuses show an indicator on their aim previews
• Fixed Underworld Map showing mystery rewards after clearing the highest Heat level for rewards
• Improved feedback on successful Backstab attacks
• Updated feedback activating Ruthless Reflex (Mirror) (enhanced the visual, removed the text)
• Added Info button on the Pact screen for a reminder about how it works
• Updated presentation when new Boons and other powers are added to the sidebar
• Updated some tooltips on the Mirror of Night
• Added improved error messaging if auto-save fails for any reason
• Other minor fixes, changes, and improvements

• Added many new narrative events, some for nearly every character (with ~3,500 new voice lines!)
• Extended Affinity Gauges for Achilles, Cerberus, Charon, Poseidon, Hypnos, Hermes, Athena, Ares, Dionysus, and the Fallen Warrior (you can give them more gifts)
• Added Duo Boon interactions for all Olympian pairings that didn't already have them
• Added many, many new Zagreus voice lines to various contexts for additional variety
• Added Codex entries for various new Perilous Foes and Artifacts, plus a new Fable
• Added a number of new Inspect Points to new chambers and some House Contractor items
• Updated dozens of older Zagreus voice lines for performance consistency
• Updated Codex entries for Achilles and the Fallen Warrior
📢 Added still another new Early Access Ending variant
• Spurned Olympians will speak over the death presentation if you perish during a Trial of the Gods
• Chaos will speak over the death presentation if you perish after taking damage from a curse
• Added emote animations and other minor improvements to various narrative events
• Updated requirements and other minor changes to various narrative events
• Fixes and tuning to various contextual voice events

📢 Added Bright Cursor setting to Settings menu; it can make the mouse cursor easier to spot
• Added VSync setting to Display menu; toggling can help improve performance in some cases

• Updated Development Roadmap to reflect our plans for our next v1.0 Launch, slated for later this year
• Added more translated text content in supported languages (translations are ongoing for newer content)
• Added Community Translators to Credits (Thank you for all your efforts!!)
• Added more Community Contributors to Credits (We really appreciate your support!!)
• Reduced minimum system requirement to DirectX 10 (was DirectX 10.1)
📢 After Thanatos encounters, he will sometimes teleport toward the chamber exit to get there faster
• Thanatos now shows an invulnerable effect when struck
• Reduced requirements to unlock Perilous Foes entries in the Codex
• Infernal Trove pedestals should interact with projectile attacks more consistently
📢 Sisyphus gives more Darkness
📢 Added more contextual tips when learning to use the Rod of Fishing
📢 The gameplay timer now stops during Thanatos encounters
📢 You now can pet Cerberus without having to give him Nectar
📢 The Keepsake Screen has unique messages for each character with whom you forge a bond
• The crowd has more dynamic reactions in the final chamber in Elysium
• The Head Chef in the House of Hades now cuts onions ceaselessly
• You now can interact with the Featured House-Servant Wall in the Lounge; more characters eligible
• You now can interact with the Motivational Wall-scrolls in the Administrative Chamber
• You now can irritate caged shades in Tartarus
• Tuned interact distances on some characters and House of Hades objects
• Removed the shimmering halo on the portrait of Lord Hades (the Olympians can have it)
• Shades in the House of Hades have more to say
• Improved presentation confronting the Tiny Vermin in the Temple of Styx
• Improved presentation exiting the Administrative Chamber in the House of Hades
• Updated flavor text on various screens
• Updated boss nameplates in some encounters
📢 Various text fixes, updates, and clarifications

• Hopefully not too many, thanks to our diligent Beta Testers!

Hades is available now on both Steam and Epic Games Store. A console release is planned for later in 2020. According to Greg Kasavin, designer at Supergiant, Hades 1.0 is still planned for "the second half of 2020". Hades is currently on sale on Steam Early Access at $19.99, 20% off the regular price.