Rockstar’s next-gen GTA V port is releasing in less than a month, but the developer is still keeping all the caps tightly closed when it comes to revealing new in-game media content or gameplay details regarding the upcoming game. However, earlier this week, we got to know that the upcoming issue of Official PlayStation Magazine will feature an extended piece on the game that will reveal tons of new details and screenshots. The magazine is now out and some leaks from the feature have emerged on internet, confirming that the PlayStation 4 version of GTA V will run at a native resolution of 1080p. 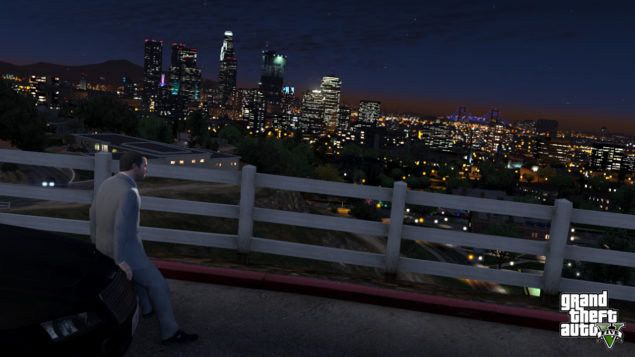 Despite being a remastered version of a game that has already been released and played by millions on the last-gen video game consoles, the upcoming next-gen consoles and PC exclusive GTA V is numbered among some of the highly awaited games coming out this year. It will not be more than a month before gamers will be able to experience the in-game Los Santos like never before, yet still, Rockstar, the developer of the game, is keeping things tight. However, it recently came to light that the upcoming issue of Official PlayStation Magazine will feature a full 10 page cover on "Los Santos Loveliness."

The latest issue of Official PlayStation Magazine is now out and the full 10 page next-gen GTA V cover story has leaked on the internet revealing several new details and information about the upcoming action-packed open world game. The leaked scans of the feature show that the game runs at a native resolution of 1080p on Sony's latest video game console. According to the OPM, "Grand Theft Auto V on PlayStation 4 breathes fresh, oh-so-new-gen life into the greatest game ever committed to Blu-Ray." Here’s what the OPM feature reads:

“Farewell, 720p. You served your purpose adequately enough. Still, our eyes have been gagging for 1080p’s pin-sharp pleasures and Los Santos sandbox is only too happy to oblige on PS4, running at a native 1920 x 1080 pixels. For a game erected on hundereds of tiny incidental details, the resolution bmp is a huge game changer for GTA V.”

"Glimmering 1080p presentation, hugely increased draw distance, 100 new songs, fresh wild-life, a bumper version of GTA Online, this is sandbox you've dreamt about ever since you slotted Sony's angular baby under your TV"

Due to copyright claim and piracy issues, all scans of the full Official PlayStation Magazine next-gen GTA V cover story can’t be posted here, but just for confirming that the magazine states the game’s resolution as native 1080p on PS4, below are two scans and a cropped piece of one scan, provided by Gamepur.

Next-gen GTA V will arrive on PlayStation 4 and Xbox One consoles on November 18 this year. PC version of the game will be launched next year on January 27. Stay tuned for more info on the game.