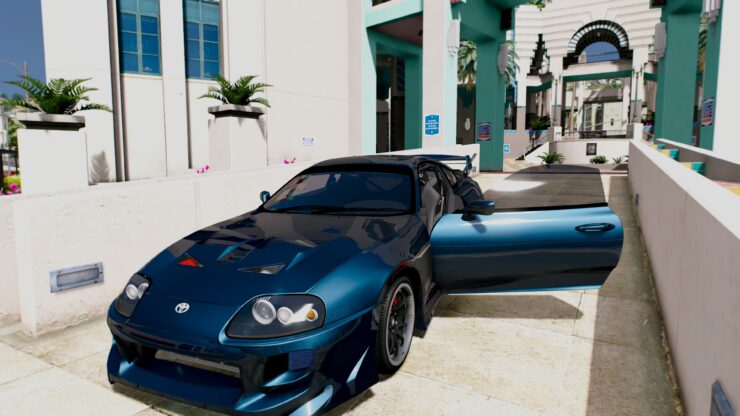 A couple of days ago we reported on GTA V Redux, stating that the ambitious mod for the latest Grand Theft Auto installment was very close to release.

Now it's official: the mod developed by Josh Romito will be out on August 26th. While the most noticeable improvements are probably in the game's graphics (which includes re-written weather, simulated global illumination, volumetric lighting and more), there are also plenty of gameplay enhancements ranging from reworked police to an improved melee and ranged combat (with realistic recoil), increased random game events and reworked handling for vehicles.

Here's the full list of changes brought by GTA V Redux. Of course, since there isn't any official support for mods this will only be available to PC users; the creator warns that there will be a 5-10 FPS drop when compared to the vanilla version of the game, so keep that in mind if you download GTA V Redux.

- 100% re-written weather files from scratch, without a detail over-looked. All weathers have been carefully crafted to provide stunning sunrise/sunset, as well as mid day and night time. All weathers are made to blend naturally, and create an image that will leave you breathless.

- Lowered and re-configured fog for natural, yet revealing landscapes with a perfect atmospheric touch.

- Newly added volumetric lighting for all times of day.

- Individually crafted direct light for each and every body of water in the game. Providing the best looking water to date!

- More location based timecycle edits to give that custom touch to specific area's in the city and country side.

- Additional color correction and postfx applied to each weather separately, to allow for the perfect balance.

- Massively improved terrain tessellation, adding detail to the environment that has never been seen before.

- Added multiple brand new weathers into the cycle of the weather system. Creating an ever changing and natural cycle, leaving everyday with a new transition and experience.

- Removed sniper lens and all other lens color toning.

- Only the best that ReShade has to offer. Perfect color correction, bloom, tonemapping, and more.

- 15+ ReShade options to custom the look of your game to your own preference:

- Alternate presets in older versions of ReShade for those who cannot runReShade 2.0.

- Alternate guide to even further custom the look of your game through the provided enb and reshade shaders.

- Custom ground and rock for large parts of the countryside.

- Leaves fall from tree's, bushes, shrubs, and palms with much more consistency.

- Paper and garbage blow from trash trucks at a higher rate and density.

- Adjusted the color of all blood particles for a more natural appeal.

- Female police added to dispatch, as well as other un-used character models.

- New rate of fire for all weapons, close to real life counter part.

- Much farther lock on distance, bullets are now a projectile instead of instant hit.

- All rockets travel much farther, and will not detonate unless they make contact within 800 meters.

- Brand new weapon smoke, muzzle flash, and barrel trail effects, for both the player and ai.

- All aerial vehicles with rockets, fire them at a near semi-auto rate.

- All playable characters are now 70% MORE likely to punch, rather than kick.

- Peds and enemies can now take more bullets! Shots from behind are no longer instant kill (unless head-shots).

- 100% re-configured population levels, with options to customize to your liking.

- More and varying police now spawn on the streets and hunt down criminals! Watch out!

- Fluctuating population levels between different times of day and location.

- Brand new vehicle spawning, and the addition of all dlc vehicles into the sopawn cycles.

- Now see up to 8 police cars with helicopters chasing down ai criminals in the city!

- All pedestrians react much different, with much larger variation. Depending on the individual you approach, reactions will different.

- Brand new handling for EVERY SINGLE VEHICLE IN THE GAME! (Including heli's, planes, boats, etc)

- Corrected suspension and weight of vehicles.

- Modified all damage and deformation limits to provide amazing crashes.

- Increased headlight distances, for both low beam and high beam.

- Brand new ragdoll and euphoria effects similar to Gta 4 with a custom twist.

- Falling peds now gravitate towards any and all objects to help them stay up.

- Flag and cloth physics have been slightly altered to provide smoother movement.

- Vehicle crashes now react as they should, vehicles move and collide with natural laws of gravity and reactions.

- Wind physic reactions of all plants has been drastically altered to provide realistic motion.

- Player can fall from a higher distance before going ragdoll and taking damage on impact.

Some GTA V Mods Contain Malware, Download At Your Own Risk

The Problem With GTA V on PC