The new version of GTA V is just round the corner. The game is coming to PCs next week and we have a rumor along with certain news for you. It so happens that a picture has emerged as leak from the Russian retail side of the GTA V which shows the different covering of the discs available for the PC version of the game and the manual box aswell. 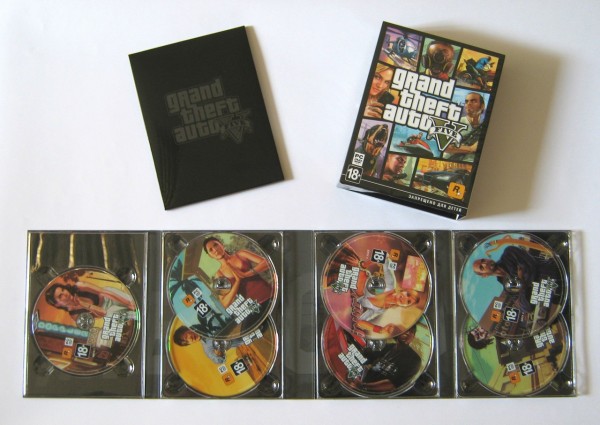 The PC version of the game is highly detailed with a significant upgrade on the graphics with players waiting for the 4K goodness. This can be backed up by the fact that the game expects to sell over a million copies before the launch. You can read more about that here.

Additionally, what's a confirmed bet is that the team plans to release updates for all the versions at the very same time. In an Interview with Gamespot, lead gameplay designer John Macpherson clarified that the PC version will not lag behind in terms of updates.

“We plan to deliver updates to PC and consoles simultaneously,” he said. “There can be occasional variations in timing based on specifics from one console to another but PC will not be on a separate timetable to other platforms.”

This comes as a ray of light for the pC gamers who were confined to a dark room until now where there was no GTA V. So now you can pick up your GTA V easily on the 14tth of April with no worries about the support and late updates.

He also answered a number of other questions aswell. Like when asked about the delay of the GTA V on the PC, Macpherson explained that it had to with with the changes in last and current gen versions of the game.

“It comes down to bandwidth. We want each version of the game to be the best it can possibly be, and that means having the core members of the original GTA 5 team working closely with the best PC developers from across all Rockstar studios,”

“The same crew that did great work on the PC versions of Max Payne 3, L.A. Noire and GTA 4, essentially. A large portion of the team that worked on GTA 5 for PS3 and Xbox 360 also worked on the PS4 and Xbox One versions and all of the GTA Online content, including Heists.

“Since the new generation console versions and the PC version share similar architecture, the team also continued to work on the PC version. With each version adding features and requiring the focus of the same key people, that takes time.”

The lead Gameplay designer also complimented his colleagues by saying that GTA V benefited from the “huge pool of knowledge” at Rockstar Studios and that the GTA V on OC is “the ultimate version of an amazing game.”

I guess that sums it up perfectly. Do share your own views with us in the comments section.