As the release date of the next-gen remastered version of Rockstar’s record-breaking sixth most sold video game of all-time gets closer, the hype among PlayStation 4 and Xbox One players grows bigger, and fueling this hype, the developer has just released a ton of new details and screenshots showing off the exciting new features and upgrades that the upcoming action-packed open world video game will come packed with. As expected, GTA V will meet your eyes with a native resolution of 1080p and 30 frames per second on both the latest consoles, and will support 4K resolution on PC. The GTA V first-person mode will be available across all the latest platforms, and the screenshots shared below show how cool it really is. 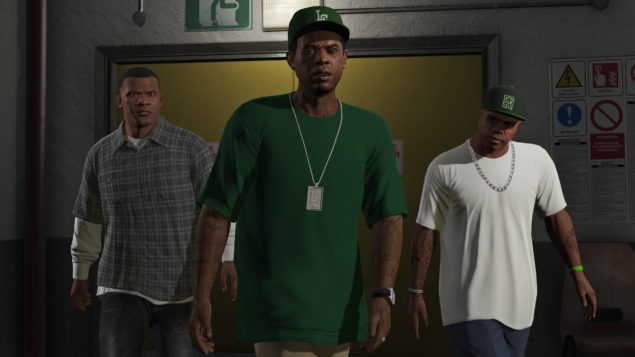 After remaining mum for quite some time, Rockstar has finally come out with a major news update regarding the remastered version of GTA V that has been embellished and upgraded for the latest consoles and PC using next-gen video game development technologies. The game, as showcased at this year’s Electronic Entertainment Expo, comes as a major improvement over its original version that was released on last-gen consoles back in 2013 and is one of the best-selling games ever. Offering completely redone environments and rich graphical textures, the upcoming game packs a lot of new stuff such as all new weapons, vehicles, activities, denser traffic, realistic wildlife and much more.

The biggest reveal in the recent news update was the brand new GTA V first-person shooter mode. Yes, the previous reports were true, and soon, players across all the latest platforms will be able to play the game as if it is a giant open-world first-person shooter where you can drive and run over random people. This new mode will be customizable and will be available both while walking around on foot and while driving, though it won’t work while taking cover during a gunfight. Rob Nelson, animation director at Rockstar Games, talked to IGN about the new first-person shooter mod and explained how it enhances the in-game experience and why it wasn’t possible on last-gen consoles. He said:

“It’s a very intense, in-your-face experience… literally. Obviously, we felt like one of the most compelling things you could do to make an experience people have had before feel different was the new first-person mode. I just think it’s a different way of experiencing the world. It’s a different perspective. You’re eye-level, down with the people on the street, and as you walk past them, you see them sort of look at you out of the corner of their eye. All of this stuff existed in the game before – lots of little details.”

“We’ve always been in interested in it, but it’s never really been an option for us. I don’t think we could’ve put it in the [last-gen version] because we were too busy making the game. We were too busy working on our third-person controls and the missions.”

Rockstar also went ahead and officially confirmed that the next-gen GTA V will run at a native resolution of 1080p and 30 frames per second on both the PlayStation 4 and Xbox One consoles. PC gamers with high-end rigs, on the other hand, will get the best visuals, as the PC version of the game will allow users to raise the resolution from the console’s max of 1080p all the way up to 4K. The first-person mode will help here too by providing players with a better view of the enhanced visuals including denser pedestrian population and traffic, realistic wildlife, and more complex weather effects. A post on Rockstar Newswire reads:

“Alongside the new First Person mode, Grand Theft Auto V for PlayStation 4, Xbox One and PC features hundreds of additions and enhancements including 1080p resolution at 30FPS on PS4 and Xbox One (4K compatible on PC)”

Along with rich graphics and textures and overall improved gameplay experience, GTA V will come packed with a bunch of little improvements including 20 new species of wildlife, 150 new songs, 32 new vehicles and more stuff. The game will hit the PlayStation 4 and Xbox One on November 18. The PC version of the game is currently being polished and will arrive early next year on January 27. Stick around for more next-gen GTA V details as they will be posted here as soon as released.