Rockstar's leading open world action-adventure video game, GTA V, brought with it an immersive persistent open world online multiplayer experience, known as GTA Online, for the PlayStation 3 and Xbox 360 players. Despite initial bugs and technical issues, GTA Online is still one of the most played multiplayer games, and looking after the in-game community, Rockstar makes sure everything is going smooth and lively by releasing frequent updates and downloadable content packs, and it looks like the upcoming downloadable content for GTA V is known as Strip Club. 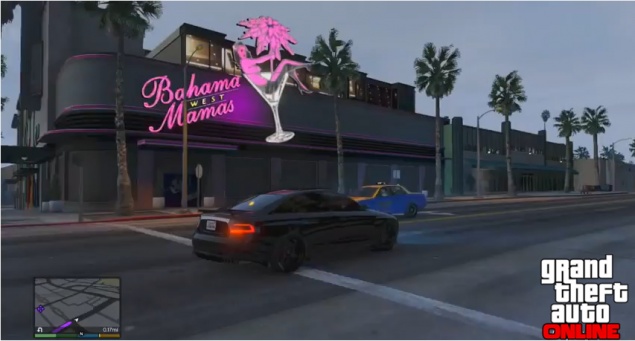 Rumors and leaks regarding the forthcoming alleged GTA V Strip Club DLC have been making rounds in the online gaming community. There are a few videos and images that reveal some interesting information about two new strip clubs that will reportedly soon be added to GTA Online. The leaks also reveal the Strip Club's secret interiors as well as the possible location details.

A YouTube fan believes that he has found two strip clubs in GTA Online that will be available once the Strip Club DLC is out. Reportedly, a code was found in the game that has given the possible location of the secret interiors for these forthcoming clubs. Looking at the video provided below, the first one seems very similar to an already accessible 24/7 strip club known as Hornbills. Both being rectangular in shape, it is suspected that they might even be of the same kind.

The second upcoming club is known as Bahama Mamas, and it looks pretty similar to the kind of clubs that are located in The Ballad of Gay Tony, where players usually go for drinking, dancing, and both. It is still unknown whether the clubs will just be like other in-game strip clubs, or will they offer new ways to socialize as well as introduce new jobs.

Some leaks also suggest that these strip clubs will be a part of the Casino DLC that will available once Rockstar launches the re-mastered version of the GTA V for PC, PlayStation 4 and Xbox One. All these leaks regarding the GTA V have originated from some game files that were leaked in GTA Online. Nevertheless, leaks are leaks and they are not to be taken as seriously until the publisher officially provides actual confirmation, so until that happens, let's just check out the video shared below.