We all already know that Rockstar's most critically acclaimed and record-breaking last-gen open world action-adventure video game was announced for PC and latest video game consoles at this year's Electronic Entertainment Expo, and that it is expected to arrive sometime in the Fall this year. What we are unaware of is the specific release date of the game, and while we can't say much about the console versions of the game, it looks like GTA V PC version is possibly set to launch on November 14.

Now that Rockstar has already announced that its long-demanded and most anticipated video game is coming to PC as well as the latest consoles in the Fall this year, all that gamers have to do is wait for the actual release date, however, as is usually the case, online retailers never let the wait time get any boring, mostly by leaking release dates of the games, and here we have it, another listing allegedly revealing the release date of GTA V PC version.

According to a pre-purchase listing of the game on a Danish online retailer called CoolShop, GTA V PC version is hitting the local markets on November 14. Now it could be placeholder only, but this date does fit within the Fall release window and it is only six weeks before Christmas, this means that the game will have plenty of time to sell before apparently the most important sales period of the year for video games ends, and that is what Rockstar would definitely want. 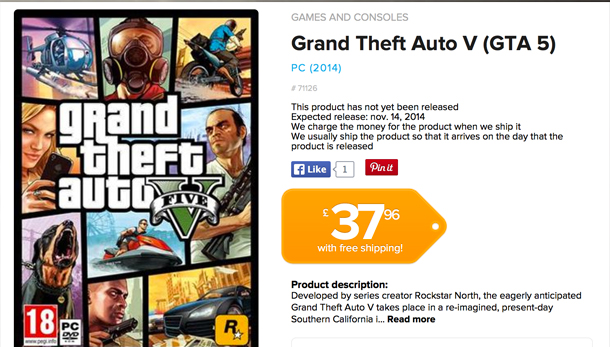 Of course this date comes from a mere listing and it can't be considered legit in any way, but whether this date is final or not, one thing that I'm pretty sure about is that the PlayStation 4 and Xbox One versions of the game will not take more than a week or two to launch after PC version, greater chances are that they might even launch before the GTA V PC version. November is a month full of triple A highly awaited games such as Far Cry 4, Call of Duty: Advanced Warfare and The Crew, but looking at where GTA V stands right now, it looks like competing with other games won't be a problem for this title.