After a bunch of leaks and rumors regarding the upcoming highly awaited update, Rockstar has finally revealed Heists – a much fun-packed feature that is already a part of the developer’s all-time famous and best-selling video game’s single player mode – for PC and console version of GTA V’s online mode known as GTA Online. Heists will be added to the online game mode early next year, and will come packed with around 20 hours of gameplay as well as new weapons, vehicles and extra items. You can check out the reveal trailer for GTA Online’s Heists below. 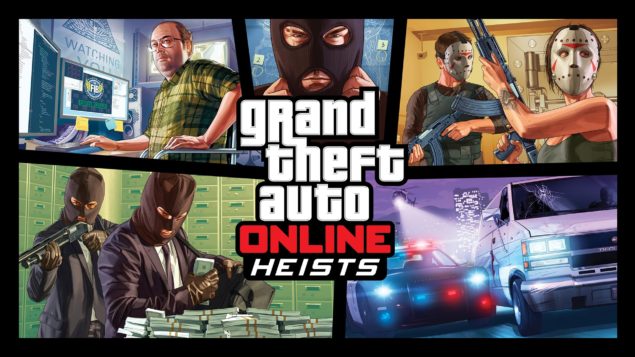 GTA V fans have waited a long time for one of the most entertaining features, which is included in the single player campaign of the game, to be added to the online multiplayer mode, and while we still don’t know about the specific release date, it has now been confirmed that Rockstar is currently working the work on Heists for GTA Online. Heists are simply new in-game jobs to keep you busy online, and give you a plausible excuse to jump back into the game and start kicking some action along with your friends and online multiplayer gamers.

Rockstar revealed in a detailed interview with IGN that Heists will arrive for GTA Online in early 2015. With around 20 hours of new gameplay split over “five unique strands” and 20 new missions in total, the GTA Online Heists update will allow players to team up in four-player co-op mode and “plan, prepare and execute multi-tiered Heists across Los Santos and Blaine County.” Along with new gameplay, vehicles, weapons, clothing and more added stuff, the upcoming update will come packed with rewards that will be handed out to players for completing all five Heists in order, as well as completing them in the new first-person mode on the latest consoles, and apparently on PC as well.

“Each heist requires 4 players all at rank 12 or above, with one player as the designated heist leader. Leading a heist requires owning a high-end apartment so that you have a room available to set up the planning board. From there you’ll be able to launch missions as the leader, starting with the prep work and building up to the score itself.”

“Being a heist leader has advantages and disadvantages. On the upside, Lester contacts the leader directly when there’s news of a job and it’s up to the leader to invite players into the crew, assign positions, pick outfits and allocate each player’s cut. On the other hand, the heist leader will need to personally front the set-up costs in order to successfully pull off the heist.”

Since Rockstar has not revealed a specific release date, so we can't say if GTA Online Heists will be ready in time for PC version of the game, which hits the local markets on January  27, 2015, but there's a possibility that the developer might release the update with the upcoming launch. You can check out the latest screenshots showing GTA Online Heists in action in the gallery below. Note that you can always click the image's title to view it in full size.