PC modding community has a done whole lot of things with Rockstar's critically acclaimed 6-year-old open world action-adventure video game called GTA 4. There is a very famous GTA 4 mod, called iCEnhancer 3.0, that can completely change the visuals and graphical effects of the game, making it look like some recently released next-gen triple A title, but this post is not about that mod, it about something rather more interesting besides all that visuals talk. Here we have a brand new GTA 4 mod that allows players to take in-game selfies. 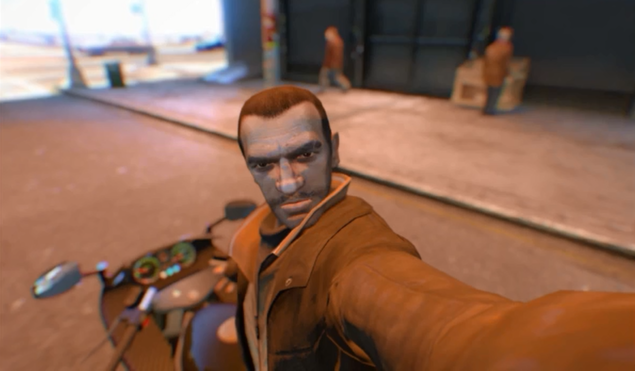 Besides some very major pro mods, we have seen several small GTA 4 mods released for PC version of the game by modders such as the mod that turns Niko, the main protagonist of the game, into a horse, or the one that adds an e-cigarette to the game, and today we have a somewhat similar one. This latest mod allows players of the game to take in-game selfies at any place, any time.

Now the characters of GTA 4, namely, Nico, Johnny and Luis will also be able to go head-to-head with the characters of GTA V in this selfie action. However, rather than using Niko's phone for taking selfies, the players will get access to a menu of commands that will allow them to select specific facial expression such as angry, surprised, or whatever, this is because the selfie GTA 4 mod is all scripted. You can check out the two video shared below, one showing the in-game selfies that were taken using GTA 4 mod, and the other showing the game running with the mod.

If you want to jump into this selfie action, you can download the mod from here and install it following the instructions provided on the mod's official info page. The mod uses OpenIV Package Installer tool and is not much difficult to install, there are also some known issues that have been pointed out here, but they are not something very serious to worry about.