Grip is a futuristic combat racing game that has competitors battle across diverse landscapes of distant worlds. Inspired by the Rollcage games of 1999 and 2000, Grip takes that heady cocktail of awesome weaponry and insane speed to a whole new level. 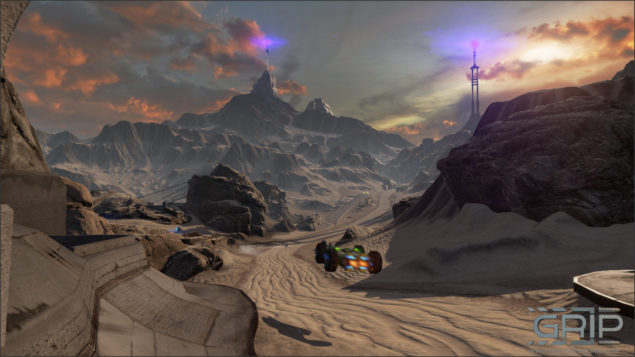 Hit speeds of up to 700 km/h while driving on floors, walls and ceilings - anything you can get your tyres on to keep the hammer down. And these brutes just want to keep on going, with GRIP's specialised vehicle design and physics, flipping the car over no longer means game over.

Race on a variety of planets. From hostile, icy worlds to foreign, non-terrestrial cities, GRIP's locations will be different to anything you've raced through before. With destructible structures around each track to use against your opponents, along with a variety of possible routes, you have to use your wits as well as your skill to win.

Choose from a roster of armoured cars, manufactured by different companies from around the galaxy. Each car has different specs - some swift and agile, others brutish and heavily armed. Then go on to customize your ride's appearance and performance with well-earned upgrades.

Use an array of power-ups and weapons, ranging from missiles and guns, to laid traps and plasma cannons. We want to create the most bombastic weapons ever seen in a game like this, and with this we welcome input from the community. You help us design them, and we'll bring them to life.

Race to a thumping soundtrack including Drum 'n, Trance, Breaks and Techno. And if somehow you don't like any of those genres, the game can be customised to play any music you like from your own personal library. Your game, experienced your way.

Oh yes. The feature that you, us, and everyone else around here has been waiting for - local and online multiplayer. Share the experience of that crazed, heat of battle there in the room with your friends with split-screen, or launch an all-out assault for supremacy online on the global leaderboards with the wider Grip community.

Career: Work your way through the Interplanetary Racing League, unlocking new tracks, cars and upgrades for your ride.

Arcade: Play a single race on any track you've unlocked with any car available and choose to include race modifiers like time of day, weather, weapons used and other options

Time Trial: Record your fastest time and race against it's ghost, or race the ghost car of anyone on the leaderboard who's recorded their run.

Multiplayer: Race over LAN or local split-screen, or take on the world by joining a race online. Matches can have a combination of human and AI players.

Grip is currently under developement for the PC and PS4 by Caged Element, with a Kickstarter campaign to launch during Summer 2015.