After GPUs, CPUs May Become The Next Go-To Hardware For Use in Cryptomining – AMD Ryzen Threadripper CPUs Can Pay For Themselves in Under a Year 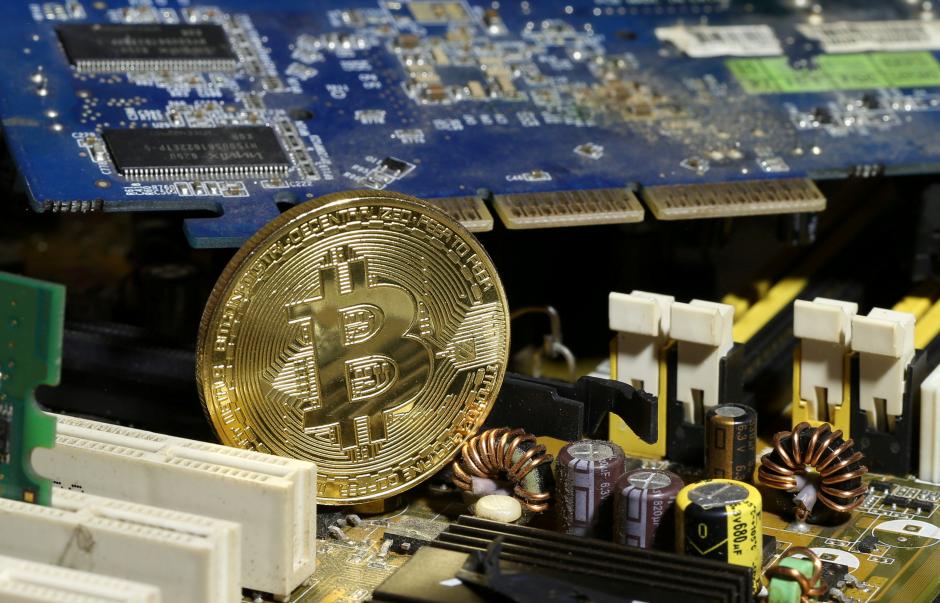 Malware that covertly mines cryptocurrency has managed to get into the top of the most wanted malware list.

Building a gaming PC has never been hard as it is nowadays and cryptomining is partially to blame for that. Gaming hardware which includes graphics cards are easily accessible and they are also very capable products to mine crpyto currencies. With the sudden jumps in crypto currency prices, a lot of people who aren't even gamers to begin with, started purchasing gaming graphics cards (AMD / NVIDIA) in a gamble to get some of that crypto cash. That however has led to a major GPU supply shortage which has affected the entire discrete graphics card market. Not only are graphics cards low in stock but those that are available are priced at insane levels with prices over twice that of their MSRP. But GPUs may not be the only PC centric hardware that may be affected in the long term as the latest study from HardOCP suggests that a powerful multi-core processor is capable of paying for itself in under a year while mining crypto.

AMD's Ryzen Threadripper Chips Used For Cryptomining, Able To Pay For Themselves in Under a Year - Could Mining Focus Shift From GPU to CPU?

2017 was an interesting year for PC hardware, we saw AMD coming back to the CPU battlefield after years of falling behind Intel, we saw NVIDIA's dominance in the GPU industry with stellar products and we also saw tons of controversies surrounding the much hyped AMD Vega GPUs and most recently, the Meltdown and Spectre CPU defect debacle which affected both Intel and AMD.

While there was a good round of hardware released during the last year, by the end of 2017 all of the best PC gaming hardware wasn't ending up in gaming PCs but rather a different niche which will soon stall the entire GPU industry. Crypto currency reached an all time high and then it fell but still it was beyond the levels it used to be earlier in 2017. PC gamers were deprived of all those nice gaming GPUs launched by AMD and NVIDIA. Even budget cards such as the GTX 1050 Ti and RX 570s are selling for $300 US+ and $650 US+ respectively which is way over their suggested MSRPs of $140 and $170 US respectively. 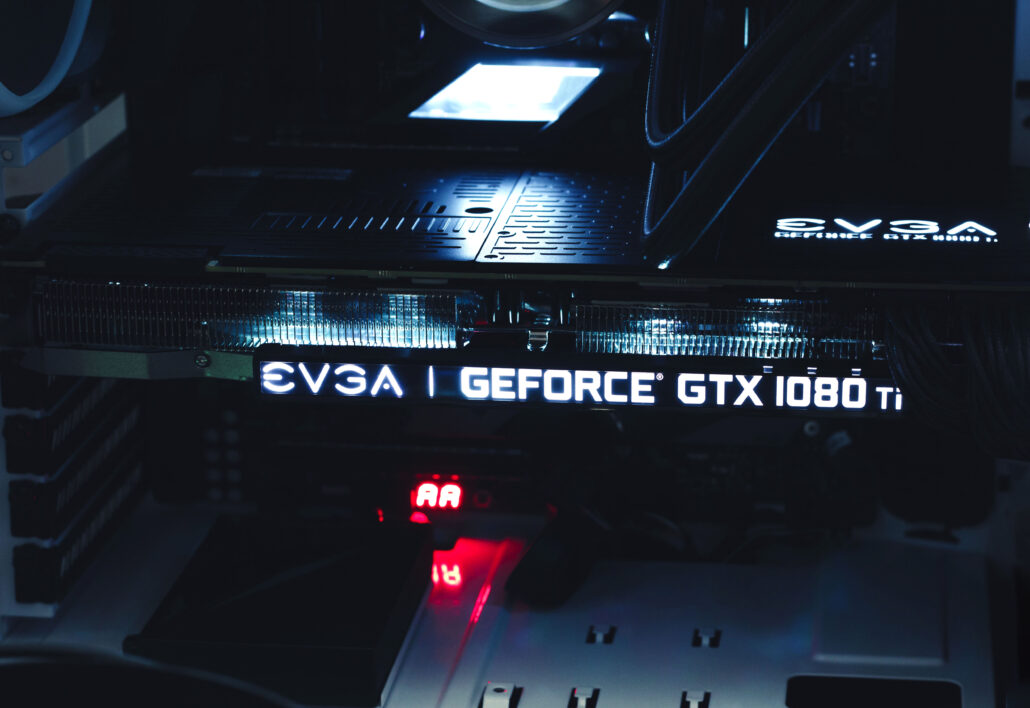 Building a gaming PC right now can be a real tough job considering the insane GPU and DRAM prices.

What makes building a gaming PC worse these days is not only are GPU prices bad but DRAM that is used for system memory in the form of DDR4 is in short supply and prices have been soaring up since mid of 2017. So gamers who want to build a PC right now cannot get either GPUs or system memory but looking forward, we may see another vital component used in PC building become difficult to get hands on based on what we are reporting today.

From HardOCP's testing, it was revealed that a single AMD Ryzen Threadripper 1950X processor is able to achieve a mining rate of 1483 Hash/s while the system power draw was at 246W. Note that the CPU was only sipping in 160W during mining whereas in Prime95, the same chip reported a power draw of up to 350W. A Threadripper 1950X and GTX 1080 combination put out 2005 Hash/s at 335 Watts.

For mining, Monero was used and it can be seen that Threadripper performed really well at mining with the CryptoNight algorithm. Based on the mining results and overall profitability, the 1950X will be able to pay for itself ($999 US) in under a year and a half but that's not the whole story.

In fact, when it comes to mining on Ryzen Threadripper, AMD has actually acknowledged it and provided more insight at how Threadripper is so efficient at mining. According to AMD's technical marketing manager, Damien Triolet, the reason that Threadripper does so well is not because it is faster than GPUs in mining, it's due to architecture suited algorithms and by that, he is referring to CryptoNight. 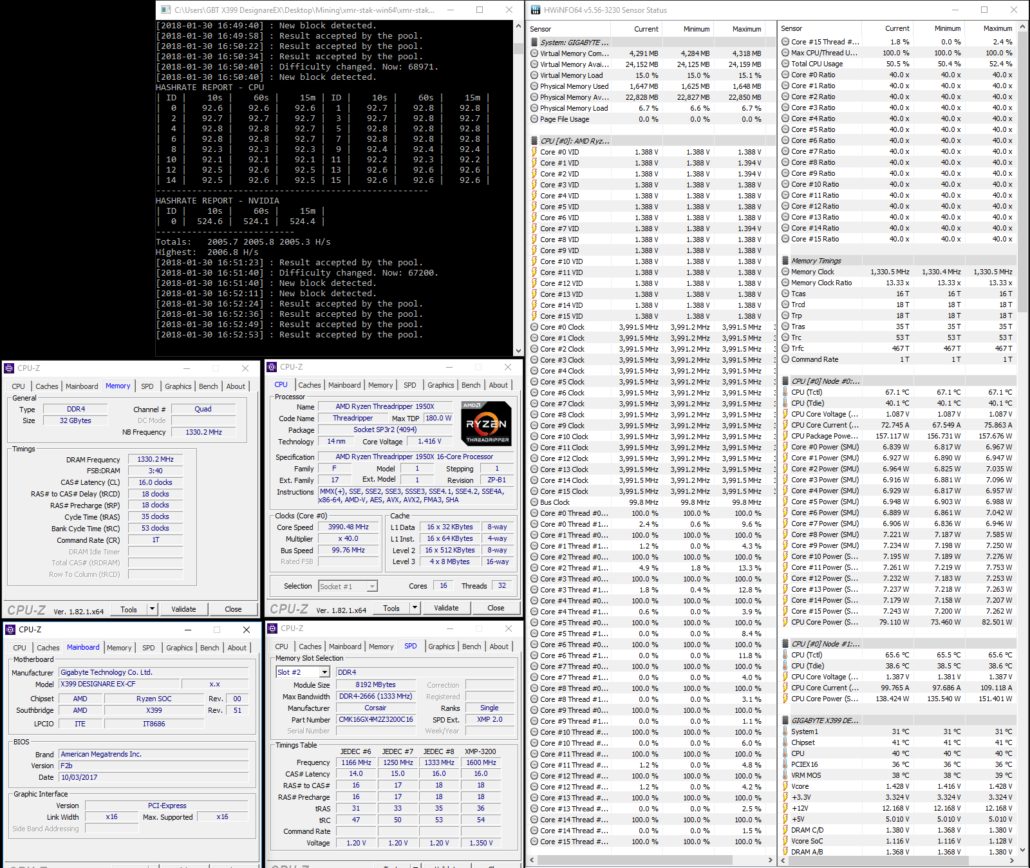 What CryptoNight does is essentially use 2 MB of L3 cache required per mining thread in use. The AMD Ryzen Threadripper 1950X and other chips have 32 MB of L3 cache available in total. This L3 cache ratio per core is what benefits the CryptoNight algorithms in delivering such a high hash rate for a CPU even.

“CPUs could be acceptable for mining if they could handle very few threads, very fast, and that’s exactly what Threadripper is able to do,” Triolet says. “The reason for that is that Threadripper comes with 32MB of L3 Cache, and it can keep the dataset in cache, which speeds up cryptomining by a lot.”

"What we want to do for the end user is that they consider mining on the side." Triolet says. "I mean not building a semi-professional mining rig but just building their usual high-end system with TR, one GPU, they can still make a nice profit on the side then, and almost pay for that platform over a year."

With the provided insight, what AMD is saying is that with home mining on a Ryzen Threadripper, you can earn almost $90 US per month through the NiceHash platform and given the current price of the chip and electricity cost, you can pay for the chip in less than a year. While CPU mining may sound fun, it's evidently more expensive than GPU based mining as a motherboard can only have one CPU at a time and you need a separate cooling solution, system memory for each mining rig assembled if you don't have one already lying around.

A GPU in comparison doesn't require a lot of components and a motherboard can support multiple of them in comparison. Furthermore, the multi-core and high cache processors come at a very high cost as Ryzen Threadripper chips start at $599 US and climb up to $999 US.

AMD on Climbing GPU Prices Due To CryptoMining:  "To be realistic, we cannot do anything about that right now“, Think Gamers a Part of Crypto Currency Problem

CPU mining may not sound as lucrative right now but given the foreseeable future that AMD has pointed out during their earnings call, it may seem to work out for some miners. According to Triolet again, they (AMD) cannot do anything about that (GPU availability issues) right now. This means that 2018 will see little change when it comes to AMD GPU prices in the market.

“For us, mining is a very dodgy topic,” Triolet says. “We could go all-in and just advertise all our products as good for mining, but at the same time there is a situation with mining that is pushing GPU prices up, and causing some availability issues on some markets. To be realistic, we cannot do anything about that right now.“

“The way to go at this point is to try to explain to end users how they can also get the benefits of mining,” Triolet says, “because if you should get a high-end desktop with a high-end GPU today and you’re not mining, you’re kind of wasting money. If they are just sitting there doing nothing, why not make some nice profit?”

AMD is saying that there is nothing they can do right now but at the same time, they are embracing the whole mining ecosystem by telling users that they can get benefits from mining with a high-end desktop or high-end GPU. AMD has historically backed mining as their products showed off good potential compared to competitors during the early days of crypto mining but recently, green team NVIDIA has also started to get hit with the mining craze as their cards have also become good and profitable in a range of crypto currencies. 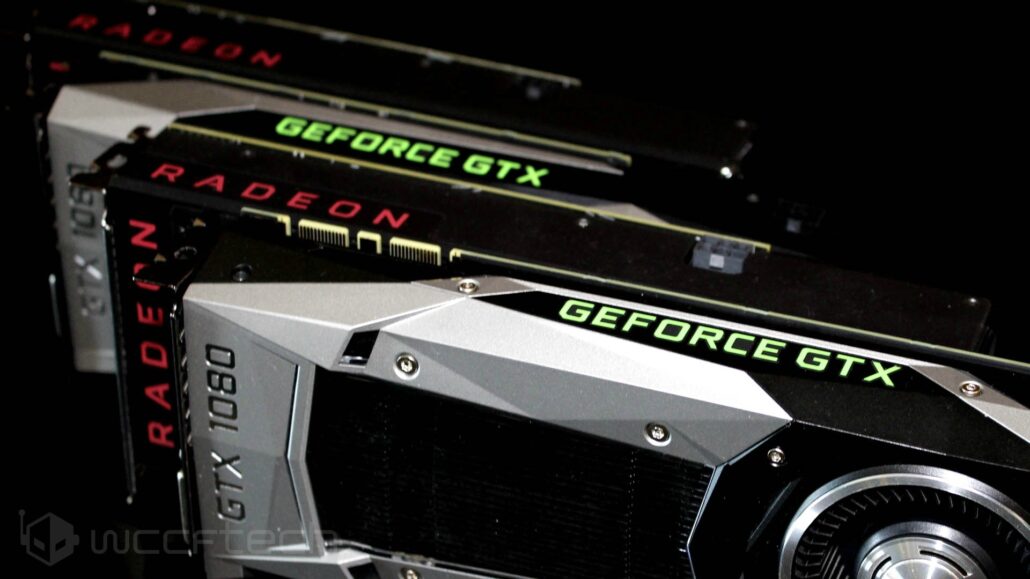 Both AMD and NVIDIA have profited from the crypto craze and their financials have shown that, but whether they could sustain this build up moving onward is the thing they should worry about right now. Recently, NVIDIA also advised retailers to market and sell PC graphics cards to gamers instead of miners, which you can read about here.