GPU Overclocking utilities have made GPU overclocking a piece of cake with the passage of time . In case you have not transcended the 'geek' world, overclocking, in layman's term is running your hardware at greater speeds than it was designed too, although it greatly increases performance, but as a side-effect, also decreases your GPU's life span. In the past GPU overclocking was extremely hard, mods were needed for the tiniest overclocks. Technology changed, and manufacturers started equipping better coolers, voltage regulator's and what not, to allow your average user to overclock easily. It was made even easier with various utilities that allow real-time overclocking, which not only was safer, but easier as well. The utilities are come in handy, allowing one to set fan speed, core GPU clock's, shader clock and various such meters to monitor the GPU.

With the passage of time, we have seen many updates regarding GPU overclocking. We have seen some great custom solution, liquid coolers and some manufacturer's even putting in entire phase change cooling on a single GPU as of recently. At the same time, we have seen NVIDIA limiting their cards to reference design as a part of their Greenlight program by removing overclocking features or limiting voltage control to their flagship graphic parts. This stirred up alot of heat in the GPU industry but with time many consumers settled with the new program. The Greenlight program is the reason due to which we haven't seen any GeForce GTX Titan, GeForce GTX 690 GPU in non-reference or custom variants. NVIDIA also limited manufacturer's to offer their own custom dual chip offering which ended up the ASUS MARS III GPU getting cancelled as a showcase product only and the plans to another card under the ASUS MARS brand with dual GK110 cores getting washed out. AMD on the other hand still allows manufacturer's to release any cards as they wish which was the reason we saw TUL made HD 7990's before the launch of the official reference variant codenamed "Malta" in 2013.

Following up on our previous record, we will again revisit the accord and see some of the great overclocking utilities, manufacturers pack.

You can check out our previous GPU Overclocking Utilities article here!

Believe it or not, AMD has it’s own overclocking. As it say’s, the utility is especially designed for AMD GPU’s and features overclocking. Suffice to say, it fulfills one’s basic need for overclocking, but if you’re gonna go ‘geek, all over it, then we’ll suggest otherwise. The utility features Core/Memory clock adjustments along with little control over voltages and manual fan speed control. It includes your usual monitoring stuff, and features an easy-to-use tabbed design.

The utility also includes a stability test, benchmark and AMD’s Smart Profiles. OverDrive is also the easiest way to disable Cool and Quiet downclocking technology when you're looking for consistent performance or high clockspeed stability. 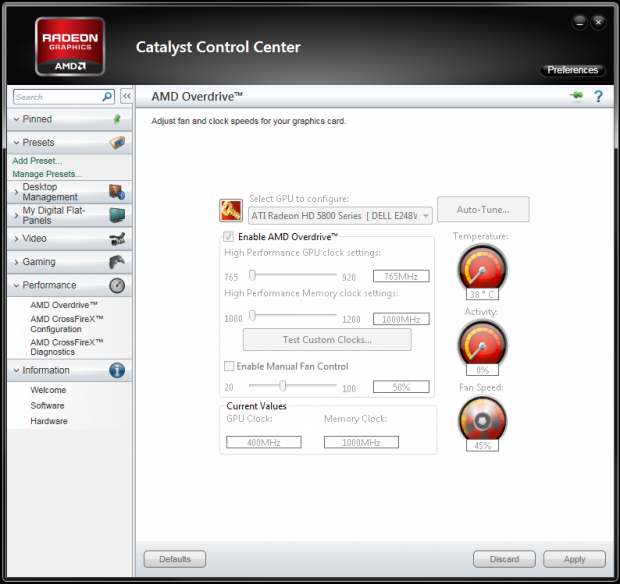 You can download the latest version of AMD's Overdrive utility here.

Gainward EXPERTOOL - Built For The Experts

Popular manufacturer Gainward also have their very own overclocking utility exclusive to Nvidia GeForce GPU’s. The ‘Expertool’ has all your basic overclocking options including core clock, GPU voltages, fans speeds, power target and memory clock. The utility can save up to 5 custom profiles and features a quite ‘different’ layout.

It looks very similar to a car speedometer, with dials showing core clock and memory clock. It has all the necessary monitoring functions that can be accessed through the status tab, which include GPU temperature and fan speeds. The information tab is self-explanatory and includes all necessary info about the GPU. Gainward’s Expertool may get the job done, but it still needs a lot of polishing to stand against it’s competition. 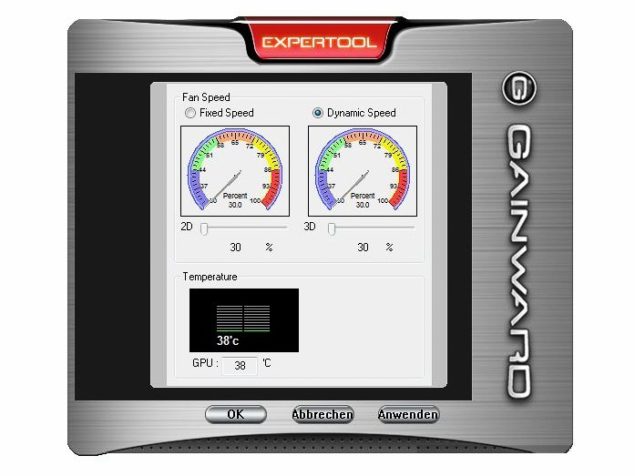 You can download the latest version of Gainward's Expert Tool utility here.

Sapphire has their own handy overclocking utility, exclusive to AMD graphics cards. The ‘TriXX’ utility, as Sapphire likes to call it fulfills the basic need of every overclocker, although it is still not as advanced as it’s counterparts. The utility offers adjustments to the fan speeds, core voltages and clock speeds. You can set up to four custom profiles, certain overclocking parameters also guarantee maximum performance out of the card. For instance, the utility will maximize the overclocking in the gaming mode, but will reduce clock speeds and fan speed to optimal level when watching videos.

The utility has a very simplistic design, it’s divided into multiple tabs, each with it’s own set of functions. TriXX can also create a log file for future analysis, and the user can save the current VGA BIOS. TriXX also has a neat sidebar gadget option, which is unique in it’s own right but it doesn't make up for the some of the features absent in the utility. Like many others, TriXX can also be customized via custom skins. 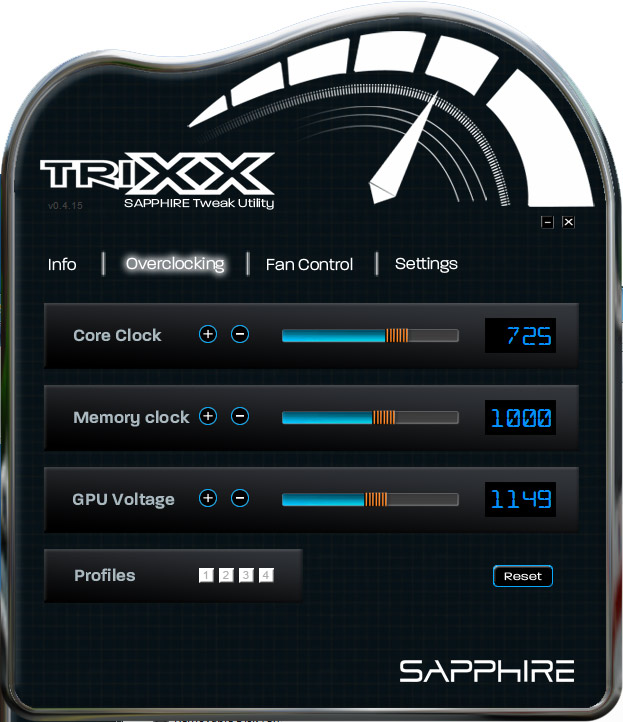 You can download the latest version of Sapphire's Trix utility here.

Zotac released their 'Firestorm' GPU overclocking utility not so long ago. The software features a simplistic design and all the basic overclocking options such as Core, Memory, Shader Clocks, Fan speed and Voltage adjustment. Additionally, the software also features custom overclocking profiles, fail-safe in the case of a failed overclock, power limit control, temperature limit control and Nvidia SLI overclocking capability. Instead of separate side-panel for monitoring like many others, the Zotac Firestorm has individual tabs for individual activities. It's a nice little utility for the owners of Zotac GeForce graphics. Unfortunately for the masses, it only supports Nvidia GPU's.

You can download the latest version of Zotac's Firestorm utility here.

Gigabyte's OC Guru II has been around for quite some time, the overclocking tool was consistently behind the competition in terms of functionality, features and stability, but with the launch of OC Guru II, things are taking a turn for the better. Gigabyte has tremendously improved their overclocking utility. It's easy to use and features a very intuitive design. The individual page design is great and features all the necessary things needed. The utility allows for control of clock speed, memory, voltage, fan speeds etc. Gigabyte may give give control over many features but have locked some too. For instance, only memory voltage can be controlled, while core voltage is locked and determined by Gigabyte to be set for the safest possible value.

You can download the latest version of Gigabyte's OC Guru II utility here.

GPU Tweak allows for setting up of up to four custom profiles. 'S' and 'G' buttons allow for reverting to manufacturer set default settings, while the latter enables a slightly higher clock speed on the GPU. The utility allows to change between 2D/3D mode depending on the work load. You can even fix it to a certain mode. Also present is a GPU-Z type information center. You can activate it by clicking the info button. Additionally GPU Tweak also allows you to update your BIOS and GPU driver automatically. 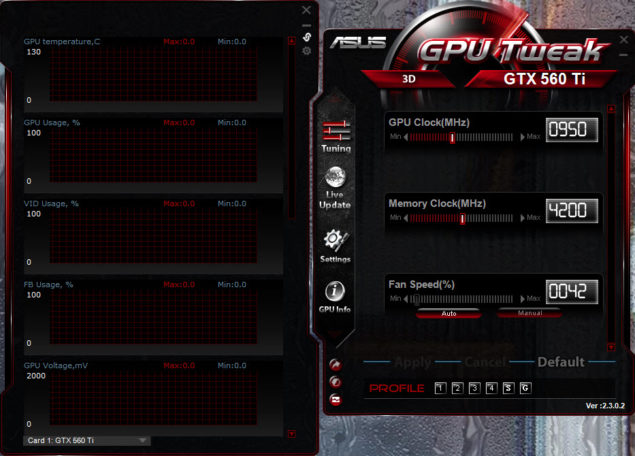 You can download the latest version of ASUS's GPU Tweak utility here.

Additional features include for Logitech keyboard LCD display monitoring, in-Game GPU monitoring support, ability to to capture in-game screenshots in multiple formats, support for wireless overclocking using the custom Android app and multi-language support. The software also sports the ability to apply different skins, you can even make your own custom skin.  In terms of features, the Precision X stands out, being the most perk-full. 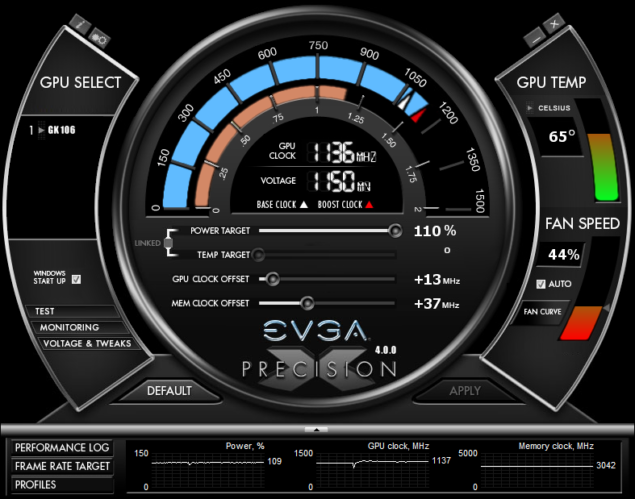 You can download the latest version of EVGA's Precision X utility here.

MSI's Afterburner is the most well known and the most popular GPU overclocking utility around. The utility has a simplistic design. It features real-time overclocking, and supports both Nvidia and AMD. The utility features Core voltage, Power limit, Core clock, memory clock and fan speed adjustment. A separate panel for monitoring is also present, it includes temperature monitoring, fan RPM, GPU usage, Core clock, Memory clock, Shader clock and memory usage monitoring. Up to five custom overclocking profiles can be setup, and you can also change the utility's theme from a variety of different colors. Like ASUS's GPU Tweak, it also allows you to change between 2D/3D modes.

Additionally, the utility also includes MSI's Kombuster, which ensures if your card is stable at different overclocks. It also shows if unstable clocks or higher temperature are causing artifacts to appear. The utility also allows to capture in-game screenshots and video capture in a number of formats.

You can download the latest version of MSI's Afterburner utility here.

How to Speed up Your Internet on Windows 11