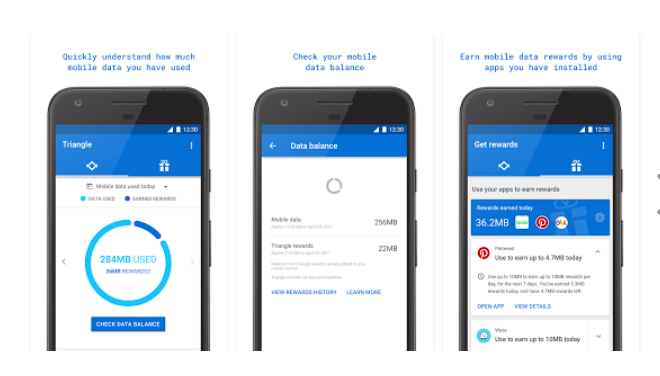 Worried about data consumption on your smartphone? Sweat not, Google has got you covered. The tech giant has launched a new Triangle app that is being tested in the Philippines for now.

Google's new app is aimed at saving your mobile data by limiting the background consumption. As we mentioned above, the app is currently available in the Philippines only, so it is only compatible with Globe and Smart prepaid users. Google has made this app for the regions where data consumption is a big deal and users yearn for proper data utilisation.

The Triangle app by Google calculates your current data usage, which also includes data balance. It uses a feature known as Data Saver to block unwanted data usage. Users can block individual apps through the app and also set a specific time frame for the apps to use, ranging from 10 minutes to 30 minutes. After the time passes, the app goes back to consuming normal data without any restriction.

In its current form, the app allows Globe and Smart prepaid users to use apps on low data consumption. The app also offers 100MB free data as a joining gift to users in the Philippines, but they gotta register first. The Triangle app listing reads,"Get the most out of your mobile data pack. Triangle is a new app being tried out in the Philippines that helps you better manage your data usage and block unwanted background data."

We can expect Google to release the app for a wider audience soon as every user would be interested in having a dedicated app to control data usage. There are other third-party apps that promise similar functioning and cap on the data usage, but we don't think they work that well. A dedicated app from Google would any day work better for limiting data consumption.

If you are in the Philipines, then you can head to the Play Store and download the app. And if you are in the other regions then also you can test the app via APK mirror.