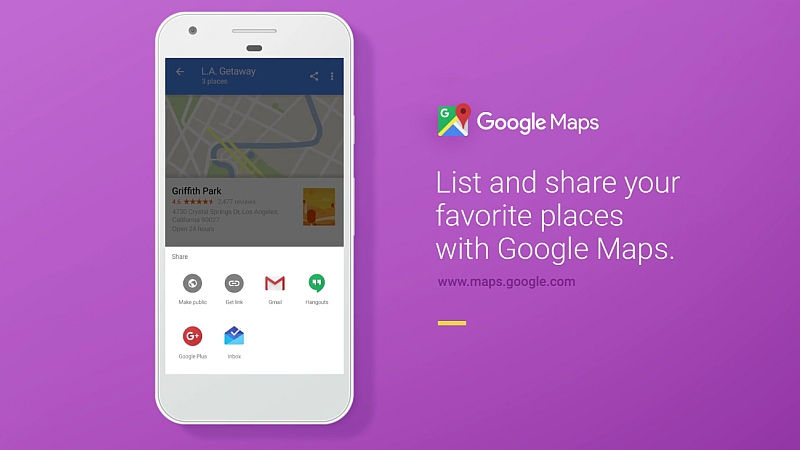 Google has started rolling out a new feature to Google Maps app for both iOS and Android. This new feature would enable users to make a list of places, and it can be starred, saved, and shared with friends. Further, there are already three different types of built-in lists - “Favorites,” “Starred Places,” and “Want to Go,” these could guide users to select a location based on preferences. Also, users can also make their customized list based on a handpicked selection of places.

Google had been testing this feature for long and it wants Google Maps to become a social platform wherein users can share their preferences and experience about places. By sharing location lists, users will be part of a more personal interface that brings a sense of community.

"Getting started is easy. Simply open the Google Maps app and find that BBQ spot you’ve wanted to try. Tapping on the place name and then the “Save” icon adds the place to one of the several pre-set lists like “Want to Go” or “Favorites.” You can also add the restaurant to a new list that you name yourself, like “Finger Lickin’ BBQ.” To recall the lists you’ve created, go to Your Places (in the side menu) and then open the saved tab. Icons for the places you’ve saved to lists will appear on the map itself, so you’ll always know whether one of your must-try BBQ spots is nearby."

This feature could prove to be pretty useful for the people who like to explore the city and famous landmarks. With this new feature on maps, they can mark the location and put it under any of the preferred categories - Favorites, Starred Places, and Want to Go. It can also help in marking the non-famous places that you would like visit later. Earlier, in the testing phase of this feature, users were only allowed to create a list, but from today Google has rolled out the sharing functionality as well.

To make your list public, you just have to make it "discoverable" by going to the settings menu. This way, general users would be able to find your list and visit places marked by you. For now, Google has not got under any partnerships to promote the new feature on Google Maps, but it is open to possibilities. Going by the functionality of this new feature, Google Maps will now rival Foursquare, which offers same information to users.

The new feature is currently being rolled out to Google Maps app on iOS and Android. For now, users will be able to view the public lists on the app only, but Google will soon make it viewable on the web and other platforms.