If you've been using Google Translate on Windows or Android application or have difficulties in typing in your language on the Latin/English keyboard, Google is here to help you. The Search giant recently released what I would say, the biggest move towards localisation and native language support. The Google Input Tools.

After launching Google Translate back in 2010, Google has come a long way with users posting Terabytes of translation data to its servers everyday. Making use of all its experience, Google has now on offer an input method that is so precise, its unbelievable. You wouldn't need a non-Latin keyboard, ever.

The Google Input Tools is presently available on the two most used platforms in the world, aka Android for mobiles and Windows for the PC. It is also available as an extension for Google Chrome.

The Windows version is a transliteration version for 22 languages at present. It installs like a keyboard language, and can be switched using the Windows + Space combination. For example, If I had to type "How are you" in Hindi, which is written as Aap kaise hain on a Latin keyboard, I simply have to type aap kaise hain to get "आप कैसे हैं". Isn't that awesome? 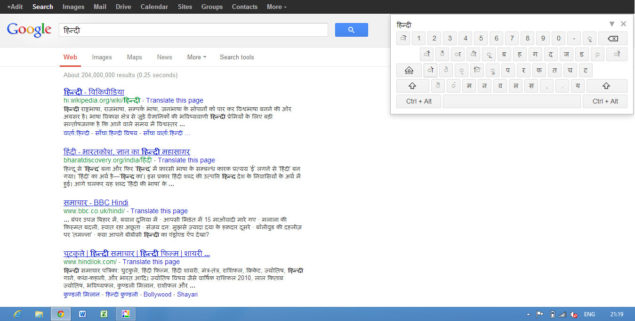 A screenshot for Google Input Tools in Hindi Language.

The Chrome extensions offers a switch to typing in a different language with the click of the mouse, and switch back just as easily. The Google Input Tools extension provides virtual on screen keyboards for over 90 languages, full IMEs or direct transliteration for over 30 different scripts, and handwriting input for over 40 languages.

All keyboard versions are fairly accurate, and also adapt to your custom dictionary as your usage increases. A key point to note is that its not a translation keyboard. You need to phonetically type in your language and leave the rest to the keyboard.

The Google Input Tools are a gift if you've been wanting to write in your language but were not well versed with the native keyboard layouts.After almost a week's usage on both a Windows 8 laptop and an Android phone, I can easily confirm that the keyboard is very accurate and gets acquainted to your diction quickly. Apart from some extremely complicated words, I wasn't ever disappointed by the keyboard.