If Apple can take online media outlets by storm at it's annual Worldwide Developers Conference, be sure that the folks at Mountain View execute a blow by blow retaliation. Google's annual I/O brought in a number of announcements from the internet search giant. Another interesting one came today as Google Chrome for iPad, iPhone and iPod touch was finally made available to the public. iOS version of this popular internet browser is now available for download from the App Store. 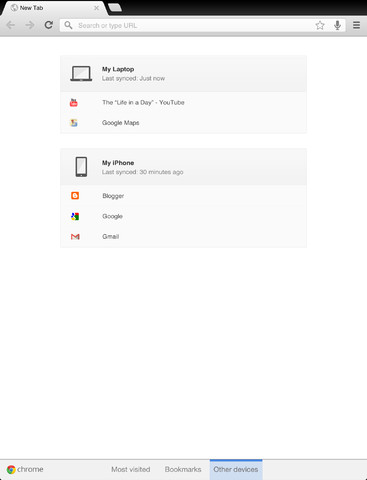 Mobile Safari on iOS devices has been greatly improved ever since it was first introduced with the original iPhone back in 2007. Apple dubbed it as a breakthrough internet communicator in your pocket. Since then mobile Safari has received major upgrades, the biggest coming with iOS 5 late last year. While Safari does offer an amazing web browsing experience, there is no shortage of third party web browsers for iOS devices. Web browsers the likes of Opera and Dolphin are already available, though something tells me Google Chrome for iOS will garner more consumer interest than it's rivals, notwithstanding mobile Safari of course.

Google Chrome is perhaps one of the most used browsers on laptops, desktops and Android devices around the globe. It is famous for it's simplicity and speed. It's good to see that these fundamentals have been retained in the iOS version of Google Chrome. The browser is no slouch in terms of performance. It also offers full synchronization of data and Google account services across devices that are linked to a singular Google account. For those who like to surf in the dark comforts of the night and their beds, Google Chrome for iPad, iPhone and iPod touch features Incognito Mode. Tabbed browsing is also a welcome addition to the overall suite of features.

Google Chrome for iOS is available as a universal binary and is obviously a free download. Only pre-requisites include being in possession of an iOS device capable of running iOS 4.3 firmware or higher. You can download Google Chrome for iPad, iPhone and iPod touch right now from the App Store.