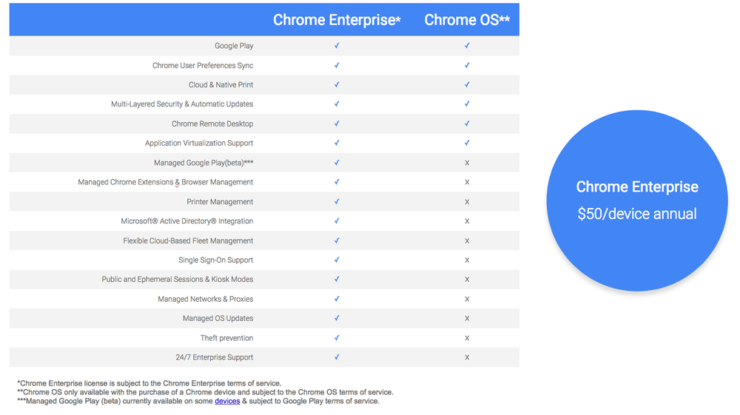 In the past several years, Chromebooks have been making visible space in the education arena. Now, Google wants to apply the same strategy to corporate businesses by launching an all new Chrome Enterprise subscription service. With this service, Google is aiming at increasing the overall adoption of Chrome OS among large companies.

In plain words, Chrome Enterprise is a spinoff of Chromebooks for Work program. It is a rebranded version loaded with enhanced functionalities that were previously absent on Chromebooks and hence acted as barriers to industry adoption.

Google has priced the new service at $50 a device per year. One subscription comes with several new features over basic Chrome OS. With Chrome Enterprise, administrators will have better authority over the management of Chrome extensions, Google Play Store, printers, and OS updates. Businesses will also be able to create a customised app store for their employees.

Among the biggest additions to the new service, Chrome Enterprise is compatible with VMware Workspace ONE and Microsoft Active Directory. It means that existing login credentials can be used to sign into Chromebooks and access Google services. Admins will also be able to access their old system to manage devices.

VMware Workspace ONE powered by VMware AirWatch will be the first third party solution provider to manage Chrome devices. Workspace ONE will provide a centralized approach to managing corporate-owned or bring-your-own device. This collaboration combines the speed, simplicity and security of Chrome with the cloud-based unified endpoint management of VMware AirWatch.

If you're interested in Chrome Enterprise, then Google has invited interested users to take part in a webinar on August 23 and ask live questions.