Goat Simulator Leaping to Xbox One and 360

This may not excite many people out there. But then again, Goat Simulator has an almost cult-like following on the PC. Regardless, the simulator based off of the Capra aegagrus hircus is now making the leap over to the Xbox One and the Xbox 360 to be enjoyed in all its glory via the big screen, for those that don't have your PC hooked up to a big screen at least. 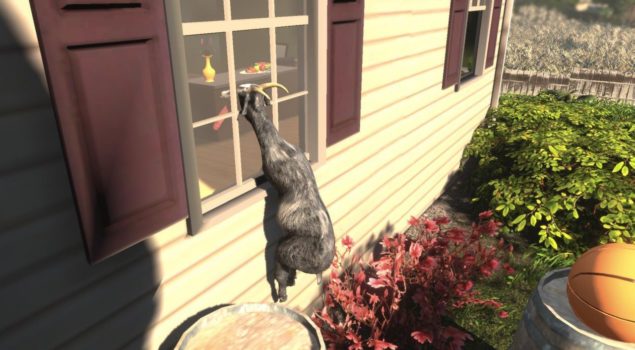 A newly posted YouTube video from the Xbox crew has given word that Goat Simulator is indeed heading to the Xbox consoles in April.

Regardless of how you may feel about probably the silliest game ever made, it was a commercial success. 2.5 million copies of the billie goat simulator have been sold since it was released in 2014. That's nearly $54 billion USD earned. That's right, billion. What may seem like a silly, nay stupid, game is actually one of the best ideas ever. Certainly it's been quite the profitable idea for its creators,.

Who doesn't want to prance around as a goat and just, well, do stuff. Do goat stuff. Head butt things and eat things. The premise is surprisingly (or not so surprisingly) simple, but the actual fun factor is quite high. If you've never played it, don't knock it until you try it. It's one of those surprise games. I still can't get over the hilarious disclaimer they have on their website either.

Goat Simulator is a small, broken and stupid game. It was made in a couple of weeks so don’t expect a game in the size and scope of GTA with goats. In fact, you’re better off not expecting anything at all actually. To be completely honest, it would be best if you’d spend your $10 on a hula hoop, a pile of bricks, or maybe a real-life goat.

If you've been waiting for Goat Simulator to transition to the console space, then wait no more. Goat Simulator has a been set April to be released. No specific date has been given, though April 1st is apparently the one-year anniversary for the release of Goat Simulator, so that might be when it gets released.