The 12nm fully depleted silicon on insulator process technology dubbed 12FDX is only the second of its kind and the direct successor to Globalfoundries' 22FDX technology. 12FDX promises to deliver 10nm FinFET performance with better power consumption and lower cost than 16nm FinFET. Furthermore, it achieves that while maintaining great versatility. The node is compatible with radio frequency, analog, embedded memory, and advanced logic circuits.

GLOBALFOUNDRIES’ new 12FDX technology is built on a 12nm fully-depleted silicon-on-insulator (FD-SOI) platform, enabling the performance of 10nm FinFET with better power consumption and lower cost than 16nm FinFET. The platform offers a full node of scaling benefit, delivering a 15 percent performance boost over today’s FinFET technologies and as much as 50 percent lower power consumption.

Silicon On Insulator technology has been a favorite of IBM and AMD for a very long time. Primarily thanks to its superior frequency scaling and power characteristics compared to standard bulk technology. IBM introduced its first ever product leveraging SOI back in 2000 in its "Istar" PowerPC-AS CPU. 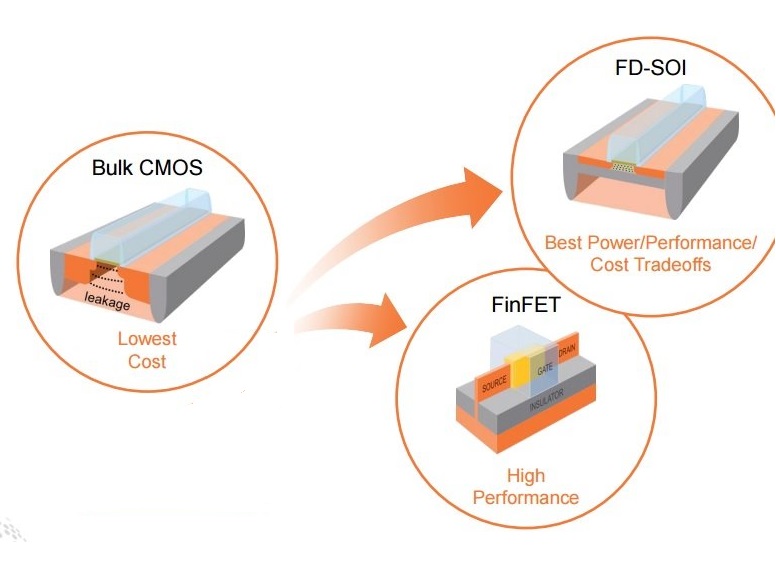 AMD followed suit the next year with its own range of processors leveraging SOI on the 130nm node. The company then continued to leverage the technology with its 90nm, 65nm, 45nm and 32nm nodes. That is up until it spun off its manufacturing arm to then later become Globalfoundries.

Globalfoundries acquired IBM's manufacturing business last year, adding on to the AMD SOI technology heritage at the company. Fully Depleted SOI is an even more advanced implementation of the technology that delivers even higher performance at lower power.

FinFET and SOI are not mutually exclusive. In fact it is believed that Globalfoundries next generation 14nm technology, code named 14HP,  and the successor to its current 14LPP node will leverage both FinFETs and SOI. Which if it ever comes to fruition will make it the first in the world to do so. It would certainly make it one of the best performing process technologies there is. 14HP is an independently developed 14nm manufacturing process by Globalfoundries' in contrast to 14LPP which the company licensed from Samsung a couple of years back.

The keen observers among you will point out that a transition from 14nm to 12nm isn't as dramatic as has been the occasion for the past several years. That's because 12FDX isn't succeeding Globalfoundries 14nm FinFET process, It's replacing 22FDX. Succeeding 14nm FinFET will be 7nm FinFET, a node which the company expects to be fully operational by 2020. The company plans to offer both 7nm FinFET and 12FDX technologies simultaneously to address different areas of the market. Where 12FDX's true advantages lie are cost and simplicity, two things that FinFET's design complexity and high expense really cannot contend with.

Fab 1 in Dresden, Germany is being equipped to begin trial production of 12FDX and subsequent volume ramp and mass production in 2019 upon product tape out in the first half of the very same year.