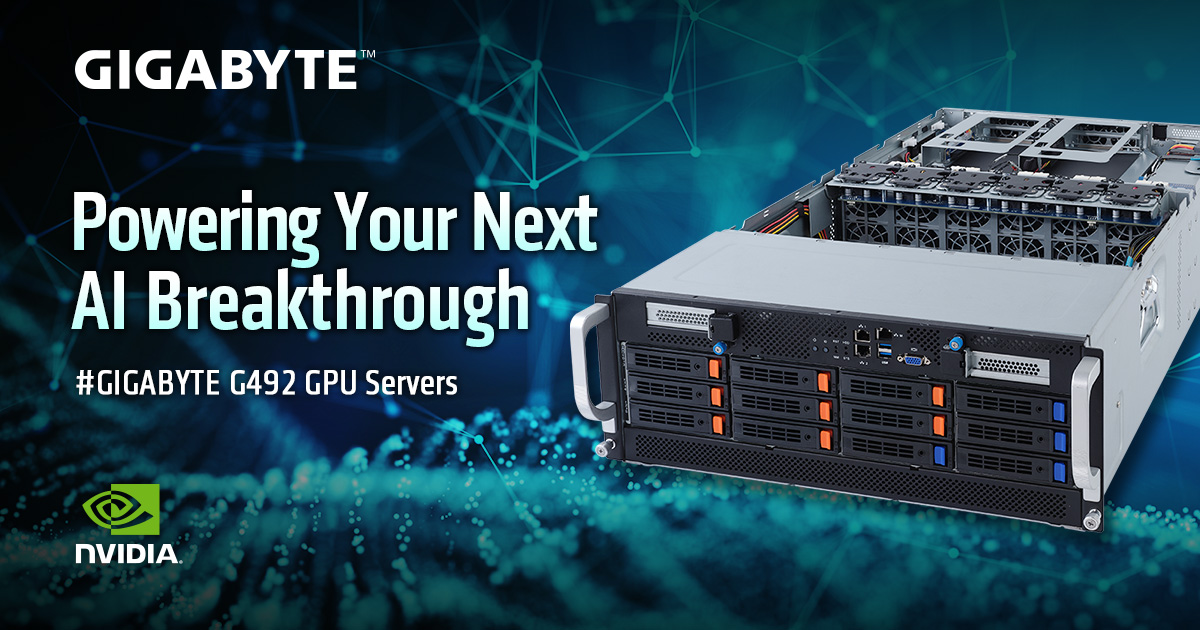 Following the NVIDIA A100 PCIe GPU announcement today, GIGABYTE has completed the compatibility validation of the G481-HA0 / G292-Z40 and added the NVIDIA A100 to the support list for these two servers. The remaining G-series servers will be divided into two waves to complete their respective compatibility tests soon. At the same time, GIGABYTE also launched a new G492 series server based on the AMD EPYC 7002 processor family, which provides PCIe Gen4 support for up to 10 NVIDIA A100 PCIe GPUs.

The G492 is a server with the highest computing power for AI models training on the market today. GIGABYTE will offer two SKUs for the G492. The G492-Z50 will be at a more approachable price point, whereas the G492-Z51 will be geared towards higher performance.

The G492 is GIGABYTE's second-generation 4U G-series server. Based on the first generation G481 (Intel architecture) / G482 (AMD architecture) servers, the user-friendly design and scalability have been further optimized. In addition to supporting two 280W 2nd Gen AMD EPYC 7002 processors, the 32 DDR4 memory slots support up to 8TB of memory and maintain data transmission at 3200MHz. The G492 has built-in PCIe Gen4 switches, which can provide more PCIe Gen4 lanes. PCIe Gen4 has twice the I/O performance of PCIe Gen3 and fully enables the computing power of the NVIDIA A100 Tensor Core GPU, or it can be applied to PCIe storage to help provide a storage upgrade path that is native to the G492.

With NVIDIA GPU acceleration becoming the mainstream technology in data centers, scientists, researchers, and engineers are committed to using GPU-accelerated HPC and AI to meet the important challenges of today’s world. According to NVIDIA, the A100 Tensor Core GPU has delivered the highest performance leap compared to previous generations. The A100 PCIe GPU also maintains the same 250W TDP profile and mechanical design as the previous generation V100 GPU, yet increases the HBM2 memory capacity to 40GB. Without changing the code, the speed of using TensorFloat-32 (TF32) for AI model training is six times the performance of the V100. The NVIDIA A100 can handle AI model processing that is maturing and rapidly increasing in both size and complexity.

Upgraded To PCIe Gen4 To Support The New A100 GPUs

The G492 is well designed to support NVIDIA A100 PCIe GPUs. Considering A100 GPU usage, GIGABYTE has built PCIe Gen4 switches in the system to provide high-speed PCIe mesh networks to support GPUDirect peer-to-peer (P2P) communications between GPUs and RDMA technology to parallel and even larger computing cluster. Through GPUDirect P2P, each GPU can directly access the memory of other GPUs through the PCIe bus, thereby avoiding the transfer of data to the server’s system memory and reducing the delay of data exchange. Taking deep learning as an example, famous open-source deep learning frameworks, such as TensorFlow and MXNet, provide support for GPUDirect P2P, and the NVIDIA Collective Communication Library (NCCL) is also optimized for GPUDirect P2P.

The expansion of PCIe Gen4 lanes through the PCIe Gen4 switches also makes the expandability of the G492 much higher than previous G481 / G482 servers. In addition to containing 10 dual-slot A100 GPUs in the chassis, three PCIe x16 slots and one OCP 3.0 slot are reserved on the front and rear of the chassis, providing users with an additional four add-on card upgrade options for SAS cards or NVIDIA Mellanox InfiniBand cards.

Low cost to performance ratio and flexibility are the main product appeals of the G492. The G492 series servers provide high flexibility for users to configure on their own and expand the computing capability based on demand. GIGABYTE will soon expand its NGC-Ready systems offering with NVIDIA A100 GPUs. The NGC-Ready systems are built for AI applications and are tested for functionality and performance of deep learning and machine learning workloads, using GPU-optimized software from NVIDIA’s NGC registry. NGC-Ready systems give administrators the confidence to deploy the infrastructure required to run AI applications.

In terms of storage configuration, the G492 can be equipped with 12 3.5” or 2.5” hard drives. The backplane board supports SATA / SAS / NVMe protocols; therefore, in addition to large clusters, the G492 is also suitable for the infrastructure of enterprises or research laboratories that must keep their data safe. The G492 and NVIDIA A100 PCIe GPUs can provide revolutionary computing power for AI usages of all sizes, accelerate workloads of all sizes, and help customers reduce time to market for their services.