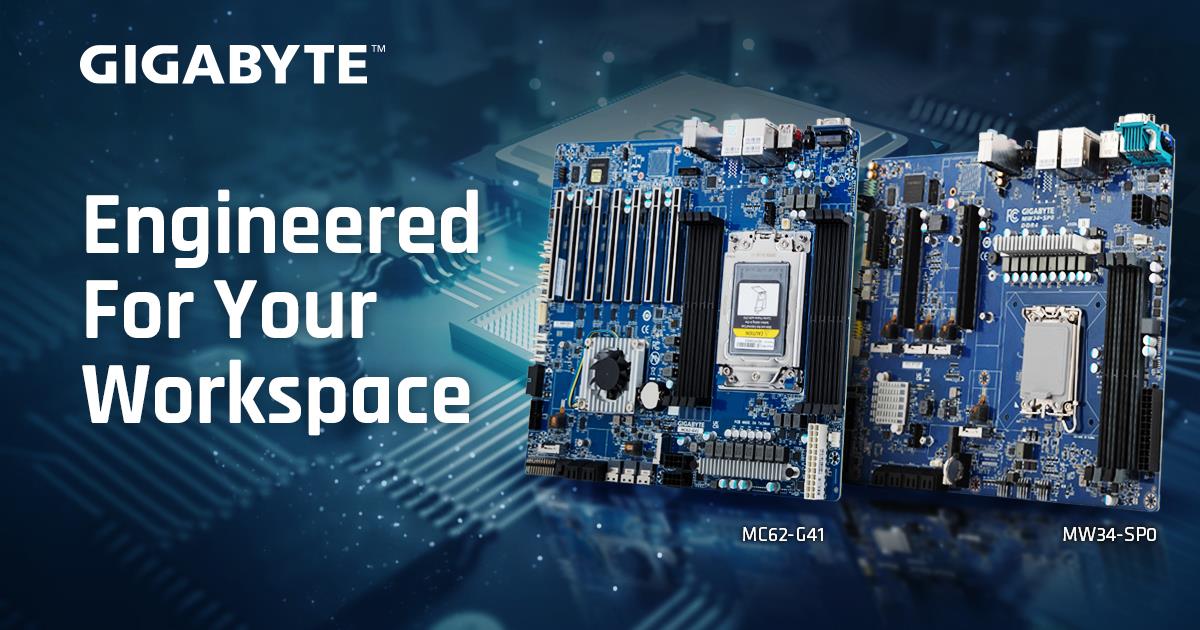 Gigabyte's focus for the two newest motherboards is on users requiring much power and performance, along with specialists who need entry to both server and business-lined features. The new MW34-SP0 is an Intel-based workstation motherboard utilized by the most recent W680 chipset. The MC62-G41 is the AMD Threadripper-based motherboard, controlled by the latest WRX80 chipset. Both motherboards offer extra elements and unique connectivity arrangements not generally seen in consumer markets. The MW34-SP0 is one of the first workstation motherboards designed to fit Intel's new 12th Gen Alder Lake parts. On the surface, this board has a very similar feature set to Gigabyte's consumer-friendly Z690 series. But when you look deeper, Gigabyte added a host of new features on this workstation board that has been brought over from the server industry.

A monitoring application to monitor the RAID adapters connected to the system. Features Gigabyte included pm, the new Gigabyte management console — an application that allows the user control of the interface for the specific system it is running — consists of the monitoring and management of the health of the primary system, running in a graphical interface through means of a web browser, permitting admission to the remote console. Other options include support for an Intelligent Platform Management Interface, or IPMI, a separate device that enables the user to access the host machine and BIOS remotely.

The back of the motherboard is sparse when it comes to I/O connections, especially when lined up with the Gigabyte Z690 boards. The options available are two LAN connections (one for the 2.5 GB Ethernet connector), three audio ports, and four USB 3.2 ports (one set for a USB Type-C connection). Lastly, Gigabyte offers an HDMI, DisplayPort, and VGA port for video ports.

Do not expect to utilize DDR5 memory because the MW34-SP0 workstation motherboard only supports DDR4 memory technology, with upwards of 3200 MHz supported by the manufacturer for non-ECC and ECC options. What is surprising is that the company allows for the processor to be overclocked along with the memory due to the W680 chip. For those users that need premium speed from their memory or stress the cores of the CPU, this motherboard can be very beneficial.

Gigabyte's MC62-G41 increases the capabilities for users by offering a compact electronics bay specification, or CEB, a design that measures 305mm x 267mm, which is quite significant compared to other motherboards. The MC62-G41 is ensured to bring power to the 154 PCIe Gen 4 lanes offered from both the WRX80 chipset and the soon-to-be-released AMD Threadripper 5000 Pro processor. Finally, this motherboard has seven PCIe 4.0 x 16 slots — one separated for the eight slots and the remaining for the configured PCIe 4.0 slots.

Again, Gigabyte decided not to offer DDR4 compatibility and only supplied eight DDR4 slots surrounding the sWRX8 processor socket. Each DDR4 supports as many as 3200 MHz DIMMs and ECC DIMMs. The maximum memory capacity for the MC62-G41 is 2 TB. The company also scrimped on additional rear ports for input and output, as well as for storage. Two slots support M.2 NVMe and SATA 3 drives, and four SATA 3 ports offer compatibility for both 2.5- and 3.5-inch SATA drives. The most beneficial aspect of the motherboard's storage is that it supports as many as three SlimSAS ports for those enterprises wanting access to SAS-based solid-state drives. Rounding up the motherboard's rear is six USB 3.2 Gen 2 ports (one that offers USB Type-C connectivity), three audio jacks, and an individual VGA out connector. This board also provides RAID connections and extra panels for specialized use.

Users and enterprises can find more information about the two newest motherboards from Gigabyte on the company's website.