Gigabyte & ASUS have started rolling out their first AMD Ryzen 5000 CPU support BIOS for their X370, B350 & A320 line of motherboards.

Both ASUS & Gigabyte will be rolling out their respective X370, B350 & A320 motherboard BIOS to support the AMD Ryzen 5000 Desktop CPUs. The rest of the lineup will also be getting initial support for AMD's Ryzen 7 5800X3D which launches next month.

The newly launched AMD processors include Ryzen 7 5700X, Ryzen 5 5600, Ryzen 5 4600G and Ryzen 5 5500, Ryzen 5 4500, Ryzen 3 4100, bringing users more comprehensive options with various performance and pricing segments. Users can either get the optimal performance by X series motherboards with Ryzen 7 5700X processors or build a price-competitive platform of A series motherboards with Ryzen 3 4100 processors.

As for availability, the first BIOS's from ASUS are expected on the 25th of March while Gigabyte is claiming that their 300-series (X370, B350, A320) motherboards natively support the new CPUs & no new updates are required. As for the AMD Ryzen 7 5800X3D, both manufacturers claim that while they are definitely ready to offer support for the chip, it will be a selected release whether AMD allows it or not.

The updates can be downloaded from the ASUS support website. The previous generation ASUS motherboards will receive support for these new CPUs according to the table below: 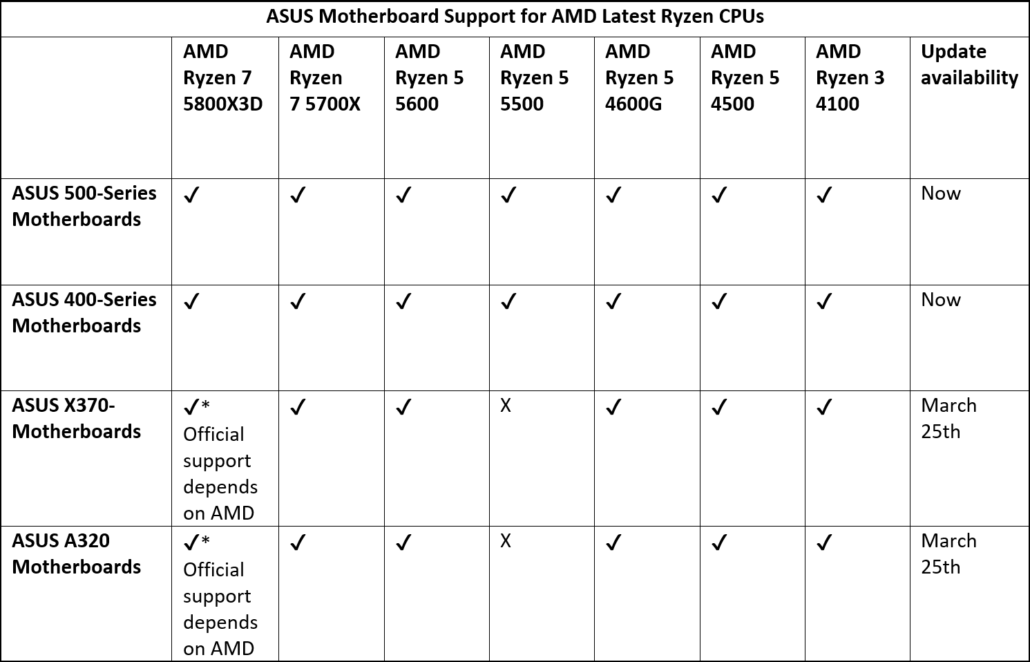 As for other manufacturers, MSI also recently started shipping its AGESA 1.2.0.6C BIOS for its 500 and 400-series motherboards which enables AMD Ryzen 7 5800X3D support though they are yet to launch their Ryzen 5000 Desktop CPU support BIOS. We have been informed that it will be coming soon but the 1.2.0.7 release isn't planned until late April and Early May. ASRock, EVGA, and BIOSTAR will also be landing their own support in the coming days.