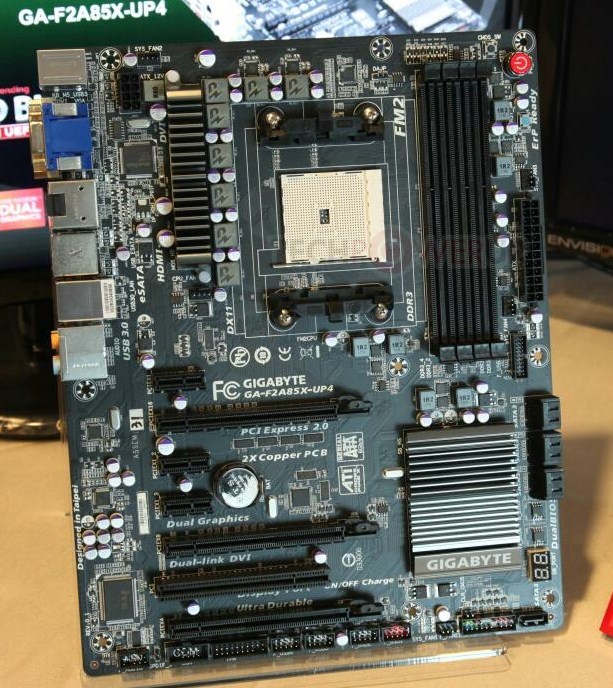 Today, Gigabyte had shown its first ever AMD FM2 socket motherboards to soon hit the market that were based on either the new AMD A85 FCH chipset or the previous gen A55 FCH chipset.

The F2A85X-UP4 on the other hand comes with top-tier VRM components that includes high-current ferrite core chokes and IR3550 PowIRstage driver-MOSFETs that are a part of the board’s 8-phase CPU VRM.

The socket is connected to four DDR3 memory slots that support speeds of up to 2400 MHz on overclocking and two PCI-Express 2.0 x16 slots along with three PCIe 1x and a PCI slot.

The A85 chipset churns out eight 6GB/s SATA ports with on F2A85X-UP4; one has been made eSATA while the rest are all onboard ports. There are a total of six USB 3.0 ports that split into four on the rear and two on the front.

Display wise, the board has a DVI, D-Sub, HDMI and a DisplayPort out that concludes this board is ready for tri-monitor eyefinity support. LucidLogix’s VirtuMVP is also on board with Gigabit Ethernet and 8 channel HD audio (ALC898) conclude the rest of the board.

Check out our source for more details regarding these new FM2 motherboards.